After finishing 3rd in Monaco and Canada, Daniel Ricciardo finally bagged his 1st win of the 2017 Formula 1 season at the Azerbaijan Grand Prix.

As the lights turned green, it seemed like the boys of Mercedes-AMG Petronas would dominate the race as the ‘Silver Arrows’ defend the front row. But Valtteri Bottas clipped the kerb at turn 2, sending him straight to Scuderia-Ferrari’s Kimi Raikkonen. Bottas had to limp his car to the pits for repairs and a fresh set of tires, while Raikkonen seemed to suffer minimal damage and kept on racing.

Amidst all the chaos at turn 2, the other Scuderia-Ferrari driver Sebastian Vettel and Force India’s Sergio Perez were able to make their way into 2nd and 3rd, respectively. Meanwhile, Red Bull Racing’s Ricciardo had to pit early as scattered debris entered his car’s brake ducts. On lap 8, Renault’s Jolyon Palmer had to retire after complaining that smoke came out of the back of his car. Turns out, his RS17 F1 car had an engine misfire, which only worsened throughout the race.

Toro Rosso’s Daniil Kvyat also had to end his race on lap 11 when his car suddenly shut down on the side of the track, which caused the safety car to be deployed. Red Bull Racing’s Max Verstappen retired on lap 12 due to his car’s oil pressure problems.

The race resumed on lap 16 but the safety car was quickly re-deployed due to the scattered debris on the track. Hamilton, who was in 1st place, decided to create more space between him and the safety car by slowing down. Vettel, who was behind Hamilton, was caught off guard by the Brit driver’s move, which forced him to run into the rear of the Mercedes. Enraged, Vettel gave Hamilton a tire-to-tire nudge, resulting to a 10-second stop-go penalty for the Ferrari driver.

As the green flags waved, the race resumed with more drama as Force India’s Esteban Ocon hits his teammate Perez, which caused a lot of damage. Raikkonen also had his own set of problems as his tires give way due to the debris on the track. Perez and Raikkonen both made it to the pit lane only to retire. 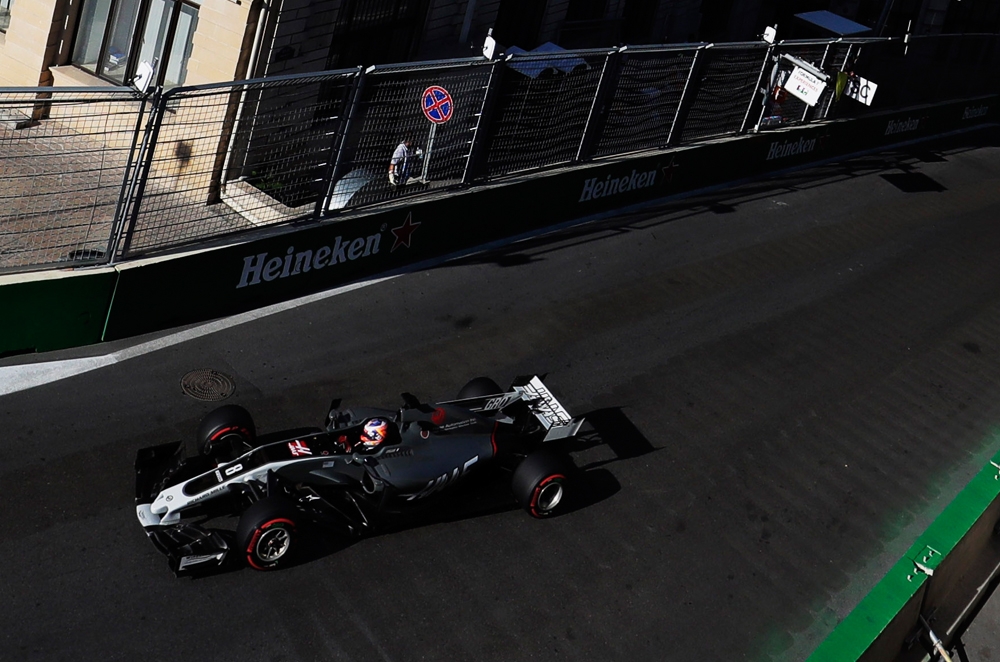 The incident between the boys in pink a.k.a. Force India caused the safety car to be re-deployed for the 3rd time. A couple of laps later, race officials decided to temporarily stop the race to allow marshals to clean the track.

The action resumed on lap 24 and so did the drama as Felipe Massa of Williams-Martini Racing had to retire due to a broken rear damper. Renault’s Nico Hulkenberg followed shortly after crashing his car on turn 7, breaking the car’s suspension.

Hamilton, who was still leading the race, wasn’t safe from the chaotic Azerbaijan Grand Prix as his headrest came loose. The Briton was forced to enter the pits to fix the issue and resumed racing in 9th place, while Vettel went in 2 laps later to serve his 10 second stop-go penalty and returned in 7th.

With this, Ricciardo inherited 1st place all the way to the end. Lance Stroll of Williams-Martini Racing, unfortunately, finished in 3rd after Bottas spoiled the Canadian’s race by overtaking him just before the checkered flag.

Stroll, who won his 1st ‘driver-of-the-day’ award, is now the youngest rookie driver to finish in the podium at 18 years and 239 days. This also makes him the 1st Canadian to finish in the top 3 since the legendary Jacques Villeneuve, who did it in 2001 for BAR-Honda.

Vettel and Hamilton made their way up the grid after their respective pit stops to salvage a 4th and 5th place finish, respectively. Ocon would follow behind in 6th, while Haas F1’s Kevin Magnussen settled for 7th after going as high as 3rd. Carlos Sainz of Toro Rosso managed to recover after spinning in the opening lap to cross the line in 8th.

After the Azerbaijan Grand Prix, Vettel still leads the drivers’ championship points with 153. He is followed by Hamilton with 139 points and Valtteri Bottas with 111.

The next race of the 2017 Formula 1 season will be at the Red Bull Ring in Austria, Germany on July 9.