After being globally introduced earlier this year, Ford Philippines finally brought the new Focus into our shores. This new compact sedan and hatchback promises a better driving experience with its improved looks, smarter features, and a new engine.

Although the new Ford Focus resembles its smaller brother, the Fiesta, it has a much bolder demeanor. It bears the new signature trapezoidal grille which keeps it inline with Ford's global branding. It also has wider wheel arches giving it a bulky and sturdy look.

The new Focus is now powered by a 1.5L EcoBoost GTDi engine which is smaller than the 2.0L engine of its predecessor. However, its deficit in size was countered by the power it can produce which can max it out up to 180 hp and 240 Nm of torque. Also, a more refined Electric Power Assisted Steering (EPAS) system further improves the driving experience with more precise steering and feedback to the driver.

Inside, the new Focus received an upgrade for its head unit with a bigger touchscreen LCD compared to the outgoing model. The SYNC connectivity feature that the previous model has also received an update with the SYNC 2 which allows the driver to operate the car's climate controls, entertainment system, and a linked smartphone with easy voice commands. To increase cabin quietness, a couple of material upgrades were also implemented such as sound-insulating windshield glass, thicker side-window glass, and thicker carpets.

Compared to the old parking assistance system that can only do parallel parking, the new Enhanced Active Park Assist can now do both parallel and perpendicular parking.

With one push (or two) of a button, the new Focus will steer and park itself for you using cameras and sensors installed around the vehicle. All you have to do is to concentrate on the pedals. And if ever you get into an unexpected tight parking spot, the new Park-Out-Assist system will aid you with that as well.

The new Focus also features the Active City Stop system that can lessen or avoid low-speed collisions. When needed, this system can pre-charge the brakes or even put the car in full stop if the driver fails to react in time. This is possible through a windshield-mounted sensor that can detect the motion of the vehicles in front. Though, this will only work if you’re running at a speed of 50 km/h or less.

At the launch, they set-up 2 courses so that the attendees could experience the new Focus by themselves. After all, there's no better way to try its new engine and features than a quick test drive. 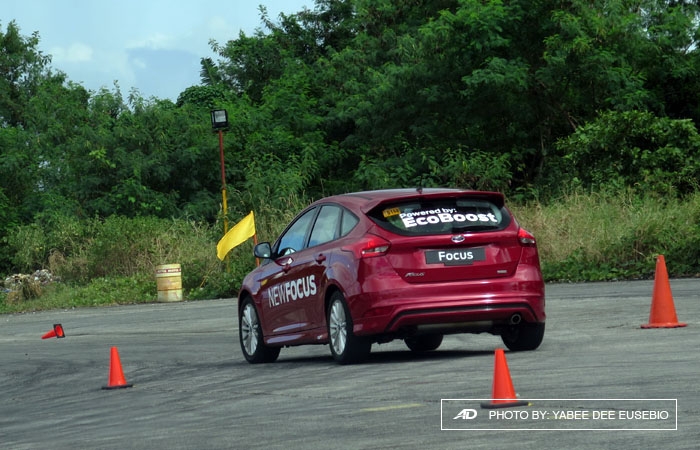 The 1st one was a short outdoor track where we were given 3 guided laps to test the new Focus’ agility and engine performance. Its new EcoBoost engine responded well with each step on the gas pedal which gave us a taste of its power on the main straight. On the other hand, the 2nd course simulated an indoor mall parking scenario where the new smart and convenient Enhanced Active Park Assist was demonstrated. Lastly, a low-speed collision was attempted but didn’t happen thanks to the Active City Stop system.