There have been reports circulating online that Ford will be expanding its Indian with two new SUVs built in partnership with Mahindra, namely in compact and subcompact sizes. Therefore, the upcoming vehicle shall share a number of components sourced from the Indian automaker. In conjunction with that, one of the upcoming vehicles was spotted in New Delhi while it was being unloaded at a cargo terminal. However, only one image has circulated online, therefore, showing a glimpse of its frontend which sports the brand’s latest design language.

Related: 5 affordable cars to buy on AutoDeal this December 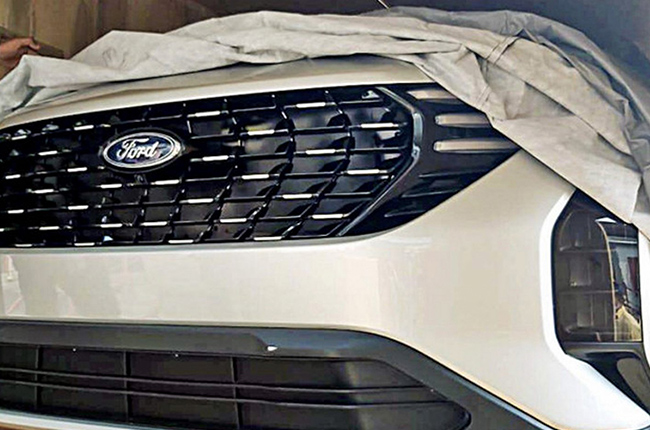 Again, the photo itself flaunts the vehicle’s black grille that’s both wide and frameless. What’s more noticeable though is the X-shaped bumper which adds a mean character on its fascia, top that up with a brushed-aluminum finished faux skid plate at the bottom. It was even pointed out that this SUV features the brand’s latest design language which has been applied on some of its current models such as the Ford Equator, which happens to be one of the brand’s midsize SUV that is flexible enough to seat up to seven passengers.

Given that the following vehicles will be produced in partnership with Mahindra, both upcoming SUVs shall share a number of parts from the Indian automaker, with Ford adapting some mechanical components including the chassis, suspension, as well as its engine options which should be tuned in accordance with Ford’s standards.

In relation to this, a heavily facelifted EcoSport is being expected, and by the looks of it, this upcoming subcompact crossover SUV might just conform to its dimensions. Though not entirely confirmed yet, reports then say that the new EcoSport is set to arrive during the middle of 2021.

While the Indian market may be the first ones to benefit from both of these models, let’s hope that the SUVs will serve as a potential addition to Ford’s Philippine lineup.