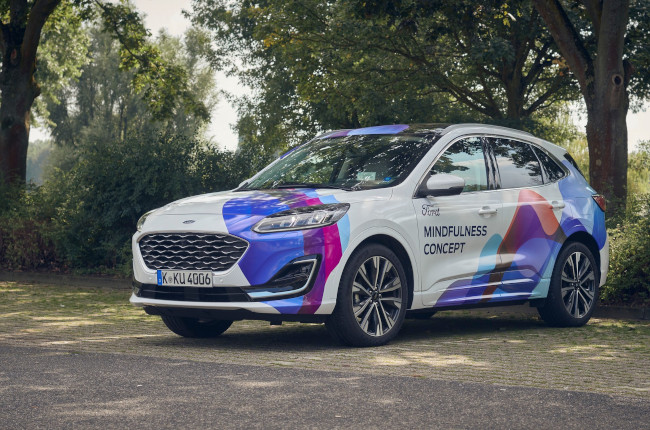 The Mindfulness Concept was applied to a Ford Kuga, similar in size to the Philippine-spec Ford Territory, the Kuga has a few modifications additions that make it a more mindful car, in a manner of speaking. While the bold livery and the video make it seem a little overreaching, the execution makes sense for people looking to manage their stress and anxiety. The carmaker has developed a system that includes a hygienic cabin air filter, a seat that stimulates a driver’s breathing and heart rate, and wellness guidelines to follow while on the road.

The Blue Oval published a video on its European YouTube channel, walking us through the features of the concept.

It starts with the keyfob or an app. Once the driver unlocks the vehicle, the Unlock Purge function is activated. Either that or he or she may use the application in their phone to turn on the feature. Unlock Purge utilizes the car’s air conditioning system to clean the air and freshen up the cabin before getting into the car. Ford’s premium filter removes all sorts of dust, dirt, and debris from the cabin. Even pathogens like bacteria are filtered out, and if that wasn’t enough, the car also boasts a UV-C light for extra sanitation for items and gadgets like your phone or your keys. The Mindfulness Concept car also includes a sort of massage seat that not only actuates but also provides feedback on breathing and heart rate. The system may also pair with wearables, allowing the car to collect heart rate data to allow the vehicle to respond appropriately.

Ford’s Bang and Olufsen system is also present in the concept. There’s also a nifty equalizer that allows users to fine-tune their listening experience based on their preferred mood. On top of that, there are headrests and headliner speakers that can blast the on-board playlist that include sounds of the ocean, or calming tunes.

To top all of that off, it even comes with instructions on how to do yoga, but you’d have to be parked in order to do that. Again, we’d like to reiterate that this is a concept. The features are still in their concept phase, but it’s not impossible for the Mindfulness Concept to end up in the spec sheets of some high-end Ford vehicles in the future.