After only recently launching the Icon EV crossover, Geely is yet again ready to launch another new vehicle for its global lineup. The new vehicle that the Chinese brand is eying to release soon is a 7-seater 3-row SUV. The brand teased this new vehicle via its Facebook page and posted pictures of the vehicle's exterior and interior. The name of this all-new vehicle is the Haoyue VX11 which when roughly translated to English means Heroic or Luxury when you take out the VX11 designation of course. it measures in at 4,835mm long 1,900 mm wide, 1,780 mm tall, and with a wheelbase of 2,815 mm. With these dimensions, it puts it pretty close to Mazda’s CX-8. Geely, however, through its Facebook post did not mention exactly when this new vehicle would launch but from the looks of it, it was set during the first quarter of 2020 but has been delayed due to the Coronavirus pandemic. On the exterior, it comes with the familiar Geely design queues that have been seen in other cars in the brand’s lineup. It comes with a muscular front face giving the vehicle a tough look while retaining the expanding cosmos grille. On either side of the signature grille is a set of L shaped LED daytime running lights as well as  LED head and fog lamps. It comes with a creased hood which adds to the vehicle’s muscular look, while also featuring lower bumper air intakes and a set of 19-inch two-tone wheels. While roof rails are not standard for the vehicle the higher-end trim level is said to get them. 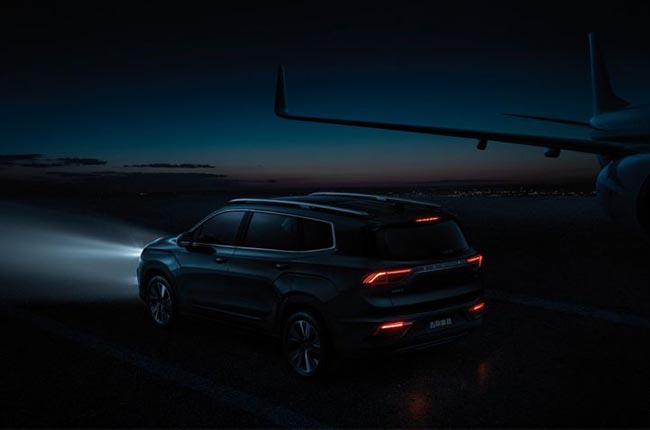 At the back of the vehicle is where things get tame. While the teaser photos don’t show much in the way of body lines, what can be seen is the vehicle’s rear lights. Just like the front these too receive the LED treatment and come in the form of rhombus-shaped housing with large LED strips for the taillights and for the third brake light as well. Moving on to the interior of the Haoyue, it comes with a two-tone design and features a black and gray interior. The Geely SUV comes with a square theme that can be seen on the door handles and vents which resonates with the rest of the cabin. Brown accent pieces can be seen next to the door handles as well as blue LED mood lighting. Moving to the roof a large panoramic sunroof can be seen. Moving to the front of the cabin a split give center storage area can be seen right behind the gear shifter along with a large touchscreen infotainment system. The Haoyue is expected to come with six airbags with ISOFIX points for the second and third rows.

Power options for the Geely Haoyue remain unknown but its possible sources are plentiful. Reports have suggested that it could come with the existing 1.5-liter gasoline turbo engine that comes in the Coolray and Azkarra. Still, other reports state that it could be coming with a much larger 1.8-liter engine instead. Transmission options for this new vehicle could either come in the form of a 6-speed automatic or a 7-speed DCT. While the vehicle’s launch date has not been specified yet it could be launching soon within the first half of 2020. With Geely still being quiet about the Haoyue's launch date looks like we will just have to wait until the Chinese brand releases more information about this SUV.