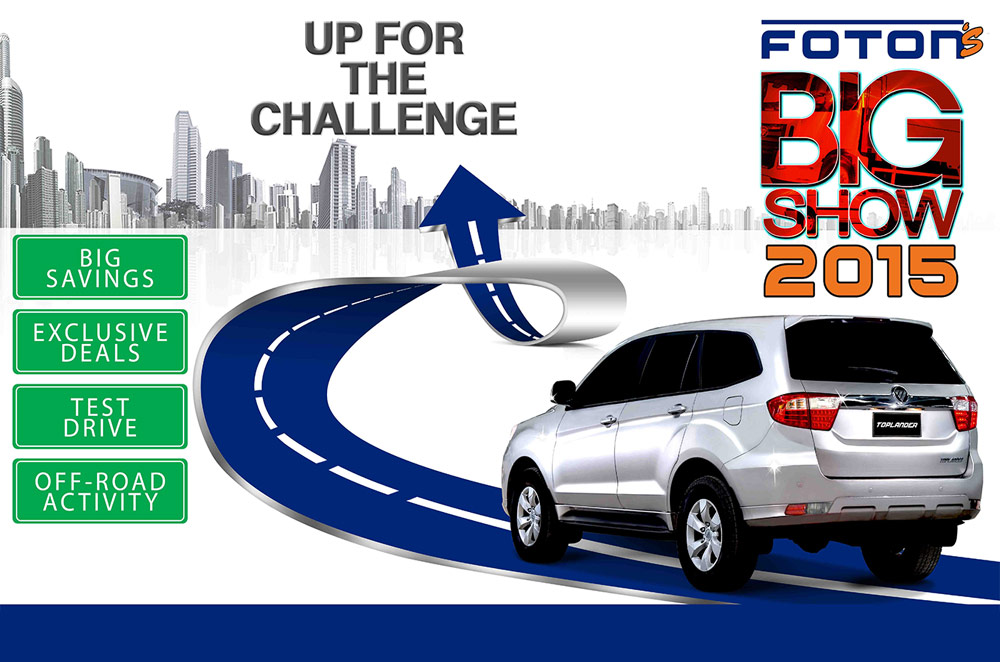 During the last 5 years, Foton has been showing off their biggest trucks at their annual event called the 'BIG SHOW'. And this 2015, they're doing it again with even bigger attractions.

For starters, they'll put their extensive line-up of commercial vehicles, including vans, pickups, light duty trucks, and heavy duty trucks, on display. Heck, they'll even bring with them their humongous heavy machineries that are more accustomed to construction and mining sites rather than an events hall. As an added bonus, Foton will also showcase customized versions of their vans/trucks that are designed to suit various business applications.

But the biggest attraction by far of this year's BIG SHOW is the launch of the first-ever Foton SUV called the Toplander. Set to go head-to-head with the likes of the Toyota Fortuner, Mitsubishi Montero Sport, Chevrolet Trailblazer, and Ford Expedition, it's reported to be powered by a 2.8L diesel engine sourced from Cummins. When it lands here, the Toplander will also be made available in both 4x2 and 4x4 configurations.

They're a bit mum though on the pricing, so we'll just have to wait 'til the show opens.

Finally, the BIG SHOW is the best place for private users and business owners to get BIG discounts when they either purchase or put in a reservation. Do check out the various ALL-IN financing deals and special freebies they'll be offering exclusively during the 3-day event.

See you at FOTON'S BIG SHOW happening from October 2 to 4, 2015 at the World Trade Center in Pasay City. The show is open from 10:00 AM to 7:00 PM and admission is absolutely free.