Hyundai Asia Resources, Inc. (HARI) officially introduced new models in the local market, welcoming December 2018 with a bang. Apart from the 2019 Accent, the Ioniq Hybrid enters the hybrid vehicle segment and will directly compete with the Toyota Prius. Before we delve deeper into its most technical aspects, let’s appreciate the car’s appeal. We can’t deny the fact that the car looks pretty with those sharp and aggressive headlights. It has a subtle version of Hyundai’s cascading grille that’s complemented by big trapezoidal air vents with daytime running lights (DRL) on the bumper.

The side profile gives you this familiar outline of what a hybrid hatchback (or liftback, if you want to be more technical about it) looks, well, like the Prius. It has this longer hatch tail, which gives an almost-sedan outline if you are to look at it on side-view. The rear fascia features a set of LED taillight, as well as a rear spoiler with high-mount stop light. Inside, the cabin has an electrically-adjustable driver seat and a 60:40 split-folding rear seats, all wrapped in leather for that upscale interior feel. The driver will be greeted by a flat-bottom steering wheel, a supervision type with Rheostat instrument cluster, and a five-inch display on the center console that features Aux, USB, and Bluetooth connections.

You won’t feel at stake inside the Ioniq Hybrid as there is a full fleet of airbags that envelops the entire cabin – from dual front to side and curtain, all the way to knee airbag for the driver. The car is equipped with smart keyless entry and an illuminated push-button start. While these features aren’t a new thing, especially to electrified vehicles in this day and age, it is important to take note that the Ioniq’s price range is significantly low compared to its well-established competitor. The Hyundai Ioniq is tagged at P1,498,000, compare that to the above-P2 million price range of the Prius. 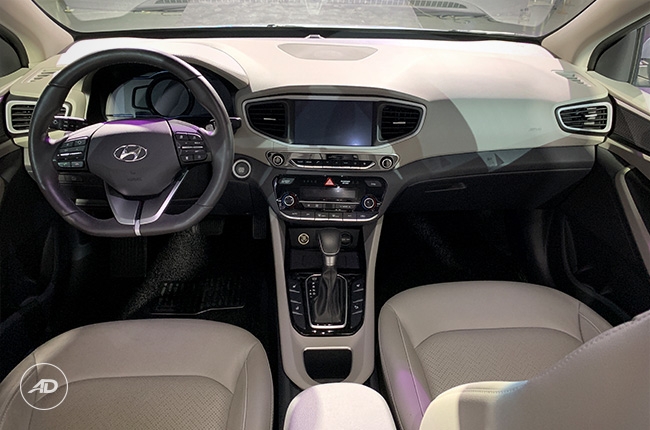 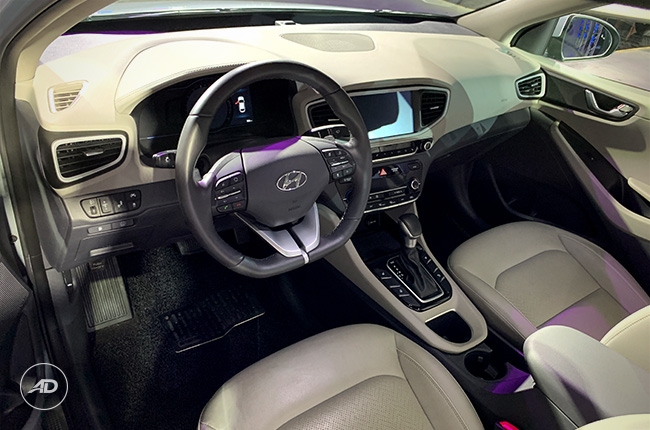 Powering the Ioniq Hybrid is a combination of a 1.6-liter gasoline engine and a Permanent Magnet Synchronous Motor (PMSM) electric mill. The 1.6-liter engine has a maximum power output of 104 hp and 147 Nm of torque, while the electric motor can churn up to 58 hp and 170 Nm of torque. Powering the electric motor, on the other hand, is a 240-volt Lithium-ion Polymer battery with a capacity of 1.56 kWh. Combining the two mills will give you 139 hp and 264 Nm of torque.

For a touch of personalization, the Ioniq is offered in three colors: Phantom Black, Polar White, and Aurora Silver. It comes with a five-year unlimited mileage warranty, plus the benefit of Hyundai Genuine Parts.