Lexus Philippines introduces a new member to their local lineup. The all-new UX subcompact luxury crossover doesn’t just look promising, it even vows to offer a more efficient powertrain with additional safety features. Truly, this Japanese crossover is for the modern urban explorer who seeks contemporary and dynamic lifestyle.

UX stands for Urban Explorer, which makes sense as the car is dedicated for exploring the city. It stands on the Toyota New Global Architecture (TNGA) platform, which it currently shares with the Toyota CH-R. This gave it what Lexus pertains to as “crossover credentials.” Boasting a range of new design elements, the UX freshens up the current Lexus lineup in the country. The design is inspired by the brand’s Cross-Create approach that mixes various elements to come up with new values. The front fascia is still being dominated by a huge ‘Spindle Grille,’ accompanied by a set of what looks to be lightning-shaped headlights. Vertical air vents on the bumper house the fog lamps, while chrome accents give depth to the whole design. The exterior and interior are designed with seamless continuity, breaking the boundary between the two. The cabin is inspired by the Japanese concept of Engawa, which is basically the traditional Japanese home design where the wooden floor extends from the inside and out resembling a mini porch. You may notice this more from the driver’s seat where the crease on the hood extends further all the way to the edge of the instrument cluster’s top cover.

“We focused on giving the UX a distinctive driving feel that would resonate with the customer. The UX delivers a strong safe feeling that, combined with a very dynamic dimension, sets crossovers apart from hatchbacks. I wanted to overturn the image of a crossover with a high body that requires careful maneuvering, and offer a car with agile performance and excellent maneuverability.”
Chika Kako
Chief Engineer of the Lexus UX

As a whole, the UX’s cabin is incorporated with Takumi (artisan) craftsmanship, which pertains to superior quality on the materials, plus a strict attention to detail. You may choose from the eight interior colors, including the new Cobalt and White Ash. The UX is also the first Lexus to incorporate the new trim grain finish inspired by the grain of Japanese paper known as washi. 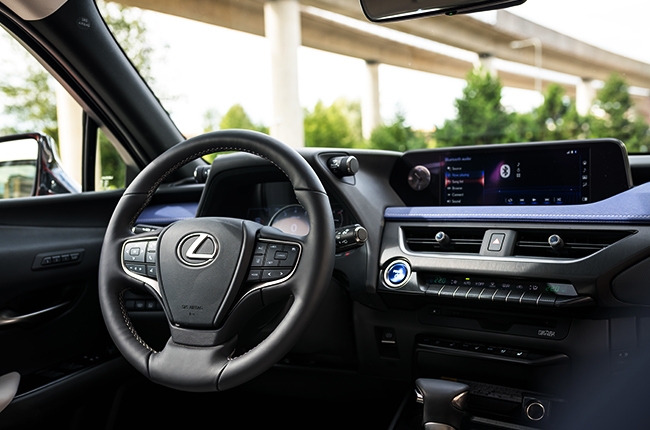 We can argue that the design should only be as good as the car’s performance. Good thing Lexus perfected this with a series of technical innovations that include the utilization of the new Global Architecture Compact (GA-C). With the GA-C, the UX promises high structural rigidity, low center of gravity, and better stability. Add the fact that the UX hides Lexus’ new 2.0-liter gasoline engine, capable of 168 hp and 205 Nm of torque. This mill is paired with a Direct-Shift Continuous Variable Transmission (CVT).

Related: Lexus makes side mirrors a thing of the past. Sort of.

To help the engine achieve better performance, Lexus designed the car with a new approach to aerodynamic performance. This includes the Aero Stabilizing Blade Lights at the rear for minimizing the wrapping around of the airflow. Lexus claims these stable the UX’s rear when turning and driving in crosswinds. Moreover, the subcompact luxury crossover is equipped with World First concept aerodynamic wheels complemented by the black wheel arch moldings. The all-new Lexus UX is available in two front-wheel-drive versions, which are the UX 200 and UX 200 F Sport. The model range comes in thirteen body colors in total, including three new ones: Blazing Carnelian, Terrane Khaki, and Celestial Blue. As of this writing, the UX 200 and UX 200 F Sport is offered at a Manufacturer’s Suggested Retail Price (MSRP) of P2,478,000 and P3,048,00, respectively.