The next-generation Ford Ranger has made its global debut. Ford says it has reimagined, redesigned, and reengineered the all-new model from top to bottom, and the result speaks for itself. The 2022 Ranger looks more refined and capable than ever before. The question is, could it shake up the mid-size pickup truck segment once again? This model year begins a new era for the Ford Ranger, one in which the customers have a lot more input about what makes and drives this truck. According to Ford, it gathered hundreds of hours' worth of customer insights to produce a vehicle that looks more athletic on the outside and more comfortable on the inside. 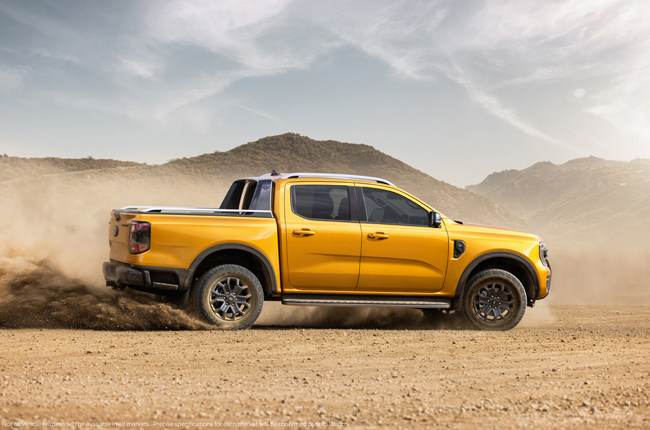 The result is a Ranger that looks unmistakably modern while retaining the nameplate's signature rugged style. There's a bolder grille with a bar that extends to the new C-clamp headlamps. Directly underneath, there's an H-shaped cladding that fits excellently with the daytime running lights (DRLs) and front bumper.

Over to the side, we see a strong shoulder line all around and sleek-looking wheel arches. The rear features redesigned tail lamps that complement the front's C-clamp setup. Ford also increased the Ranger's track and wheelbase by 50 mm each, allowing the truck to have a wider and more aggressive stance. Overall, we think the new Ranger looks more imposing than the previous generation model.

The Ranger's truck bed has also been redesigned for added utility and convenience. There's a new integrated side-step that sits behind both rear wheels for easier access to the bed. A new plastic-molded bed liner also helps ensure worry-free cargo loading. Plus, the added tie-down points sit on strong steel tube rails for added security.

For low-light cargo loading, Ford equipped the all-new Ranger with zone lighting. The new feature can be controlled with the in-cabin SYNC display to provide a 360-degree lighting experience in the dark. While the next-gen Ranger deserves praise for its exterior redesign, we can't overlook the effort Ford put into creating an all-new interior. Ford has always been near the top when it comes to cabin comfort, but the 2022 Ranger kicks things up a notch.

Ford designed the cabin with versatility in mind. Whether driving for work or with family, the new Ranger can fit every need. When the driver steps inside, they're immediately greeted by a 10.1-inch or 12-inch vertical touchscreen infotainment display. It complements the new fully-digital instrument cluster and comes with the latest Ford SYNC 4 system.

New for this year's model is a built-in modem that allows smartphone connectivity through the FordPass app. The modem unlocks a new set of features, including remote start, remote locking, and vehicle status checking. For added convenience, Ford also put a wireless smartphone charger on the new Ranger.

Ford moved many of the driving controls from the dashboard and center console to the SYNC 4 screen. It has resulted in a cleaner dashboard layout that we think looks immaculate. There's also a new 360-degree camera for seamless parking and off-road exploring. On top of that, the Ranger gets an available e-shifter for the automatic variants.

With the Ranger's comprehensive inside-and-out transformation, it's now better-equipped to go up against the top mid-size pickups out there. Customers have clamored for more power and torque from the Ranger, and Ford delivered. The clear highlight is a new 3.0-L V6 turbodiesel engine for maximum performance. Other powertrain options are also available, including the proven Single Turbo and Bi-Turbo 2.0 inline four-cylinder diesel engines. For lovers of gasoline models, the Ranger will be available with a new 2.3-L EcoBoost four-cylinder mill.

Keep in mind that the powertrain options will vary from market to market, and Ford Philippines has yet to confirm which engines it will be bringing to our country. That will come in a later announcement, but the turbo variants seem like a lock, seeing as the current-spec Rangers come equipped with these engines. The all-new Ford Ranger characterizes the "Built Tough" identity to a tee. As mentioned, Ford increased the front wheels forward by 50 mm to ensure an improved approach angle. The rear suspension dampers have also shifted outboard of the frame rails for a better overall ride.

Ford will offer customers a choice between two four-wheel-drive systems, an electronic shift-on-the-fly system, or an advanced full-time 4x4 system with a set-and-forget mode. Off-road mode selection can now be done through the center touchscreen display. Needless to say, testing the new Ranger's off-road might could be a treat when it arrives. The next-generation Ford Ranger will be built in Thailand and South Africa beginning in 2022. Ford will make eight colors available at launch. We most certainly will get the new model sometime next year, but Ford says it will announce specific market launch details at a later date. We'll have to stay tuned when Ford Philippines announces the local availability, engine options, and variants for the 2022 Ranger.