Nissan has officially debuted its highly anticipated sports car the 2023 Z coupe. The new vehicle now sports a twin-turbocharged V6 motor, an upgraded interior, and styling similar to the Z proto concept that made its presence known a little over a year ago.

The new sports car now comes with two available models at launch, a Sport and Performance package. There is also a special Proto Spec option available for those who want to get the top-end model that gives it similar looks to the prototype vehicle. 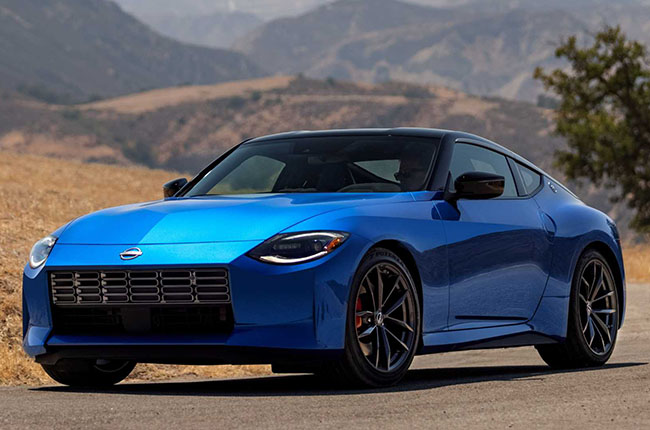 On the outside, all Z models come with a squared-off grille along with retro LED light fixtures that carry over from the prototype vehicle. Aside from this the production Z also carries over much of the prototype’s rear design. The sports car now has a large black partition at the back that extends the length of the bumper that also comes with large horizontal LED tail lights underneath. A gloss black diffuser is also present at the rear along with dual exhaust tips. For those who are getting performance models and up, expect to see a subtle rear spoiler integrated into the rear of the sports car. Moving onto the sides of the vehicle, expect to see a range of 18 to 19-inch rims available. While the entry-level Sport model utilizes a new design for its 18-inch wheels, the Performance variant gets the 19s previously seen on the prototype car. The Z coupe will also have a total of nine colors available at launch with special two-tone color options included. These two-tone paint jobs will be matched with a black roof and are available in the following colors: Brilliant Silver, Boulder Gray, Seiran Blue, Ikazuchi Yellow, Passion Red, and Everest White. For the single-tone variants, Nissan offers it in Black Diamond, Gun Metallic, and Rosewood Metallic. On the inside, the new Z coupe comes with a similar interior as its concept car counterpart. It blends modern styling and technology with a few classic cues to its cabin. The new sports car also comes with bucket seats that mimic those found in its Nissan GT-R stablemate. These seats are available in either standard black cloth or leather available for the performance trim.

One notable feature inside the sports car is its digital gauge cluster which takes inspiration from the original car it was based on the 240Z. It features readouts for the boost, turbocharger turbine speed, and a voltmeter. Aside from its digital display, the Z coupe also comes with an 8 or 9-inch touchscreen infotainment system at the center of the dashboard depending on the variant chosen. For the Performance model, it gains access to navigation along with wifi capabilities. Under the hood, the 2023 Z coupe is no slouch as it packs a 3.0-liter twin-turbo V6 that pushes out 400 hp and 475 Nm of torque. Power is sent exclusively to the rear wheels via either a 6-speed manual or via a 9-speed automatic transmission which is only available for the higher-level trims. The manual gearbox comes with a high-performance clutch, automatic rev-matching, and even a launch control system for the Performance trim. The automatic variant, on the other hand, carries over most of the same features as its manual counterpart but comes with the added bonus of a limited-slip differential along with aluminum paddle shifters.

The new 2023 Z coupe will reportedly be sold in the US for between $34,000 to $40,000, however, Nissan has yet to announce its official pricing in the country yet. With that in mind, it may take some time for the new sports car to officially make its way into the local automotive market. Only time will tell as Nissan Philippines has yet to release an official statement.