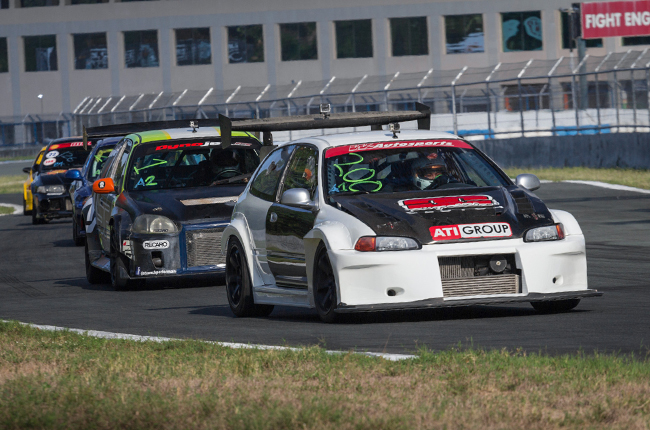 The second round of the Petron FlatOut Race Series (FORS) saw its biggest turn out in recent years with a total of 151 entries, providing plenty of on-track action at the Clark International Speedway (CIS). The race also showcased its newly-formed Supercar Class, which featured exotics such as the Nissan GT-R and Porsche 911 GT3 RS. During the time attack session, Rafael la’O in his Staunch Performance Honda Civic EK was once again the quickest in Bracket R and Bracket A with a lap time of 2:03.899. Eduardo Suiza in the newly-built W-Autosport / Staging Lanes Honda Civic EG nabbed second while the young Gabby Sohu from Team Nawna Racing completed the podium places.

Meanwhile, the Autoholic Garage R35 driven by Aga Tomawis recorded the best time of 2:09.945 for the Supercars Class.

In Bracket B, the middle Sohu brother, Raffy, took set the fastest lap with a 2:16.142. The 15-year old youngster was followed by Dominique Bon and Russ Agapito in second and third, respectively.

Of the 14 drivers in Bracket C, Paul Santos in the Big Chill Racing Honda Civic FD bagged the win after he crossed the finish line just 0.061 seconds faster than the youngest of the Sohu siblings 13-year old, Miggy. Sydney Sarmiento of Blanche Racing claimed the final position of the podium.

As for Bracket D, it was Alvin Bince with his 2:24.557 lap time who took top spot, followed by Robert Tan in second and Mike Hortel in third. Avin Villasenor got back-to-back wins for Bracket E, while Mars Ocampo and Gilbert Orpilla were fastest in Brackets F and G, respectively. The main race of the day featured Grid A, B, and C combined together to make a 19-car field. La’O pounced on a rare mistake from Suiza to win the Petron Grid A race. For the KYB Grid B, it was Paolo Santos in his Mitsubishi Evolution 6 that finished ahead of his rivals Jun Cabrera and Agapito. Meanwhile, 2016 8 Oras ng Pilipinas winner Emerson Ocampo win in Recaro Grid C.

The next round of Petron FORS will happen at the Batangas Racing Circuit (BRC) on May 19, 2018.