The 2020 Suzuki S-Presso is set to launch in the Philippines sometime in the month of March. With no official date mentioned by the Japanese automaker, we decided to speculate. Here are a couple of things we can infer about the vehicle’s specifications with the basis for these speculations coming from the Indian version. It is already on sale in the country and comes with a complete specifications list. Under the hood of the Indian S-Presso is a 1.0-liter naturally aspirated engine. It utilizes the same K10B found in the Celerio hatchback and the HEARTECT platform. Power figures are the same coming in with 67hp and 90 Nm of torque. On paper, it's not a lot, but you also have to factor in the vehicle’s weight. Without any passengers, the 2020 Suzuki S-Presso weighs in at 767kg but fully laden the small subcompact crossover can be as heavy as 1170kg. Even with a full load, the vehicle is still light and its powerplant matches well with its intended purpose of being a small city runabout. That said the vehicle comes with a small gas tank that can only store 27-liters.

Putting the power down to the front wheels in the Indian version is either a 5-speed Auto Gear Shift (AGS) transmission which is similar to the Dzire’s or a 5-speed manual. If the Philippine variant of the vehicle will get these two gearbox options the higher trim-level might receive the AGS transmission. The 2020 Suzuki S-Presso measures in with a length of 3,565 mm. That equates to a little over 3.5 meters, not much, but the Japanese brand has been known to maximize cabin space in its vehicles. Next is the width, the small subcompact crossover comes in at 1,520 mm. The vehicle’s height in the Indian market actually varies depending on the tires used, but here is a ballpark figure. You can expect the S-Presso to measure in between 1,549 to 1,564mm. Ground clearance for the small subcompact crossover measures in at 180mm, putting it 5mm shy of the Ertiga. Finally, the vehicle’s wheelbase comes in at 2,380mm.  Even with a small form factor, the S-Presso can still seat 5 average-sized adults comfortably. Infotainment system options are limited for the Indian version of the S-Presso as most of the variants get a simple 1-DIN head unit with the top-of-the-line variant getting a 7-inch touchscreen infotainment system. The 7-inch system gets Apple CarPlay and Android Auto capabilities as well as Bluetooth, the sound is sent through a 2 speaker sound system. All the Indian variants of the S-Presso come with a Dynamic Center console, High seating for commanding view of the road, three front cabin lamps, and a sun visor. Other features of the interior include an accessory socket for charging purposes, a front console utility space, a 1-liter bottle holder on the front doors, reclining front and sliding seats, keyless entry, and power windows. The interior comes with a black theme with a red fabric being used an accent to the black fabric seats. Wheels are another factor to consider as the spy photos have revealed the Philippine units to only come with small steel wheels. Over in India, however, the S-Presso comes with an alloy wheel option. While it isn't confirmed yet that all the local models will come with steel wheels, here’s to hoping at least one variant will show up with alloys. Sizes for the Indian version come in two sizes. A much smaller 13-inch wheel and a bigger and wider 14-inch wheel. The 13-inch wheel accommodates a 145/80 tire while the 14-inch variant gets 165/70 tires. 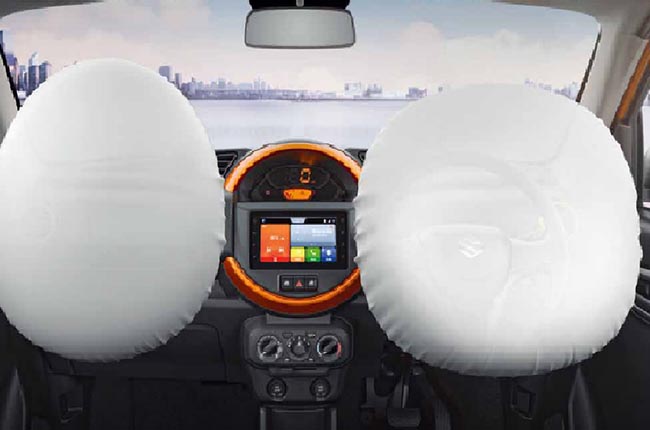 For safety, the Indian S-Presso features dual front airbags, ABS with EBD, seat belt reminder with buzzer, reverse parking sensors, and a speed alert alarm. While rather limited it is important to remember that the vehicle will supposedly have a price tag around the P500,000 range so compromises might have to be made for the Philippine version.

With substantial features for such a small car, it’s not hard to see how the Suzuki S-Presso could be a big hit in the Philippines. If the rumors about its attractive pricing turn out to be true, this will be Suzuki’s S-Presso shot (pun intended) into the small subcompact crossover segment.