The Skyway Stage 3 has already proven itself as a useful road for decongesting the main thoroughfares of Metro Manila. The elevated road itself serves as an extra link between the southernmost and northernmost points of the NCR. This gives motorists a bridge to utilize when they need to get from NLEX to SLEX. The expressway also gives motorists the ability to get from Quezon City to Buendia in Makati in about 15mins making travel much faster than it was before. While the expressway itself is officially open and is free to use until February 1, 2020, the question still remains as to what will the toll fees be like?

In 2014 the proposed toll rate for the roadway was initially supposed to be P134 from Buendia to Balintawak, however, a petition in December 2014 raised that fee up by 10.45% to now make it P148. That proposed fee is not yet final and is still pending adjustments upon the opening of Skyway Stage 3. It is important to note, that these fees still do not have VAT tax added to them. In 2017 yet another toll hike was proposed for the elevated roadway, elevating the toll further, no pun intended, to P203 for class 1 vehicles, but this time VAT inclusive. With the roadway fully opened, a new proposal was given out and is expected to raise the toll even higher than its 2017 counterpart to account for a new variety of factors.

Thanks to a document published by the Toll Regulatory Board (TRB) we can now get a clearer picture as to what you can expect to pay when using the new expressway. 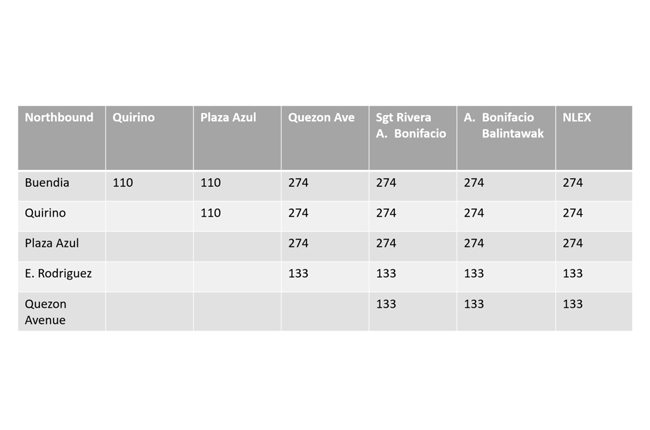 While the document did not specifically say that those are the proposed fees for Class 1 vehicles, we suspect that they are. Given that these aren’t the official toll fees yet, it’s clear to see that traversing through Skyway Stage 3 on a daily basis will not be cheap. Depending on where you exit, at its most affordable it will cost you 110, while at its most expensive it will cost you P274 to traverse the whole length of the road. If you plan to use it daily then prepare to allot a good amount of your budget as it can quickly cost you thousands of pesos to use monthly.