During the morning’s time attack session, it was Dondon Portugal who dominated Bracket R. He was able to set the fastest lap of the day with 1:43.239 using his Maptan Logistics Mitsubishi Lancer Evolution 7 with slick tires to take top spot in Bracket R. Rafael la O’ in his Staunch Performance Honda Civic EK came in second, more than a second behind.

In Bracket A, the results switched up as la O’ bounced back with a 1:47.023 lap time while Portugal was just 0.570 seconds behind. Eduardo Suiza in the W-Autosport / Staging Lanes Honda Civic EG finished in a distant third.

Royce Sarmiento topped the charts for Bracket E with his 2:05.029 lap, finishing ahead of Mark Anton David in second and Jack Saquilayan in third. Amiel Del Mundo reached the checkered flag in Bracket F first followed by Kody Ng in second, while Francisco Blanco made it in third. Meanwhile, Allen Escoto in Bracket G recorded the fastest lap in their class beating Motorsport Development Program (MSDP) graduate Gabie Desalles in second. 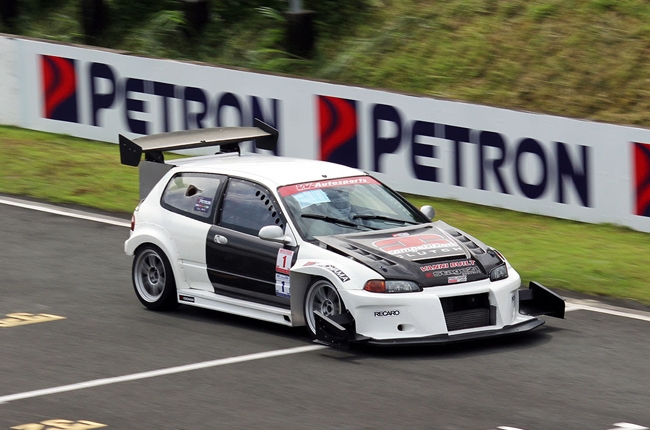 The grid race saw an exciting 10-lap sprint in heavy rainfall. Portugal and la O’ were left to battle it out in Grid A as Suiza didn’t make it to the grid due to mechanical problems. Sadly, Portugal retired mid-way.

But this doesn’t mean that la O’ had an easy win as KYB Grid B driver Henderson Perez hounded la O’ until the finish line. With this win, la O’ holds a slim six-point lead over Suiza with three rounds to go.

Meanwhile, Perez claimed the top spot of the podium in the KYB Grid B followed by Bubi Camus in his turbocharged Mazda MX-5 in second. John Benedict Carbonel, Julian Diego, and Carlos Marzo filled the top three positions for the Recaro Grid C, respectively.

In the SmartFuels 2 Race Grid E, Kody Ng and Mars Ocampo were first to the finish line but broke out their brackets, demoting them to second and third, respectively. This handed the win to Jeff Pobradora.

The next round of the Petron FORS will be at the Clark International Speedway (CIS) on August 11, 2018 and will run in conjunction with the Formula V1 Challenge.