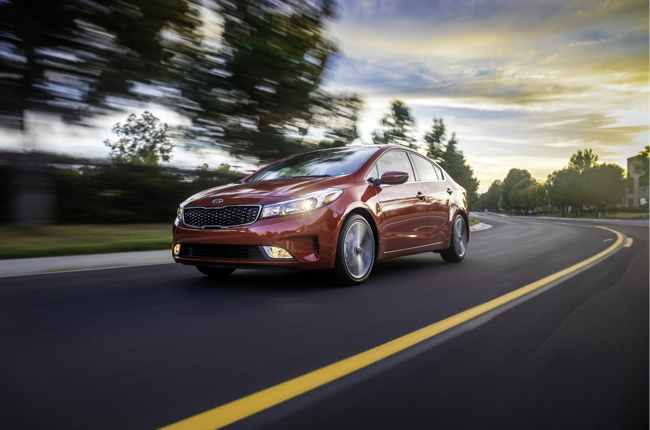 Kia has given the Forte sedan a handful of notable updates for 2017. It now features a refreshed exterior design, advanced driver assistance systems, new powertrain, and a new sportier variant.

Let’s start things off with the bolder fascia design. The styling revolves around the new bumper and the Korean carmaker’s updated “tiger nose” grille. The said grille is now wider and connects better with the new high intensity discharge (HID) Xenon headlights. Best part is that this refreshed fascia can be optioned in 2 design motifs; one that highlights the car’s classy demeanor and one that shows its aggressive side.

As for the rear end, designers fitted the car with redesigned taillights that can now be optioned with LEDs. Adding to the Forte sedan lineup is a new S variant which is slotted between the entry-level LX and range-topping EX trims. The S variant represents a sportier option for the customers as it boasts sport-tuned suspension, 16-inch alloy wheels, LED positioning lights, rear spoiler, and a chrome exhaust tip.

Inside, it shares the same cloth interior with the LX trim. It, however, comes with black cloth seats with white stitching and leather-wrapped steering wheel.

Meanwhile, the EX trim features Smart Key with perimeter approach lighting and new 17-inch alloy wheels. Kia also threw in interior amenities like leather upholstery and 2-zone automatic climate control. It also has a 7-in touchscreen infotainment systems with UVO3 telematics, which it shares with the S trim. Lastly, under the hood resides a new entry-level 2.0L inline 4-cylinder Atkinson cycle engine that produces 147 hp and 179 Nm of torque. This is mated to either a 6-speed manual or a newly-engineered 6-speed automatic transmission. The current 2.0L inline 4-cylinder GDI engine which makes 164 hp and 205 Nm is still available with the said new automatic gearbox. Although last year’s 1.8L powerplant was shelved for the mean time.