Toyota Motor Philippines (TMP) has officially launched the refreshed 2021 Toyota Hilux. The leading mobility company has been on a roll recently with back to back vehicle launches. First, it was the Wigo, the Vios, then the all-new Toyota Corolla Cross. Now, however, the spotlight goes to the brand’s popular pickup the Hilux as it makes its official debut in the country. It brings with it new robust styling while maintaining the durability and reliability that buyers and owners alike have to come to love.

Like before the refreshed Hilux comes available in three regular trim-levels and three variants that are aimed for commercial use. The Japanese pickup truck can be had in either the Conquest trim, the G trim, the E trim, and the J trim. A cab and chassis, Cargo, and FX version of the vehicle will be available as well but will be entering the market at a later date. On the outside, the Toyota Hilux looks similar to its United States bound counterpart the Tacoma. The Hilux now features a more squared appearance thanks to a new grille and a new set of LED headlights and tail lamps for the higher models. Higher trim-levels also new LED fog lights to complete the lighting element suite. The popular Japanese pickup truck now also comes with new fender flares around the vehicle giving it a more tough and athletic appearance. Topping off the new changes to the vehicle is a new set of wheels for all of the variants. It is important to note that the range-topping Hilux Conquest gets a set of blacked-out wheels and a sports bar at the back.

The 2021 Toyota Hilux can also be had in the following colors:

Toyota is also giving interested buyers the opportunity to customize their 2021 Hilux with a new set of accessories that can help give their pickup truck a unique look. These new accessories include the following: Overfenders, front underrun, side moldings, roof ornament, side visors, Bedliner, sidestep board, rear bumper, a special set of alloy wheels, hood lift assist, tailgate lift assist, front and rear video records, wireless charger, a heads up display, an emergency kit, and finally a coolbox for added convenience. 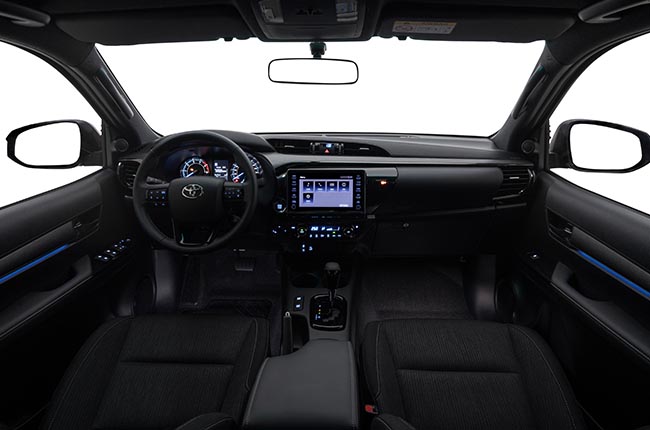 On the inside, the 2021 Toyota Hilux retains a similar look and feel to that of the previous model. While not much has changed its whats underneath that has been tweaked. The Conquest to E grades now come with keyless entry with the highest trim-level getting access to Smart Entry and a Push to Start System. 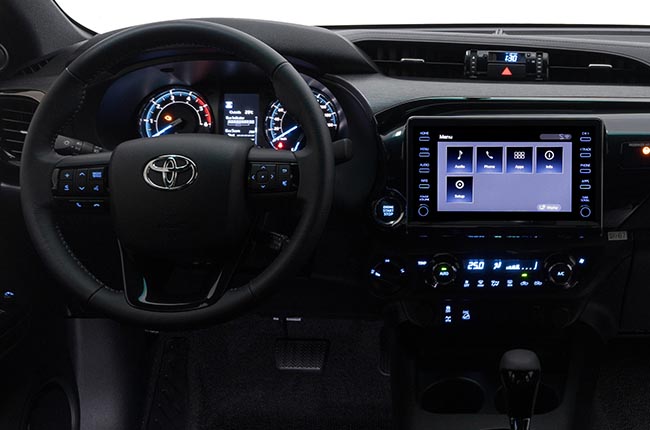 The technology inside the 2021 Toyota Hilux has also been updated. It now comes with a new 4.2-inch TFT multi-information display and easily accessible controls via steering wheel switches. Apple CarPlay and Android Auto are now standard for the Conquest, G, and E grades in the form of a new 8-inch infotainment system making it easier for owners to connect their smartphone to the vehicle. Conquest variants also gain access to cruise control making the vehicle easier to drive on long haul trips. To match its new exterior the refreshed Toyota Hilux also gets more power under the hood. Just like its Thailand counterpart, the 2.8-liter turbo diesel more has been updated to produce more power. It now makes 201 hp and 500 Nm of torque for the AT making it one of the more powerful pickup trucks in its segment. It is important to note that the manual version of the 2.8-liter engine only makes 420 Nm of torque.

The 2.4-liter turbo diesel engine also gets a boost in power. It now produces 148 hp and 400 Nm of torque. Similar to the pre-facelifted version the Hilux can still be had with either a 6-speed automatic or 6-speed manual transmission. Toyota states that with these engine owners and interest buyers can expect a 4-5% improvement in fuel efficiency compared to the previous model. It is important to note that the fleet spec variants of the Hilux may have lower torque figures compared to that of the regular variants of the refreshed Hilux.

Toyota has made the Hilux even safer than ever before. The Conquest variant now comes with 7 SRS airbags for its 2.8-liter 4x4 variant. Added safety features 3-point ELR seat belts for all occupants, ABS with EBD, vehicle stability control, and Hill-start assist. The Hilux Conquest 4x4 also comes with downhill assist control and active traction control. Clearance sonars are also available with the vehicle, however, they can only be had with the Conquest and G trims, a reverse camera has also been added to the range-topping model.

The 2021 Toyota Hilux will be available at TMP’s 70 dealerships nationwide by September 14, 2020, for the Conquest, G, and E variants. The Hilux Cargo variants will be going on sale at a later date on October 26, 2020. The new pickup truck is also available for viewing at Toyota’s virtual showroom for those who want to get a closer look at it from the safety of their own homes.