Public transportation restrictions have slowly eased over the past few months, with passenger capacities increasing to 70 percent under Alert Level 2. That said, the holiday season usually demands a different approach. It could be why the LRT-1, LRT-2, and MRT-3 have special schedules around Christmas and New Year's Eve.

If you're using these railways to get yourself around town during the holidays, knowing their Christmas schedules may come in handy. Otherwise, motorists traveling in vehicles could avoid traffic spikes by using alternate routes like the Skyway Stage 3 and other available expressways. 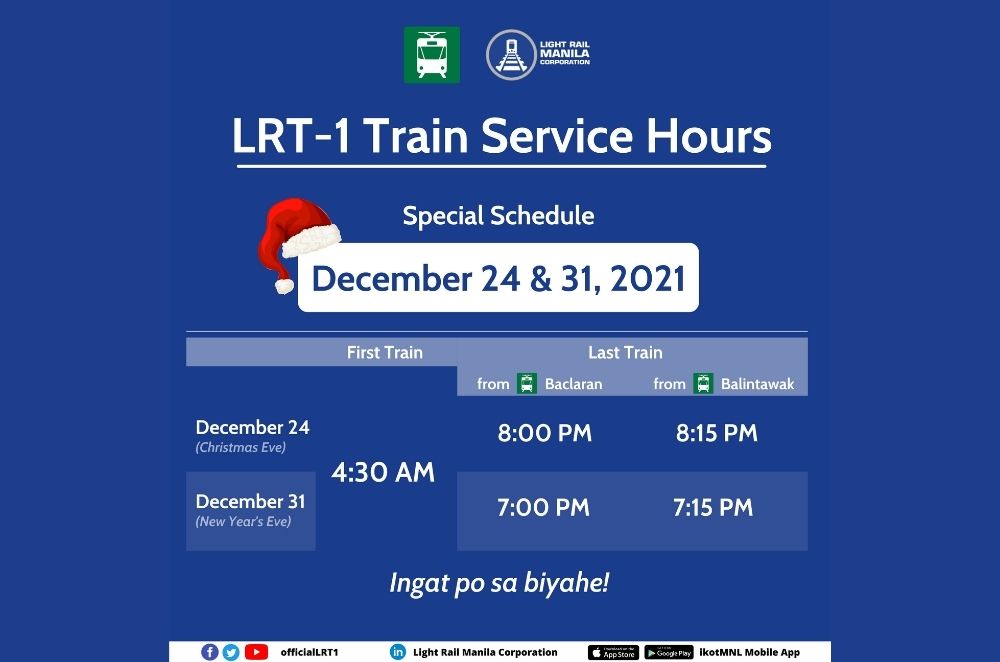 The country's oldest street-level rail line will run with modified operating hours. The Light Rail Manila Corporation (LRMC) offered the following schedule: On December 24, the first trains will leave the stations at 4:30 a.m. The last trains will depart Baclaran station at 8 p.m. and Balintawak station at 8:15 p.m.

On December 31 or New Year's Eve, the last set of LRT-1 trains will leave Baclaran one hour earlier at 7 p.m and Balintawak station at 7:15 p.m. On December 25, December 30, and January 1, the LRT-1 will follow regular holiday and weekend operating hours. Meanwhile, Roosevelt station continues to be closed due to construction. The Light Rail Transit Authority (LRTA) announced the following Christmas schedule for the LRT-2: On December 24, Antipolo-Recto trips will begin at 5 a.m. and end at 8 p.m. On December 25, the last trip will be half an hour earlier, at 7:30 p.m.