Finally, Toyota debuts the third-generation Century after a gruesome 21 years of waiting. Yes, the cutting-edge model has been in the marque’s lineup for more than two decades and serves as Toyota’s flagship model within Japan. Its concept version was revealed at the 2017 Tokyo Motor Show.

The history of the all-new Century dates back to 1967 when it was first produced to commemorate Sakichi Toyoda’s centennial birthday. It did receive minor changes after that until a major redesign in 1997. The Japan-only executive vehicle has been Toyota’s ultimate model for craftsmanship and design, making it a go-to choice of government officials, members of the Imperial House of Japan, and other high-level businessmen. Although it keeps it classic look of wide ornate grille, boxy exterior, and minimalist approach to lines, the Century has been redesigned high-quality monozukuri (all-encompassing manufacturing) in mind. Of course, the phoenix emblem remains as the symbol of sophistication with its vibrant movement of the wings and delicate feathers.

According to Toyota’s press release, the marque focused on creating a regal rear space for the chauffeur-driven model. By straightening the slope of the C-pillar, the design focus is shifted to the rear, to encompass the importance of the person sitting at the back. That’s just fitting, as to whoever will own one of these luxurious car must someone really important, especially in Japan.

The newly-developed eternal black paint, called Kamui, consists of seven layers, including a clear coat that contains black paint for a lacquer finish. A wet sanding technique has been done three times on to the car to smooth out even the minute flaws. To finish it off, the Century gets a mirror finish.

The cabin of the Century is naturally a host of plush, elegance, and fine materials worthy of the car’s emblem. Wood trims and specially-designed fabrics shower the front and rear cabin, while the 65mm increase in wheelbase extends the legroom at the rear. The space from the lip of the door to the floor has also been trimmed by 15mm for easier ingress and egress. Lastly, air-conditioning, massage function, curtains, and 12-channel 11.6-inch entertainment system can be controlled through the 7-inch touch panel at the rear center armrest. 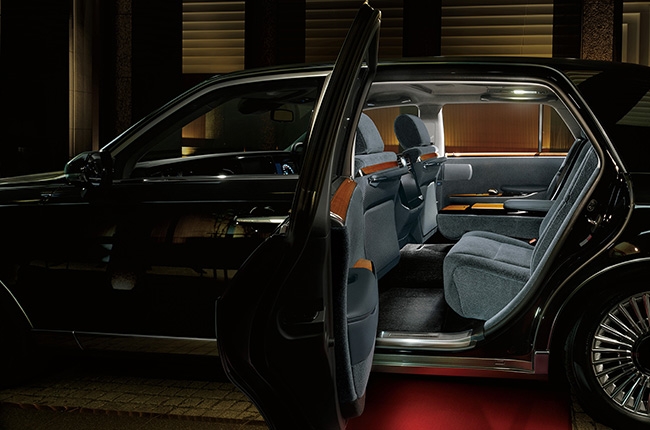 The Century is powered by a 5.0L V8 hybrid system that promises outstanding fuel-efficiency without compromising performance. The fossil fuel engine delivers 376 horsepower and 510 Nm of torque, while the motors add 221 hp and 300 Nm powered by a Nickel-metal hydride battery.

Two new features are also added to the luxurious sedan that highlights further the importance of the one being chauffeured in. HELPNET is an automatic emergency reporting system that activates when the airbags are deployed. D-Call Net, on the other hand, make quick decisions to dispatch air and ground ambulances if the vehicle data states that the accident is severe.