Does it come in black? –  those were the first words that came into my mind when Lexus Manila confirmed the lend out of the LS 500. With its limousine-esque size and appeal, it’s really hard not to imagine this flagship model as a boss’ car, a vehicle for someone who has authority and power (not the superheroes-in-spandex type of power), and what color best represent those two words than black, right?

Indeed, my wish came true and the LS 500 arrived in black, and it couldn’t get any classier. If I told you that seeing the LS 500 face-to-face wasn’t thrilling—with its key fob on my hand and 82-L fuel tank filled to the brim—that would be a blatant lie. After all, this is Lexus’ first sedan and its ultimate creation, and expecting the best from Toyota’s luxury arm is an understatement.

Performance
Engine Output (HP), Acceleration, Transmission, Handling 4.5/5
Design
Exterior & Interior Design, Quality, Fit and Finish, Ergonomics 5.0/5
Ride Comfort
Cabin Comfort, Suspension, NVH Insulation 5.0/5
Safety and Technology
Convenience Technologies, Active and Passive Safety Features 4.5/5
Value for Money
Amount of the vehicle you get for the price, Fuel Efficiency 4.5/5
What You Will Like
What You Won't Like
How We Do Our Reviews Now, let’s face it, when you look at the history of the LS all the way back to 1989, you’ll definitely agree that the previous-generation models were rather plain and boring, aesthetics-wise. You may even say they’re vanilla. That’s fine, at least in our books, because the LS is the epitome of luxury for Lexus, and edgy exterior design execution wasn’t the marque’s priority before.

Thankfully, that was a thing of the past. This fifth and current generation LS, the LS 500, is a far cry from its predecessors. It has definitive curves, sultry lines, and fastback profile, which all sum up to the car’s sexy appeal. It’s like a lady in a skimpy black dress; really attractive without losing its sense of class. One of many things that make the LS 500 stand out on the road is its chrome-lined spindle grille that serves as your appetizer to this lavish three-course Lexus meal. To complement that, whisker-like accents crown the daytime running lights and three-eye Bi-Beam LED headlamps with cornering lights.

The main course, however, is the LS 500’s overall form. It has long hood and short rear, with sloping lines that make it look like a fastback. Combined with its low and wide stance, it’s sporty as ever, but not too much; you can leave the sportiness to its coupe brother, the LC 500.

For dessert, well, the sequential LED turn signal lamps and 19-inch aluminum rims can surely fill your sweet tooth and the perfect finisher to your meal. 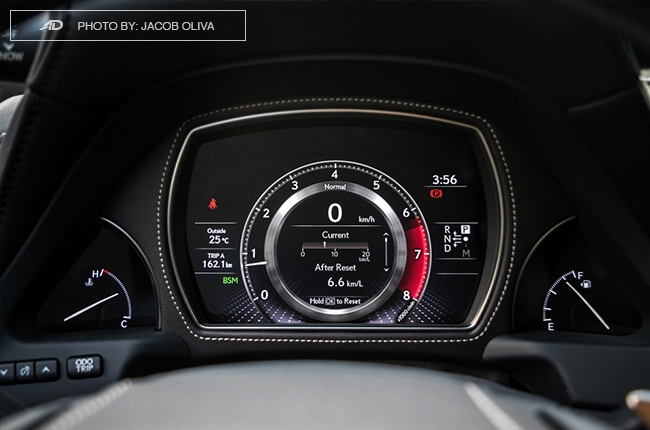 While the LS 500 is a feast to the eye on the outside, its interior is just as tasty and palatable. The media unit came with black semi-aniline leather package, accentuated by Shimamoku wood grain inserts and brushed steel surfaces. Every piece that you lay your eyes and hands on is a masterpiece and radiates a relaxed feeling for the car’s occupants.

The feeling you get while inside the LS 500 just raised the bar when it comes to level of comfort. For its four occupants (or five when the rear-center armrest with control panel is folded up), there’s not a single sense left unfulfilled and wiggle room is unquestionable. To start with, it’s equipped with quad-zone climate control, which means you can control the air conditioning in each individual seats. Nanoe air purification system is also on board, but it’s nothing compared to the high-fidelity, 24-speaker Mark Levinson Quantum Logic Immersion (QLI) Reference scattered all over the car's interior.

The front cabin is one of the best places to be in inside the LS 500. Aside from the 28-way power adjustable seats with memory function, it has a Refresh setting, which translates to shiatsu massage in Lexus’ language. It was a trip, but I wish I can say the same for the touchpad control of the huge infotainment system. Just like with the other Lexii, this is still the weakest link as it takes some time to get used to. The rear seats, on the other hand, is nothing short of luxury, too. There are two recliners with power adjusters, while you can put up shade on the windows and rear windscreen when it gets too sunny. The noise isolation is also superb; the only sound you’ll hear inside is the rumble of its V6 engine (more on this later). Well, it better be, as this is where important decisions in life are made – like what’s the next business to put up, or whether your next vacation would be in Paris or Rome.

Even novelties like door pockets and vanity mirrors are available for rear passengers, and the hi-fi speakers sound as good at the back as it is in the front. Lastly, trunk space is ironically ample even with the LS 500’s shape. Its lid can also be closed and opened with a touch of a button, or through a kick under the rear bumper. Nifty! While you may think that the LS 500 is the ultimate comfort machine that only spoils its passengers, the power plant under its hood tells otherwise. As the driver, you’ll get every convenience and pleasure the other occupants’ receive, but you have an ace up your sleeve – you get to control the 3.5L V6 biturbo gasoline engine under the hood. Whether you want to drive slowly or you want to spice it up with some kick from the engine, the LS 500 does so effectively. Its default Normal mode can already give you the satisfaction, but the Sport S and Sport S+ will make you stay in the driver’s seat more. The 416-hp engine comes to life in these two Sport modes, and is more reactive to every pedal input. Its 10-speed automatic transmission shifts precisely and quietly in the background, too, but you can paddle shift if you want to do it manually. That massive amount of power is paired with huge ventilated disc brakes, front and rear, that bite heavily, so halting isn’t an issue even on spirited drives.

With this engine size and behavior, the LS registered a fuel economy reading of 8.6 km/L – that’s after 429 km of driving including being on heavy EDSA traffic, few high-speed expressway trips, and a little road fun with the car’s sport modes. Admittedly though, maneuvering the LS 500 is a bit tough because of its size. After all, it’s almost as long and wide as a pickup truck, with a staggering 3,125mm (10.25 feet) wheelbase. Good thing, it has toys inside to help you with that. Aside from the standard blind spot monitors, the full-size sedan is armed with several cameras and proximity sensors. Better yet, its huge LCD display on the dashboard automatically shows the view ahead when you slow down, and it has an around-view monitor for a live overhead shot of the vehicle. With these extra sets of ears and eyes, crawling along tight streets isn’t problematic, but still challenging. Sans the car’s size, handling the LS 500 is easy with its dynamic steering feel, so maneuvering through tight spaces isn’t a workout, while high-speed drives are composed and stable. It also has adaptive variable suspension (also found on most Lexii like the RX 350) that conforms to what the drive demands, so body roll is non-existent, if not minimal.

You might argue that going over unforgiving road surfaces can be crucial for a car with such low profile. It’s true, but the LS 500 has air suspension that can increase or decrease its ground clearance by 10mm. Yes, that’s relatively not much, but that can be the difference between safely going over a huge hump (hello, BGC) and scratching the underbody. With sophistication, finesse, and spirited driving in mind, the Lexus LS 500 may very well be the sexiest luxury sedan out there, while having a price point that’s less than what its European counterparts offer.

The LS 500 isn’t just a vehicle; it’s a work of art, a masterpiece on four wheels, one that Lexus will surely have a hard time topping off on its future sixth-generation model. Well, the designers can start with the infotainment’s touchpad.