The Volkswagen Beetle holds a very special place in motoring hearts around the world. 70 years is a very long time, and the adorable Volkswagen Bug will always have stardom status, immortalized in every facet of pop culture. So it is unfortunate, at least for now, to see Volkswagen finally closing the curtains on their most memorable vehicle, and arguably the most recognizable car of the 21st century. 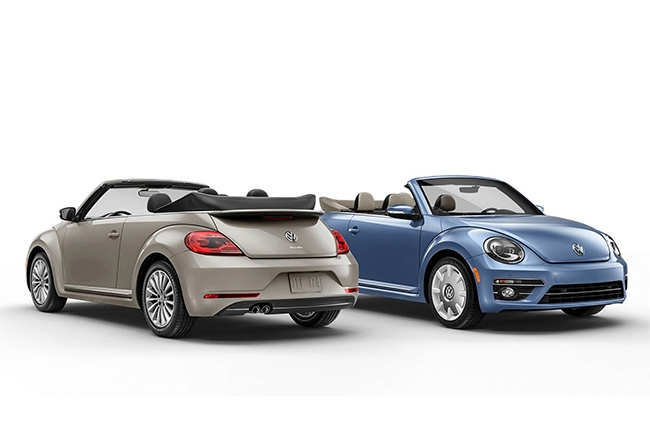 Dubbed the 2019 Volkswagen Beetle Final Edition, July of 2019 will be the last month of production for the second generation modern Beetle, and no replacement is in sight according to Volkswagen. The 2019 Volkswagen Beetle Final Edition will be available in both hatchback and convertible body styles, and in the trims SE and SEL. Aside from the usual white, black, and grey, there will be two special colors, Safari Uni, a shade of beige, and Stonewashed Blue, echoing the special paint that was also available in the 2003 Final Edition classic Beetles sold in Mexico. The 2019 Volkswagen Beetle Final Edition will still carry a turbocharged 2.0L gasoline engine producing 174 hp and 249 Nm of torque, and is mated to a single six-speed automatic transmission choice.

Final Edition Beetles will also come with chrome body pieces, body color side mirrors, Bi-Xenon headlights, LED daytime running lights and taillights, and fog lights. The rear “Beetle” badge is present instead of a “Turbo” one, and a set of 17-inch or 18-inch wheels with unique designs will be standard on the SE and SEL respectively. The best part is that the rubber around those wheels will be whitewall. The interior also gets some special treatment, as all variants get push button start, leather steering wheels, stainless steel pedals, automatic climate control, and a choice of cloth and leatherette seats for the SE trim, and full leather for the SEL. Fender premium audio and a spruced up infotainment system can be found in the SEL variant.

While it is sad to see the Beetle on its last year, it’s last hurrah is a good looking one. My family used to own a blue Beetle from the 80s, and I remember sitting in the backseat, looking through those double windows in the rear. While I may never own one as of this writing, we’re sincerely hoping that Volkswagen Philippines allocates a few of these special editions, so that some of us can have one last chance to treasure Herbie.