Volkswagen Philippines has reached its 6th anniversary in the country, and to celebrate, the German marque is letting loose two variants for the fans of its vehicles. Enter the Volkswagen Lavida Club Edition and Club Edition+, two special edition compacts with a slew of upgrades that could win over a few VW enthusiasts, or even a few non-enthusiasts. VW PH has made a point to extend the look of the Lavida with subtle, yet impressive additions to the compact with a turbocharger. The Lavida is a good base to start with since Volkswagen has opted to equip this model with a 1.4L Turbocharged Stratified Injection (TSI) engine that produces 128 hp and 225 Nm of torque. It’s mated to a seven-speed Direct Shift Gearbox (DSG) that interfaces with the front wheels. Other features include automatic climate control, cruise control, push start/stop, leather seats, and a sunroof. Speaking of wheels, VW PH has opted to outfit this sedan with a special set of wheels. The 10-spoke split-type alloys are painted in a gunmetal gray color and size up at 18 inches in diameter. These wheels are also wider than the 16-inch set on the standard Lavida. 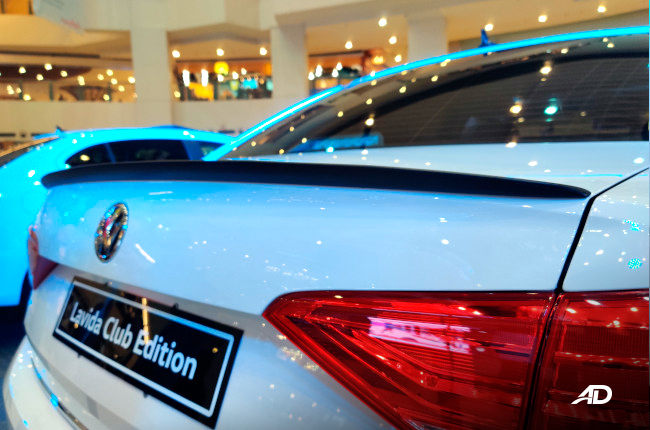 Subtler changes can be found all over the bodywork of the vehicle. You have a lip kit and side skirts that come with the car. Also on the trunk is a small lip spoiler that adds a little contrast and visual interest to the rear. Right above the side skirts, a “club” decal in black is installed and part of the package, rounding out the look. The interior houses the differences that the Club Edition+ has over the standard. In the center of the dash sits the Blaupunkt infotainment system that comes as a dealer option on other Volkswagen sedans like the Santana. This system is augmented by the inclusion of a Kicker speaker set. These inclusions aren’t without their corresponding price increase over the standard Lavida’s price of P1,171,000, which is also discounted by P85,000 at the time of the Club Editions’ launch. Opting for the Club Edition package will set you back an extra P129,000, which brings the total price to P1,300,000. For the Club Edition+ that contains the upgraded head unit and speakers, the price will total to P1,350,000.