Volkswagen of America Inc. is making a huge statement by introducing a pink version of the Beetle with a hashtag on its official name. Called the #PinkBeetle, it’s a Beetle covered with its own unique shade of "Fresh Fuchsia Metallic" paint that would put Pink Panther to shame.

The #PinkBeetle’s exterior will have gloss black mirror caps and running boards to give it a little bit of contrast. It will also be available in coupe and convertible variants.

For its wheels, 17-inch multi-spoke Linas aluminium will be available for the coupe while the convertible will have an 18-inch 5-spoke twister design. Bi-Xenon headlights with LED Daytime Running Lights, LED taillamps, and LED rear license plate lighting come standard for both variants. 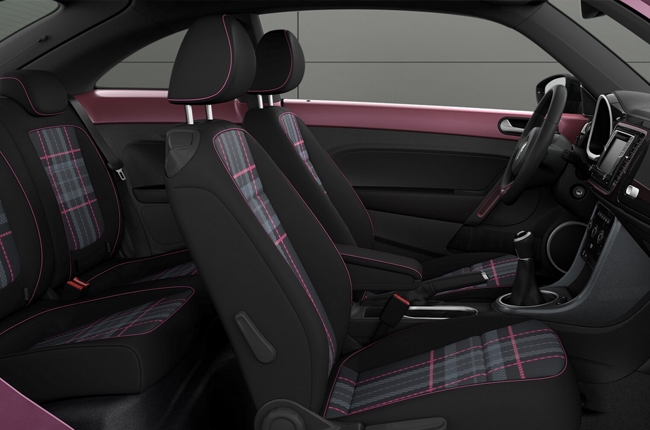 Inside, black dashboard with pink accents and a leather-wrapped multifunction steering wheel can be seen. The German brand placed a 6.3-inch touchscreen with the MID II infotainment system which can be controlled by hand gestures. It also has VW's Car-Net App-Connect suite which allows all 3 major smartphone platforms - Apply CarPlay, Android Auto, and MirrorLink - to connect.

For its powerplant, it will come standard with a 170 hp 1.8L turbocharged direct-injection TSI engine. The #PinkBeetle’s engine will then be mated to a 6-speed automatic transmission. Although, Volkswagen Philippines has yet to announce if they would bring the #PinkBeetle over. This sassy car would most likely appeal to independent career-women who would love to make a statement on the road.