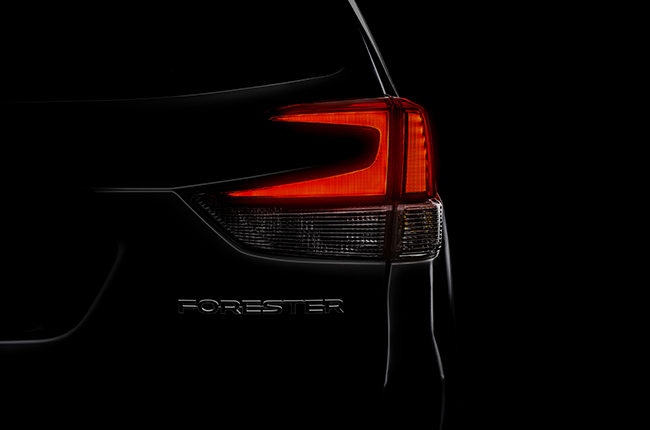 There's a lot of exciting cars to watch out for at the 2018 New York International Auto Show. Teasers are starting to circulate around the world wide web, one happened to be the 2019 Subaru Forester.

Though the photo is 90% darkness, you can clearly observe the badge and taillight – which obviously shows fine remodeling. The headlamp is now wider compared from the conservative ones on the locally-available Forester. We do hope, though, that the vehicle is as charismatic as the new taillamps in its entire form.

Last year, Subaru introduced us to the largest vehicle in its lineup yet – the Ascent SUV concept. The 7-seater SUV's design is that of the VIZIV concept, especially the headlamps which kind of made it look like an electric sporty vehicle. The Japanese automaker now comes back with something that's not a concept but an actual production-model of the existing Forester nameplate.

So, what excites us, you ask? Looking at the VIZIV and Ascent makes us want to envision that the 2019 Forester had adopted the same exterior styling. After all, the taillamps of the VIZIV looks close to the one in the teaser photo. Is it safe to say that this Forester would look like a smaller Ascent? We guess we have to wait and find out.

While you wait before the official photo of the 2019 Forester, why not check out other cars that will debut at the 2018 New York International Auto Show? Toyota is set to unveil the fifth-generation RAV4, while Nissan confirmed that last year's Vmotion concept is the next-gen Altima.