In AutoDeal’s Which Variant articles, we can’t stress enough why choosing the right variant is a deal breaker. The range-toppers aren’t always the best deal regardless of their additional features. That’s the case with the 2019 Ford EcoSport – as we feel the mid-level variant of the subcompact crossover gives you the bang for your buck, while staying on top of its class.

Here’s a closer look at technology and safety features included in the EcoSport 1.5 Trend trim. As a lower variant, the Ford Ecosport 1.5 Trend isn’t really fully-loaded but that’s okay, especially when you consider its P1,030,000 price tag. The range-topping EcoBoost gets all the bells and whistles, but that, of course, would ask more fro your hard-earned money. You could say that the features of the Trend are a compromise, but they’re the ones that wouldn’t be hard to accept. You still get a nicely put cabin with quality materials to support the toys included. What you won’t like: dated multi-functional display in between the gauge clusters, no cruise control at this price point

But of course, there are things in the EcoSport 1.5 Trend that could put some people on the edge. The digital display in between the dials looks dated and is definitely a carry-over from the pre-facelift model, which isn't a good thing really.

Another qualm would be the lack of cruise control. At a price tag above a million pesos, the lack of this convenient feature is quite surprising. By far, the Ford EcoSport stands as the class leader when it comes to safety features that come with the car. What’s great about is that even in the mid-level Trend trim, the EcoSport 1.5 gets the same as what the range-topper has, minus the side curtain airbag. If you’re for safety, the EcoSport delivers with flying color. 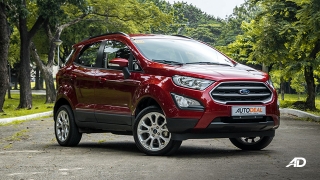