Filipinos love sulit packs – you know, those things at the grocery stores screaming with how much you’ll save when you buy them. We tend to go for these things because let’s face it, if you can get more than what you paid for, why settle for something else?

Enter, the 2019 Subaru Forester. It gets a next-generation model change this year in the Philippines, losing its turbo while providing more features with its attractive price tag. It’s the sulit pack of crossovers, for me at least, and here’s our review of the Forester 2.0i-L to back up that claim. 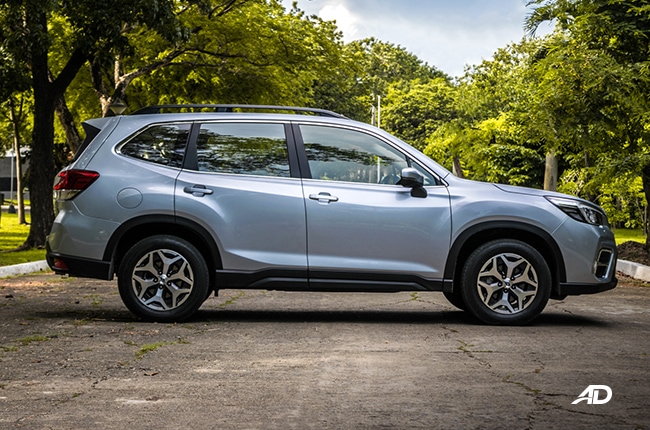 If you’re familiar with Forester’s design, I’m sure you’ll agree that the fifth-generation model follows what its predecessors carry in terms of overall styling. The familiar signature hawkeye LED headlamps with sharp DRLs and trapezoidal grille top the design arsenal, while the snarky LED taillights, revamped fog lamp casings, and restyled 17-inch alloys will let you know that this is an all-new model you’re looking at.

The design changes from before might look minimal, but the Forester did get bigger to further improve its presence on the road. It works well in my book, and that’s coming from someone who wasn’t a huge fan of its styling. For the record, this generation is the best-looking Forester yet. Of course, the increase in body size translates into a roomier cabin that’s complemented by high-quality materials. The leather-wrapped parts look and feel nice, with contrasting stitches that accentuate the cabin.

In the driver’s seat, all controls are within arm’s reach, plus the integration of three LCD displays isn’t alienating. One of the major qualms, though, would be the pervasive use of scratchy piano black plastics. Beyond those, everything’s laid out nicely – except for the misplaced EyeSight buttons near the dome light – plus the sliding elbow rest is a great thing to have especially on long drives. Rear space is cavernous, even for those standing beyond 5’6”. Three people would fit snugly with the non-obstructive center tunnel, so long as they have an average build. For two people, it’s a party, quite literally if you consider the two cupholders that could hold bottles of beer instead. The cargo area size isn’t listed, but evidently, it’s huge enough for standard-sized child stroller and a month worth of groceries, plus enough room for shopping. Even better, space can be maximized by folding the second row flatly.

The previous-generation Forester is known for its ride comfort, but the all-new model inches it out with even more pliant suspension setup. NVH insulation’s improved as well, with only a bit of road noise even at highway legal speed limit. The 2019 Forester’s claim to sulit pack is mainly showcased with its set of tech conveniences. The front seats can be adjusted in eight ways electronically, while the driver’s seat is gifted with memory seating. The headlights are automatic with levelizer, as well as the rain wipers, climate control, and tailgate. Even the side mirrors are power-folding while the front windows have auto up and down function.

At the back, there are two USB ports that charge smartphones quickly, plus the rear seats can be stumbled through a button found at the trunk. Of note, the only things that are found in the range-topper but present in this mid-variant are the panoramic sunroof and the auto rear-view mirror dimmer – superfluous things, if you ask me.

The only thing left out in the Forester is its 8-inch touchscreen infotainment system. Don’t get me wrong, it looks nice and works okay for the most part, but the non-inclusion of Apple Carplay and Android Auto is a bit surprising this day and age. Nevertheless, the 6-speaker setup produces sound that's enough to cater to most music genres. Two words: EyeSight Technology. For a mid-variant, the Forester 2.0i-L comes with EyeSight which basically is a radar-based system that employs adaptive cruise control, collision mitigation, and lane-keep assists. That’s a pretty nice deal in terms of convenience and safety.

Apart from the EyeSight tech, this Forester also comes with a full set of airbags, ABS with EBD, brake assist system, brake override system, ISOFIX child seat tethers, and an all-wheel-drive system that improves traction, especially during the rainy days. It also has five 3-point seatbelts with an audible seatbelt reminder for the front occupants. Okay, for the most intriguing part. The non-turbo 2.0-liter direct-injected FB20 isn’t the most powerful mill out there. Again, that’s because of the missing force-inducted air – but that doesn’t mean the engine’s lacking. The 156 horsepower and 196 Nm of torque are enough to pull the car up to speeds, even from a standstill, while Subaru’s Lineartronic CVT doesn’t feel like one, especially when driven in traffic.

At speeds, though, is where you’ll miss the early torque delivery from a turbo. You’ll also feel the disadvantage of a CVT wherein you’ll have to plant your foot deeper onto the pedal in order to feel the pull. In this regard, the Forester matured to become a proper family car rather than an exciting grocery-getter – and that isn’t a bad thing.

Handling-wise, the 2019 Forester behaved nicely on high-speed runs on the expressway. The EyeSight technology was also better this time as you can change how the car will accelerate when the road ahead is clear. In the city, even with the increased size, the Forester wasn’t hard to maneuver because of the generous driving visibility. Body roll on zigzags was barely minimal as long as you’ll go through them with care.

For light to medium off-roads, the Forester 2.0i-L has X-Mode that controls the engine output to accommodate demanding terrains. You can read about my X-Mode experience on the Forester's First Drive article. The loss of turbo wasn’t a bad thing for the 2019 Forester’s fuel efficiency. On the highway with the cruise control set at 90 km/h, I was able to get 20.4 km/L. Sunday drive in the city returned great numbers, too, clocking in at 12.8 km/L at an average speed of 60 km/h. With all the features and driving characteristics mentioned, you might think that the Forester would come in close to 2-million pesos – but it isn’t. At P1,698,000, the Forester 2.0i-L stands as the most affordable, tech-laden AWD compact crossover you can buy today. That fact allows it to undercut its rivals that offer either fewer tech toys or heavier price tag, or both. It is indeed the sulit pack of crossovers, something that should be included in your shortlist of family cars. I reckon, dropping the turbocharger for this year was a good thing if it meant for the better.