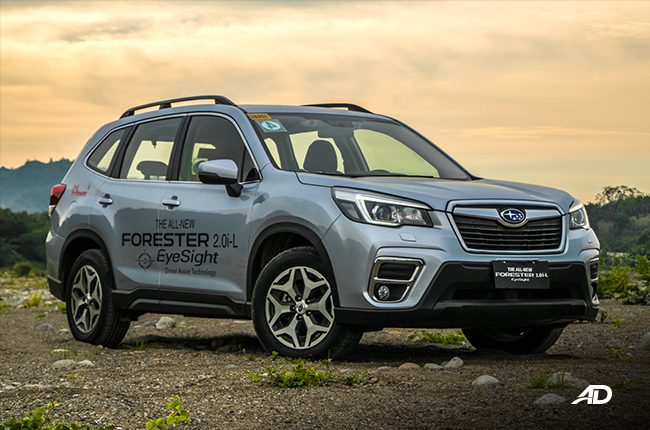 Take your best-selling model, rebuild it using your newest platform, increase its size a bit, and add a magical feature that makes driving a whole lot easier – that’s the 2019 Subaru Forester for you. And oh, price it competitively against its rivals, like seriously competitive, while offering at par, if not better, features. What’s not to love?

The introduction of the all-new Forester jump-starts an aging yet formidable name while sparking a bit controversy by dropping the ever-coveted turbocharged mill. Add the fact that the styling almost didn’t change, save for the new snarky taillights which I love, by the way. Now, on the surface, the fifth-generation Forester seems like a ludicrous deal that would force buyers to rethink what they know about compact crossovers. But does the story continue with the actual car and its driving dynamics? Here’s my first drive review of the fifth-generation Forester after a quick trip up north with Subaru Philippines and a handful of media personnel. Subaru’s famed boxer engine employs four cylinders that pump out 154 horsepower and 196 Newton-meters of torque, numbers seemingly lackluster when compared to the Forester XT that I reviewed before. But on the road, the performance would satisfy both the timid and aggressive driver types, and everything in between.

Leaving the flag-off area at the peak of morning rush hours, the Forester immediately faced the bleakest driving conditions inside the city. The crossover stood its ground and kept its city-friendly nature. Constant on and off the throttle proved to be a nuisance, plus you wouldn’t really discern when you take off from its brake hold function. The suspension setup leans to the balanced comfy side, stern on paved roads yet forgiving on potholes and crevices. And of course, the ever-so-cool EyeSight feature is usable amidst heavy traffic. Such traits make the Forester pretty comfortable to drive.

Out in the open Urdaneta, Pangasinan was a two-hour, 174-km drive from Balintawak toll plaza – quite a long journey via three expressways and the perfect way to test several features of the Subaru Forester, including the absence of a turbocharged option.

With four people inside, the Forester was able to pull nicely without hesitation and keeping up with the convoy wasn’t such a daunting task. It’s also composed and steady upon reaching legal speed limits.

At the end of the highway, fuel economy registered 8.1 km/L. Four passengers, light luggage, and some moments of spritely acceleration – not too shabby, really. There were moments when you wish that a kick from a turbocharger would come in, such as when overtaking, but that isn’t the Forester now. It has grown to become a mature crossover SUV, one that provides comfort and ample space for a family of five.

Speaking of space, there’s plenty of head-, leg-, and head-room for four occupants to feel cozy in a long drive. An additional passenger in the middle of the second row was very much welcome in place of the foldable armrest with cupholders. There were plenty of cubbyholes to put your stuff in while charging gadgets could be done via two 2.1A USB ports below the rear air vents. Front occupants could do so through the USB port by the center console.

EyeSight – A gift to mankind I’ve said this before but I will say it again: the EyeSight is your best bud in driving, whether in the city or out in open roads. Subaru’s version of adaptive cruise control takes a lot out of your driving duties. Just set your desired speed and go; let the car do the braking and accelerating for you. Even better, you could do so in EDSA, too.

In the Forester, the EyeSight has improved from what I tested before. It didn’t rush when accelerating while braking felt safe even when follow distance was at the nearest setting. The refinement made the vehicle more comfortable for both the driver and passengers. The only thing I worried about was fighting the urge to let go of the steering wheel. The Forester isn’t built on a ladder frame, so it’s still a crossover but it’s now built on top of the all-new Subaru Global Platform. A simple name for something that works wonders is an irony I’m willing to take any time.

For one, the new platform allows a relatively low driving position, which in turn lowers the car’s center of gravity. I felt its effect on twisties where body roll was pretty negligible even at speeds. It almost felt like I was driving a sedan. NVH insulation’s thicker, too, so outside noise was pretty minimal. Next, the 2019 Forester felt sturdier than before. We were able to put that to test on a little side trip towards La Union – a light to medium off-roading course that saw the convoy crossing two shallow rivers. The Fozie felt rigid on its plight over rocks and trenches, while puddles and shin-deep waters were a cinch, thanks largely to the X-Mode. It was a fun drive over what would have been a treacherous terrain for crossovers. For that, it won’t be a far cry to call the Forester a crossover SUV. 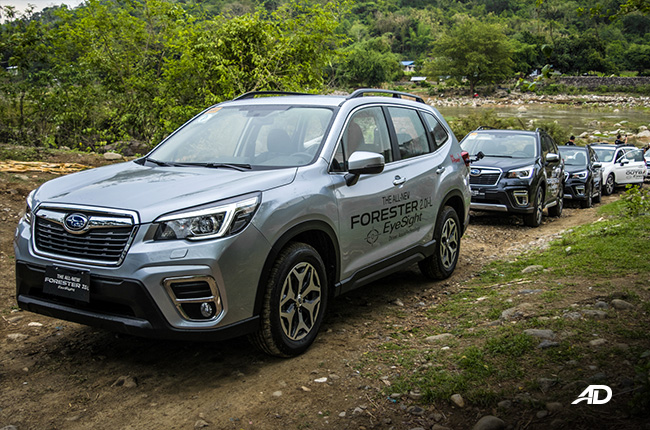 With all the things mentioned here considered, P1,698,000 for the Forester 2.0i-L EyeSight mid-variant is quite a great value for a family vehicle that could double as a trekking buddy. The car may have grown for a more mature purpose without the turbocharged option, but it did so by ticking all the right boxes. I'll get more insight about the car in a more in-depth review soon so keep your eyes peeled for that.

Quite frankly, the 2019 Forester should now position to cater to the needs of mainstream car buyers, even without adding a third row. It’s sulit, so to speak, which is something that I wouldn’t normally use to describe a Subaru. But then again, it is what it is, and people should really start relating price tags with the things they get with the car.