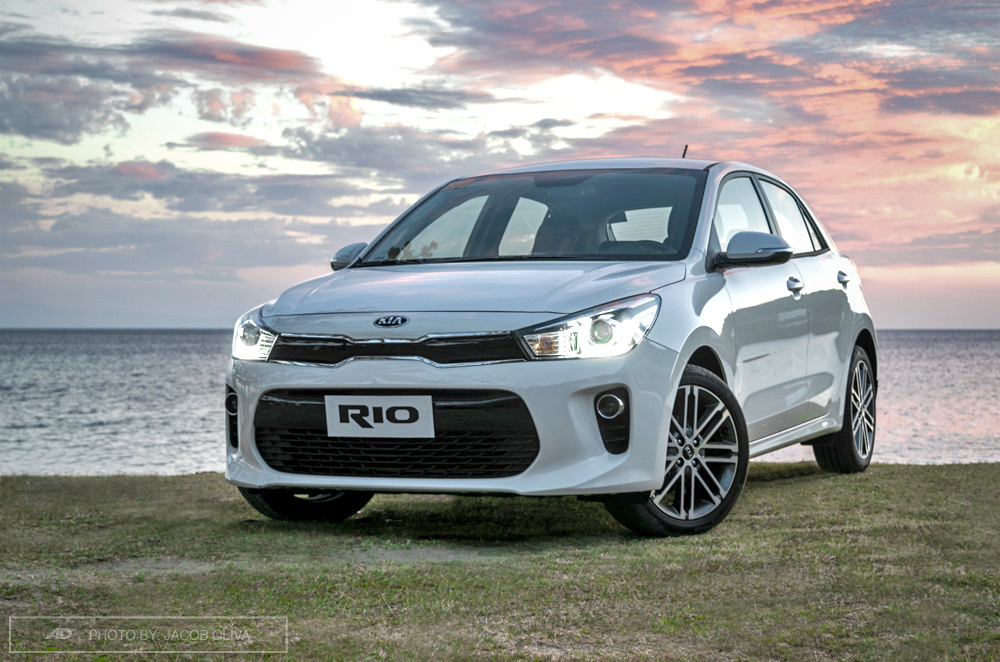 Subcompact cars are the go-to segment of those shopping for vehicles within a million pesos, but want more space than mini hatchbacks. They are the middle ground, so to speak — not too pricey but not too small in size. Their generous cabin wiggle room (for average-sized Filipinos), fuel-efficient nature, and decent design make them the perfect choice for city-dwellers who sometimes go out of the urban jungle on weekends or holidays.

The all-new Kia Rio, which was launched in mid-2017, is part of that fairly huge market. Though it isn’t one of the best-sellers, it has a lot of things up its sleeve that car buyers aren’t really aware of, even after almost a year of being in the showrooms. Our time with its range-topping GL AT variant proved its worth, along with some of the things that it can improve on.

Performance
Engine Output (HP), Acceleration, Transmission, Handling 3.0/5
Design
Exterior & Interior Design, Quality, Fit and Finish, Ergonomics 4.0/5
Ride Comfort
Cabin Comfort, Suspension, NVH Insulation 4.5/5
Safety and Technology
Convenience Technologies, Active and Passive Safety Features 4.0/5
Value for Money
Amount of the vehicle you get for the price, Fuel Efficiency 4.0/5
What You Will Like
What You Won't Like
How We Do Our Reviews If not for its generic lower grille, the Rio hatchback’s design can be at the top of its league like the Jazz or Mazda 2. It has sharp headlamps adorned with LED daytime running lights, a solid tiger-nose grille, and a few creases on the hood for that striking look. Its projector headlamps steer with the car, too, which proved to be very useful at night when turning into a dark intersection.

At its sides, the subtle lines adds character to the car, along with its uniquely-designed 17-inch rims. The not-so-steep sloping also works well with the car’s interior space (more on that later). 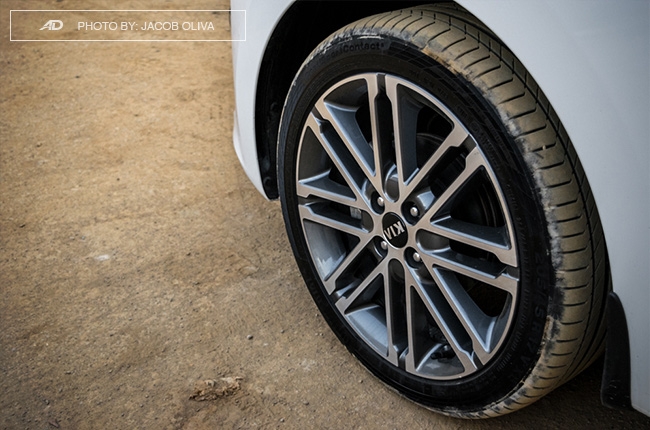 The rear end of the car is its another jewel, primarily because of its LED taillights that look like tiger claws. They really look good at night, and I personally dig those. Kudos to Kia for this!

The Rio’s overall design makes it more than just a normie, and is a reminiscent of its smaller brother, the Picanto. Although, the latter is much more gwapo than this subcompact hatchback. However, just like the mini hatchback, we just wish that the Rio drives as fast as it looks. With the carry-over 1.4L Kappa gasoline engine under its hood from its predecessor, the Kia Rio gets 100 hp and 133 Nm of torque. Admittedly, these figures are at the bottom when compared to its mentioned competitors, and its four-speed automatic transmission aren’t really helping those numbers at all. Don’t get me wrong; the car can pull itself nicely on flat roads. It’s just that the engine smoothly feeds power to the car, taking abrupt and aggressive acceleration out of the picture. And, even with the dated transmission type, it has a manual mode that you can use for overtaking or tackling uphill climbs.

Surprisingly, the Rio registered not-so-impressive fuel economy figures with that engine behavior. It clocked in 18.8 km/l on the highway at an average speed of 18.8 km/h, while crawling city drives registered 6.9 km/l at 15 km/h average. Faster paces at 60 km/h read 12.1 km/l. Thankfully, the car’s handling, interior amenities, and ride comfort make up for what the Rio lacks in performance. Its steering feel is dynamic, and knows when you need it light or heavy, which makes both city drives and highway runs convenient for the driver. The steering wheel is also tilt-adjustable and telescopic, so drivers can easily find their sweet spot behind the steering wheel. Its braking power can be improved, though. You can blame that on the disc (front) and drum (rear) setup of the car. To say that the Rio’s cabin looks good is an understatement. In fact, it’s beyond what its competitors can offer, in aesthetics and available features. At its price, you get a leatherette-covered central compartment, steering wheel, and gear shifter. It also comes with fabric-clad seats with intricate designs and contrasting stitches, soft plastics that don’t feel and look cheap, and automated stuff like headlamps, wipers, door locks, heated side mirrors, keyless entry, cruise control, and defogger.

You’ll also appreciate some of its little things like the sun visors with lit vanity mirrors for both driver and front passsenger, as well as the presence of two cup holders and four bottle holders in the entire cabin. Although, one might argue that its head unit isn’t touchscreen nor a LCD display. For me, that’s fine since its floating stereo system pairs up nicely with smartphones via Bluetooth or USB, and the speakers are more-than-decent sounding. You can even take hands-free calls through it. It can also be controlled via the steering wheel, together with the cruise control and other vehicle settings.

There’s also a power outlet at the dashboard and behind the central compartment to charge your gadgets. Even without rear vents, the air conditioning works fine even during hot days. Another thing you’ll like about the Rio hatchback is its ride comfort, whether you’re in the front or as a passenger at the back. The suspensions are heaven-sent — able to absorb reasonable road imperfections while keeping the passengers in place with barely present body roll. Engine noise isolation is good, but Kia can improve its wind and road noise deadening a bit.

A huge chunk of the Rio’s stellar ride comfort is its vast space. For people that stand at 5’8” and below, leg-, elbow-, and head-room should be sufficient. Trunk space is also immense, and can be maximized by folding the rear seats flat and removing the trunk lid. Quite frankly, the 2017 Rio Hatchback 1.4 GL AT is one of those underrated models in the market of subcompact vehicles. With this car, you’ll pretty much get more than what you’ll pay for, which makes its P975,000 (post-TRAIN) price tag a reasonable figure to look at.

Yes, its competitors may have the edge when it comes to engine performance, but Kia’s contender excels in other things — things you’ll actually appreciate when you spend more time with the car. This makes the Rio a solid daily companion and worthy to be considered if you’re looking to buy a subcompact vehicle. 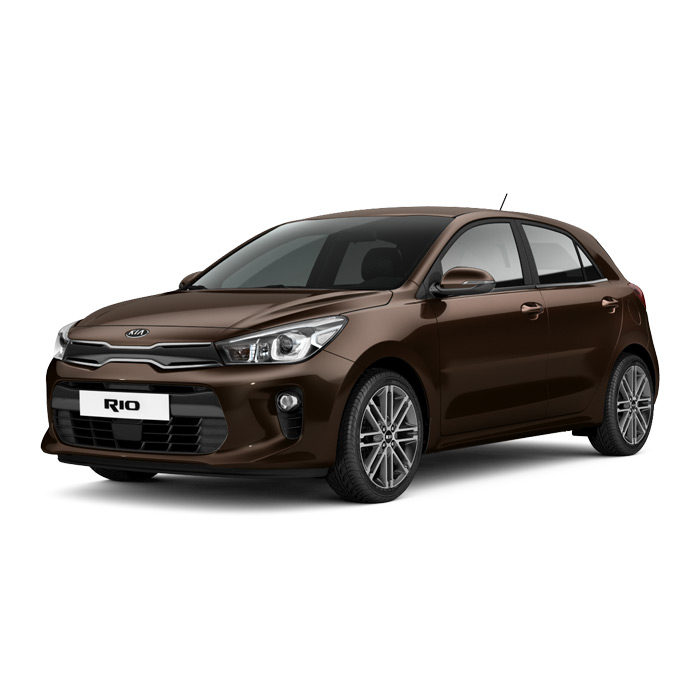 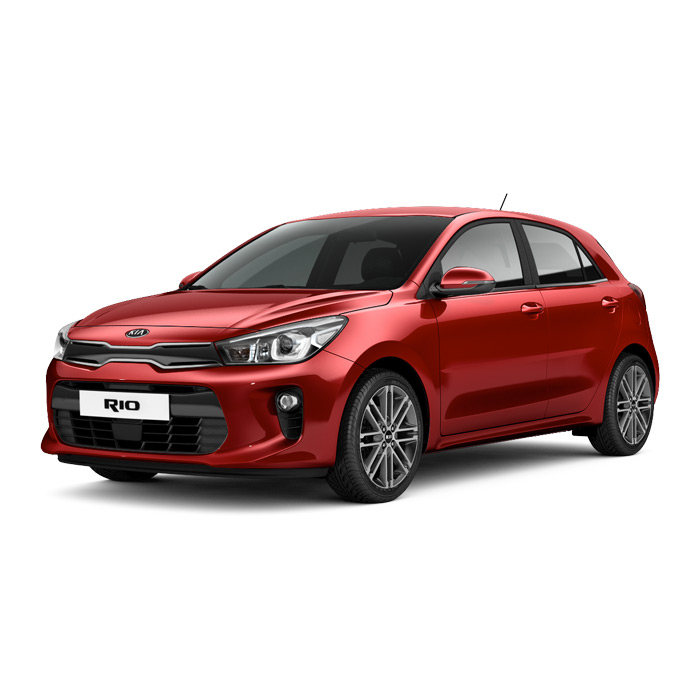 You can request quotations simultaneously from multiple Kia dealerships. Select your preferred dealers from the list below.