The “Impreza WRX” were two words that reigned the World Rally Championships (WRC) for quite some time. They were inseparable and a force to be reckoned with, conquering the motorsport by storm. However, the two parted ways in its fourth generation model, leaving the names just “Impreza” and “WRX."

This move by Subaru was actually smart, as it allowed the brand to peg the Impreza for the family compact car market, while keeping its focus on high-performance tradition for the WRX. Now, this ultimately lowered the overall cost to make the former, but does this make the Impreza a boring family car?

Our time with the 2018 Subaru Impreza 2.0i-S CVT proved otherwise.

Performance
Engine Output (HP), Acceleration, Transmission, Handling 4.0/5
Design
Exterior & Interior Design, Quality, Fit and Finish, Ergonomics 4.0/5
Ride Comfort
Cabin Comfort, Suspension, NVH Insulation 4.0/5
Safety and Technology
Convenience Technologies, Active and Passive Safety Features 4.5/5
Value for Money
Amount of the vehicle you get for the price, Fuel Efficiency 4.5/5
What You Will Like
What You Won't Like
How We Do Our Reviews 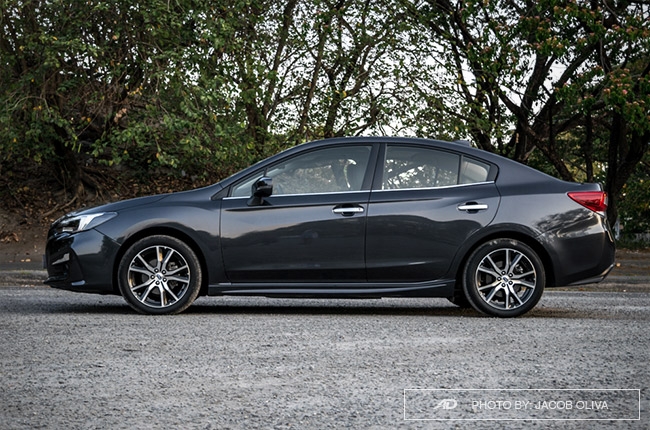 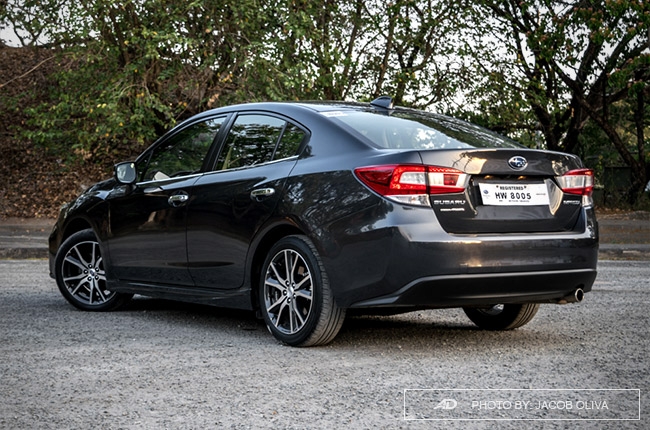 The fifth generation Impreza is the first Subaru in the Philippines to sit on the brand’s all-new Global Platform. Together with the XV crossover, it promises sturdier architecture, straight line stability, increased safety, and better comfort.

Even with these size increments from its previous generation, the Impreza remains to be the smallest among its compact sedan rivals like the Mazda3 and Honda Civic. 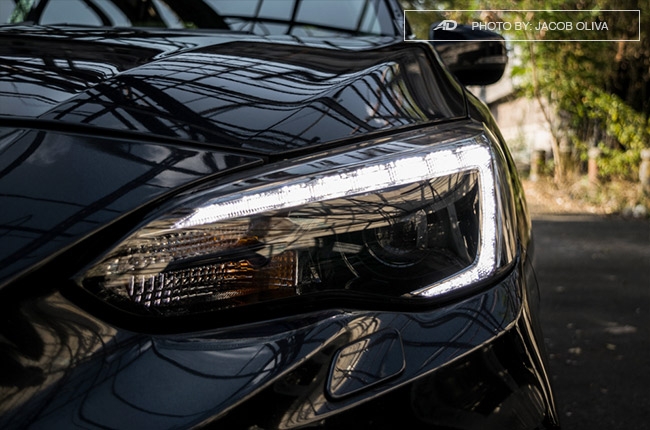 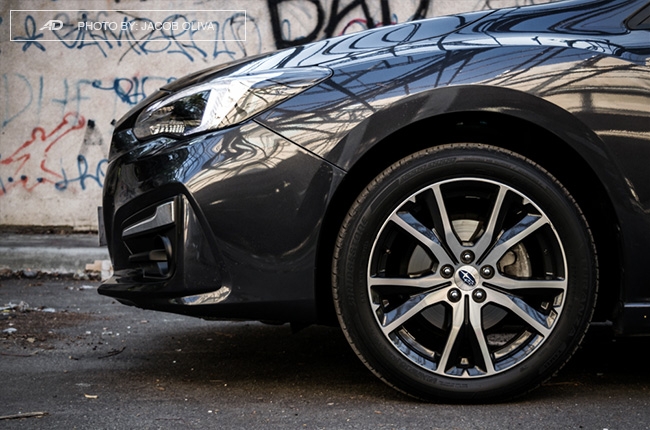 Nevertheless, the Impreza isn’t short in aesthetic appeal when put side-by-side with the competition. It has sleek lines on its sides and subtle hood creases that serve as highlights to its rather composed overall demeanor. And, oh, you got to love that shark’s fin antenna.

What stand out in the Impreza are its sharp LED daytime running lights embedded in its automatic signature LED hawkeye headlamps. Such feature is the exclamation point to this car’s design, a solid emphasis that this model isn’t just a regular family sedan. And, as a not-so-fan of chromes, the minor chrome finishings deserve a warm welcome.

The balance between the conservative design and emphatic accents on the Impreza is like sporting a Rolex while wearing a traditional suit — it’s not too flashy at first but once you rest your eyes on that fancy timepiece, you know that this person is something. Okay, maybe the Rolex analogy is a bit too much, but you get the gist. The mix of sportiness and classiness continues in the cabin. If it looks familiar to you, you’re right, the Impreza’s interior is greatly shared with its crossover counterpart, the XV. The similarities include the three-screen layout, bright-colored eight-inch display head unit, stitched accents, steering wheel buttons placement, power door buttons, aluminum pedals, and the scratchy piano-black encased gear-shifter housing.

While there are minimal complains in this area, I must point out that the Impreza’s cabin color is a bit dull compared to the XV, as it has gray-over-black instead of the latter’s orange embellishments. Good thing the soft touch feel is present in both cabins. 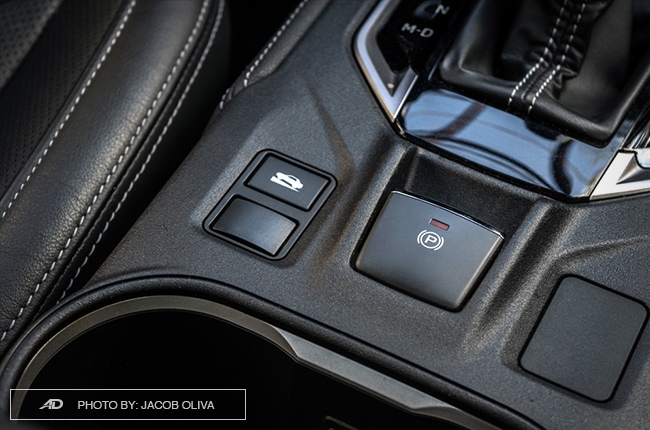 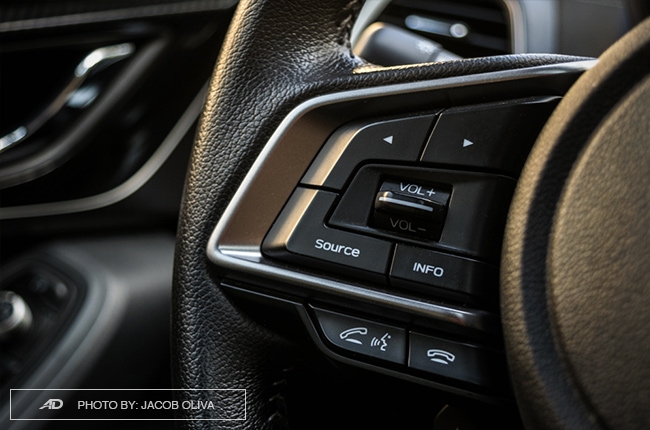 If I may also add, the Impreza’s head unit is a bit laggy. Not sure if it’s just a bug or something, but it sure needs an update. Aside from that (and the kind of sensitive blind spot monitors), there’s nothing else to look for — speakers sound good, buttons are tactile, seats are power-adjustable, rain-sensing wipers works fine, and elbow rests are in the right place. These features made long drives with the family sedan enjoyable and comfortable for the driver. It's just a shame that speed-sensing door locks aren't available.

As for the passengers, space is abundant whether in the front or at the back. We tested and a person standing 5’8” can seat peacefully at the back, provided that he’s sitting beside two average-sized individuals. The one in the center should compromise, though, as that person would not be sitting on semi-bucket seat and would need to deal with the center floor bump. 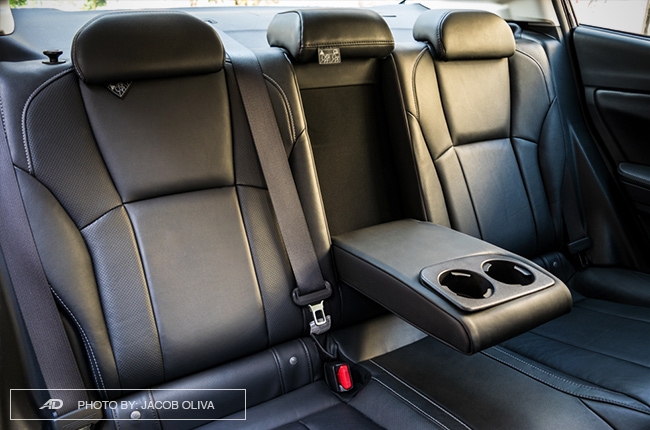 The Impreza’s trunk space is of average sedans’, enough to house five duffel bags, and doubles when the rear backrests are folded flat. What’s commendable about this car is its overall comfort.

Even without the presence of rear air conditioning vents, the car’s climate control is more than enough to keep the whole cabin cool at any time of the day. Road, wind, and engine noise are well-insulated, while its suspension are tuned at just the right dampening — not too soft for stable cornering (minimal body roll) yet not too stiff for it to be painless on considerable road imperfections. 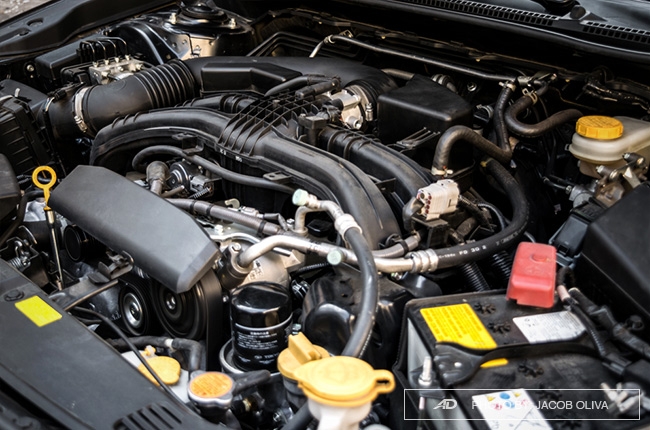 Part of the Impreza’s overall comfort comes from the fact that its 156-hp 2.0L naturally-aspirated boxer engine knows how to smoothly feed power. It doesn’t let your head touch the headrests abruptly, while providing enough pull when needed. Low- and mid-speeds are more on the safe side with this car, but the fun begins when you reach legal speed limits.

Moreover, its continuously variable transmission (CVT) behaves nicely during low- and mid-speeds, with less spooling. At high speeds, on the other hand, this CVT knows where to throw the engine power in its seven simulated gears. With that, you won’t feel short of the needed pull. Also, in case you want to do the gear-shifting manually, you can do so via its precise paddle shifters. 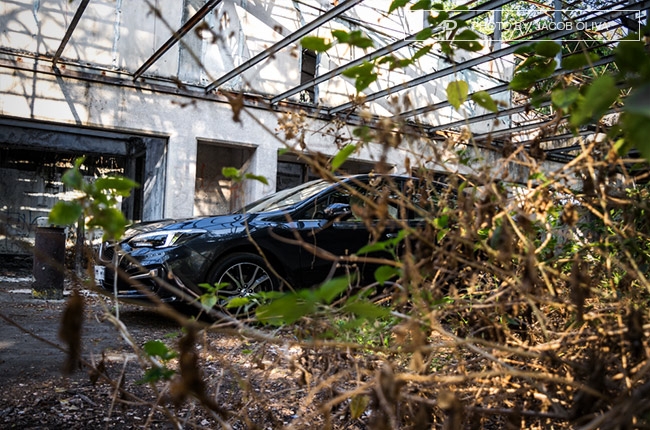 Another fun factor when driving the Impreza is its low seating position. It makes you feel more connected to the ground and in full control of the vehicle. In exact science, low ride height means low center of gravity, which also means better stability and more precise cornering. Now, are these felt with the Impreza? Hell yes.

Speaking of cornering, the Subaru’s symmetrical all-wheel drive system comes into play and it’s a superstar. It keeps the car on the road even when doing quick turns. Moreover, the car’s steering is of enough tightness and won’t give you a workout when doing city maneuvers. I also love the car’s ventilated disc brakes as they bite like a police dog on command, which can make you feel safe even at high speeds. 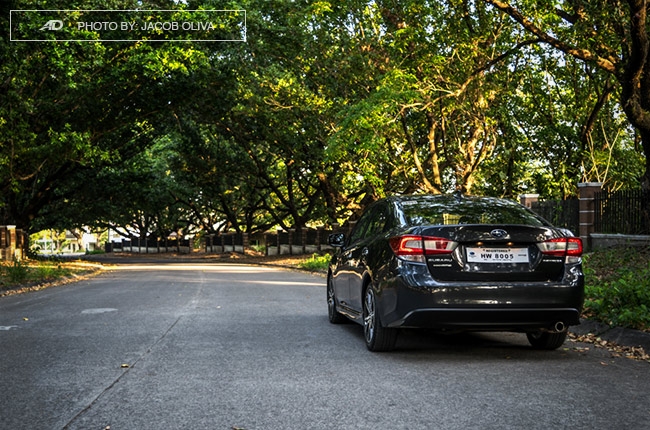 Balanced — if there’s a word that best describes the Impreza, then this is the one. The Impreza and WRX may have parted ways a long time ago, but the latter’s spirit is still faintly felt in the former. And with the mentioned driving characteristics, high-tech features, notable riding comfort, frugal engine, and pretty looks, this family sedan is well-priced at P1,458,000. Since this amount is at the middle when compared to its Japanese rivals, it may very well be its strongest trait.

The worth of your money doesn’t rely solely in the vehicle’s price tag; the things you get with the car should match, if not exceed, the amount you paid for it. With that said, the Impreza is a value-packed family sedan that should be on your list if you’re looking for compact car.