The Ford Everest is the Blue Oval badge’s contender in the midsize SUV segment, and since then the model has been recognized for its strong practicality points and generous specifications making it one of the strongest contenders in its class. Last 2019, the refreshed Everest made its way to the Philippine market, with it having a redone exterior, more standard features, and updated powertrain options. With the current model now approaching its 2-year anniversary in the market since its facelift, is the Ford Everest still a strong contender in its segment? Let’s find out.

Related: First car or next car, the Ford EcoSport is a tough package to beat 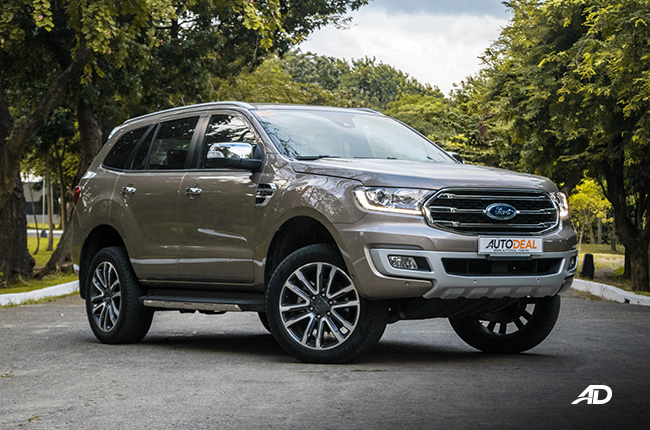 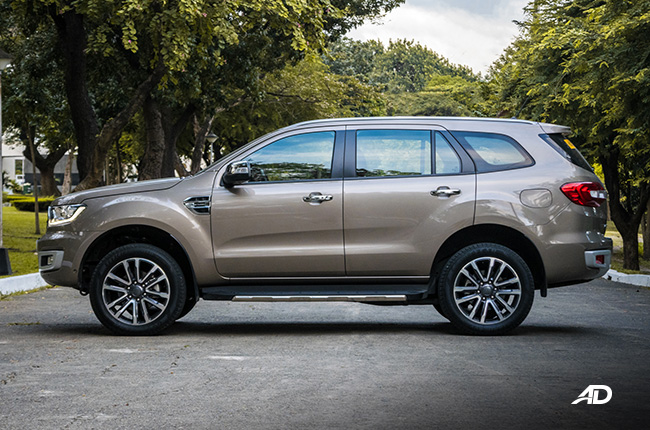 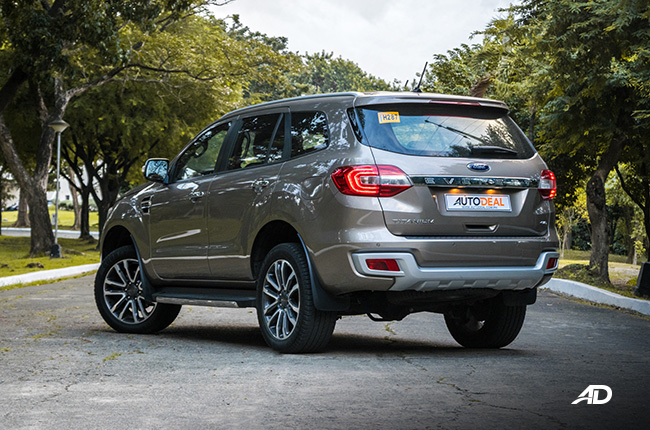 The Ford Everest has one of the biggest dimensions in its segment, with it being the longest and one of the widest in its class. For reference, the midsize SUV is 4,893 mm long, 1,862 mm wide, 1,836 mm tall, and sits 225 mm off the ground. 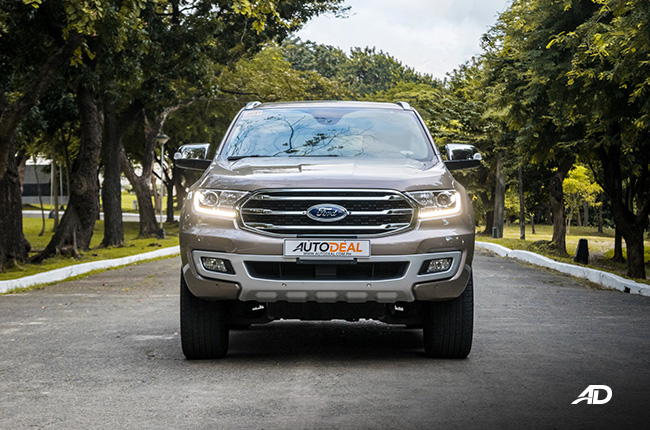 As for looks, the Everest still sports its familiar design that dates back to 2015. Though, there are some minor styling changes done to midsize SUV last 2019 including the revised front bumper, grille, and a new set of 20-inch rims. Ford Philippines also ditched the Ambiente and retained the Trend which still gets the same set of 18-inch alloys and body-color applications on its door handles and side mirrors, then again, it also comes with the revised fascia along with standard LED lights. Notably, Ford Philippines has extended the Everest range last May 2020 with a new Sport trim. The Ford Everest Sport 4x2 AT looks meaner compared to higher trims. Gone are those shiny chrome details and are then replaced with black accents for a sportier look, also, one of the main distinctions of the Sport variant is the different grille design it has and the Everest lettering found on its grille. Overall, the Everest has aged like fine wine, plus, its recent update has made it even more mature and appealing than its predecessor. 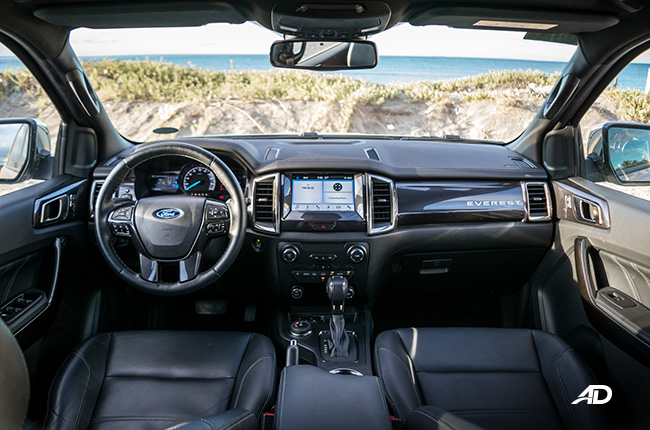 Inside, the Ford Everest has the right amount of tech making it one of the most well-equipped options in its segment. Its cabin was executed with a fair share of durable and quality materials, all variants come standard with leather seats with power adjustability available for both the driver and passenger depending on the trim you get. 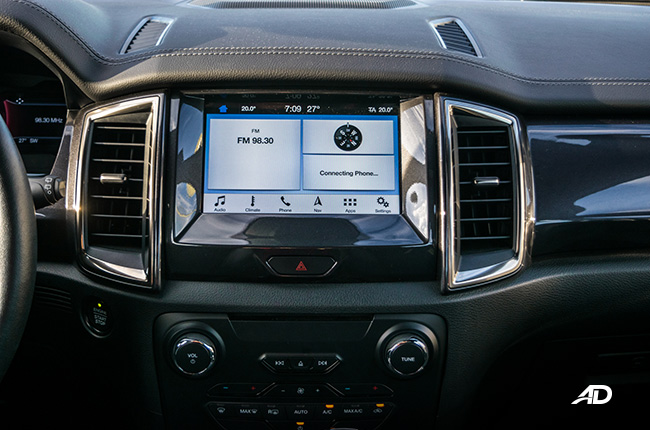 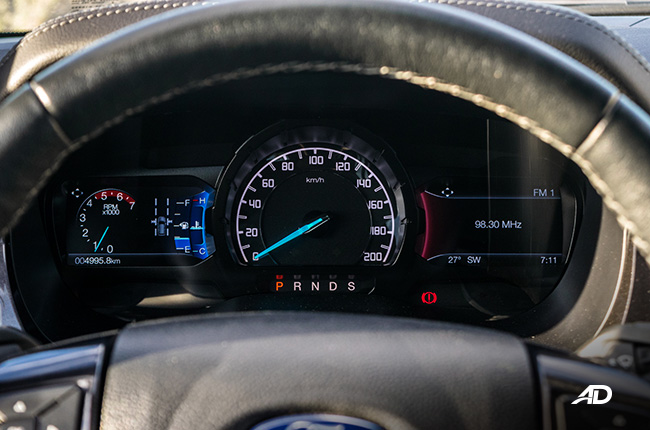 One of the main interior highlights of the Everest is the Standard 8-inch touchscreen that supports Ford’s SYNC3 as well as Apple CarPlay and Android Auto. The Trend and Sport trim comes with 8-speakers while Titanium variants have 10-speakers. Other notable features of the Ford Everest include a dual-zone automatic climate control, steering wheel mounted audio controls, its analog and digital gauge cluster, a push-start button along with a smart keyless entry, and cruise control. A panoramic sunroof is available, however, it’s only an exclusive feature on the range-topping 2.0 Biturbo Titanium+ 4x4 AT variant. 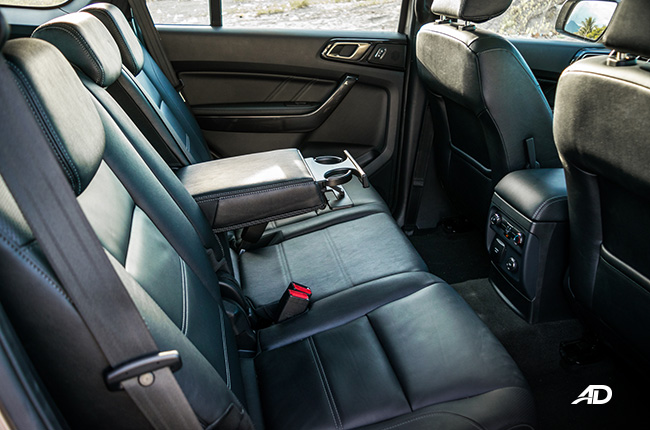 The Everest does not disappoint when it comes to interior space, with plenty of room for full-grown adults, too, although the second row would be more comfy for two and the third row’s better for children and short adults. As for cargo, this midsize SUV has 249-liters with all the seats up, folding the third-row will increase your numbers to 876-liters, and having all the seats down will equate to a glorious 1,796-liters of cargo space. 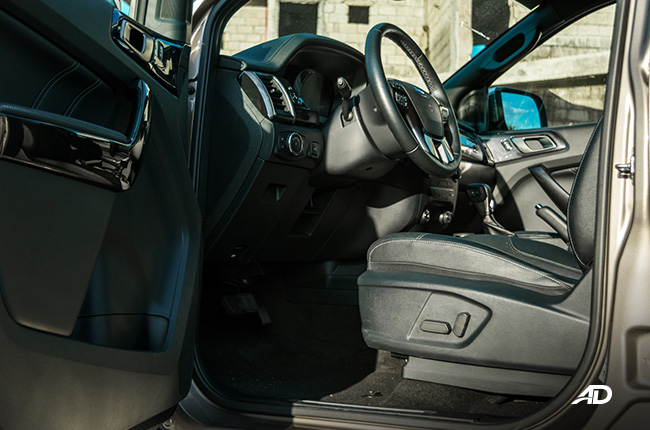 While the Everest might not have the softest ride when compared to the Nissan Terra, but Ford’s contender still happens to be one of the most refined and best riding vehicles in its segment. As for its suspension layout, the front gets a double wishbone with coil spring and anti-roll bar while the rear supports a coil spring with watt’s link and anti-roll bar setup, giving the Ford Everest a pliant yet composed ride. NVH insulation’s superb except for the engine’s sound that creeps into the cabin even with music playing in the background, then again, a little bit of noise wouldn’t hurt you. 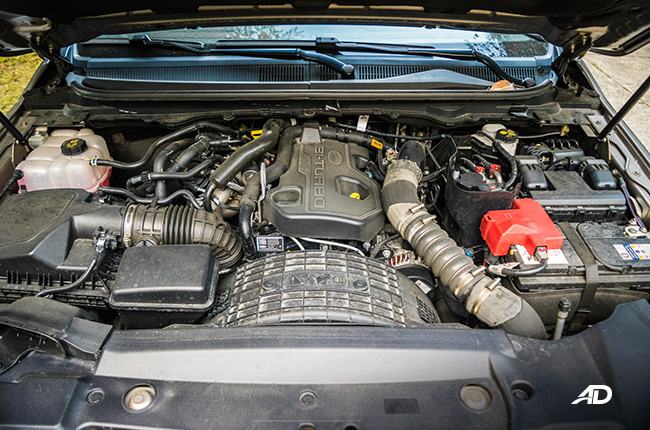 Back in 2015, the pre-updated Ford Everest had two powertrain options, namely the familiar 2.2-liter and 3.2-liter turbo-diesel engines. Fast-forward to 2019 and the refreshed Everest now comes with an updated range of powertrain options. Three engine options currently exist in its lineup which includes the familiar 2.2-liter engine that's available on the entry-level Trend, putting out 158 hp and 385 Nm of torque. Next in line is the 2.0-liter single turbo-diesel which is available on the Sport and mid-tier Titanium, producing a healthy 178 hp and 420 Nm of torque. The Raptorized 2.0-liter Biturbo diesel, on the other hand, is exclusive on the 4x4 variant, churning out a healthier 210 hp and 500 Nm of torque.

Notably, that Biturbo engine is currently the horsepower king of its segment, with it successfully overtaking the 2.8-liter turbo-diesel engine found on the Chevrolet Trailblazer. Both of the new mills can only be paired with a 10-speed automatic transmission while the entry-level engine is then mated to a 6-speed automatic. 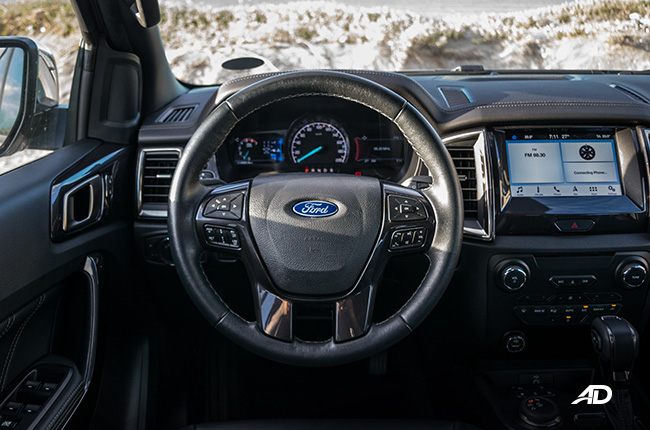 The competition in the midsize SUV segment is pretty tough but the Ford Everest still remains strong and ready to take on other contenders in the market. Notably, even its entry-level variant does not disappoint. Every single trim of the Everest is cleverly packaged with safety and convenience features, which can be yours at a reasonable price range. Not to mention, you also get its ageless macho exterior, powerful yet efficient performance, and strong practicality points that would surely win the hearts of many families out there.

Are you now decided to get a brand new Ford Everest? If so, then, don’t hesitate to click on the ‘Get Quote’ button—it’s absolutely free. You could even request to test drive the cars so you would know what you’ll like about them, first hand.