Ford’s Ranger Raptor is the undisputed best-driving pickup truck in the Ford lineup. When the model first launched, dealers couldn’t keep up with demand and showroom floors were devoid of the muscular variant of Ford’s ever-popular model. Time has passed, and the Ranger Raptor is still top of the heap. It still is the most capable pickup in the Philippine lineup.

So what does Ford do heading into 2021? They release the Ford Ranger FX4 MAX. We were able to review the 2.2-liter, or the entry-level, variant of the FX4, but the “MAX” in the name raises an eyebrow. Ford says it’s more special than the normal FX4, and it appears to close the gap in terms of Ford’s lineup between the ordinary variants and the extraordinary Raptor. With the Wildtrak being a staple, the FX4 MAX injects a bit of flavor to the platform with a few redesigned elements and performance enhancements. So the question remains: How does the Ranger Raptor compare with the FX4 MAX? For starters, the Ranger Raptor is definitely bigger and burlier than the FX4 MAX. The bulging panels and fenders are the envy of many. Coming in at 5,398 mm length, 2,028 mm width, and 1,873 mm height, the Raptor is definitely not a modest pickup. The truck also rolls on a wide set of 17-inch wheels, with a ground clearance of 283 mm.

Meanwhile, the FX4 MAX’s dimensions are pretty standard for its segment, coming in at 5,354 mm length, 1,860 mm width, and 1,852 mm height. Just by looking at the specs, you can tell that the FX4 MAX will be easier to drive in tight spots like in bad traffic, or through small backroads. You get 17-inch wheels that are blacked out like the Raptor’s, but it’s narrower than the Ranger Raptor’s set. The ground clearance comes in at 256 mm, which also makes it easier to get in but not as good if you’re bombing the trails. 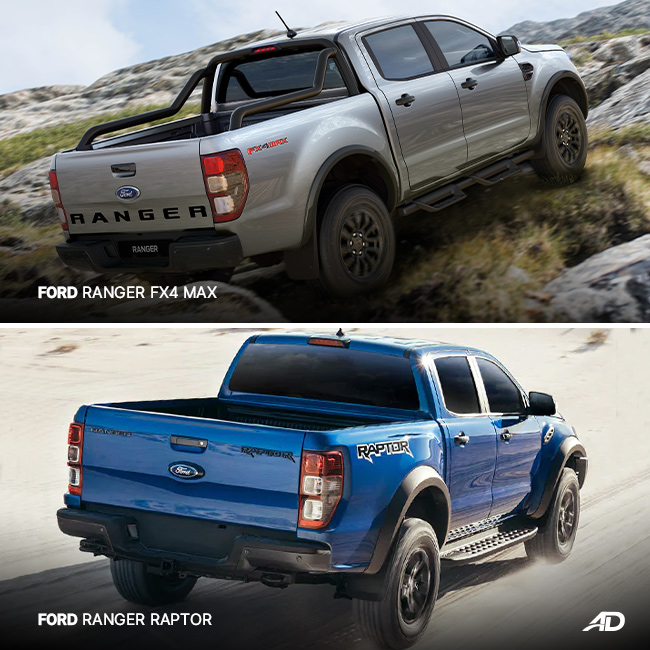 As for the trimmings, the grille of the FX4 MAX is almost similar to the Ranger Raptor’s. They both get the large F-O-R-D name molded in, but the Raptor has a few more openings in the grille. The bed of the Ranger Raptor comes with a liner, but the FX4 MAX has that as well as sports bars that make it look more practical to some extent.

Noting the differences, it’s clear that there is something special about the Ranger Raptor still, however, we cannot deny that the FX4 MAX is also unique when compared with other Ranger variants. The Ranger Raptor has a similar interior to that of the Wildtrak. Leather seats with blue stitching add a ton of style to the Raptor. You also get an embroidered logo on the upholstery, and the steering wheel even gets a red position marker flanked by two 10 and 2 grips that help with ergonomics. Sport pedals also add a bit of flair to the footwells, but that’s a feature that is also present in the FX4 MAX.

The FX4 MAX, on the other hand, also gets a leather interior from the factory, but it’s more understated and not as in-your-face compared with the Raptor. Still, there are sporty hints in the FX4 MAX thanks to the carbon fiber pattern panels in the seats. It’s a no-frills interior that’s more practical than overdressed, for no-nonsense individuals.

We do prefer the trimmings of the Ranger Raptor. The cockpit is just a nicer place to be in. For many, however, they will appreciate the leather of the FX4 MAX and its subdued look. If you buy a Ranger Raptor, it’s definitely a commitment since the blue accent color could get old over time, but as it stands, we’re still very much in love with how the inside of the Raptor looks and feels. 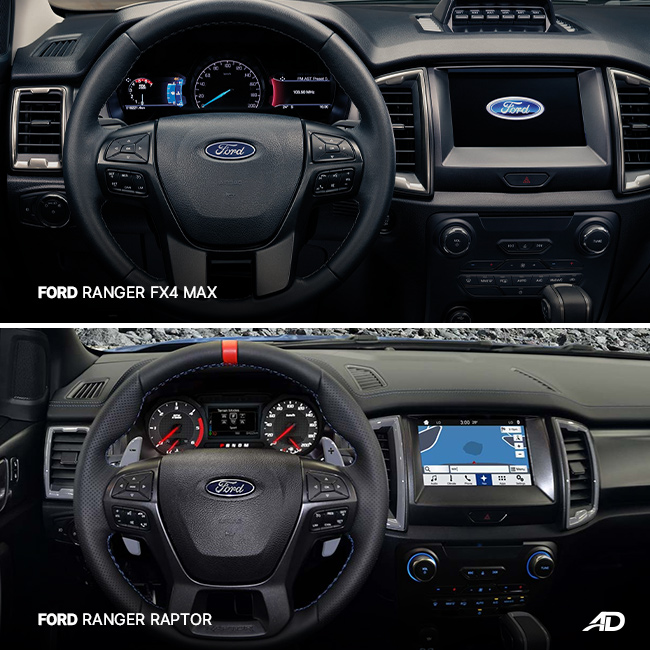 The infotainment is the same for both models. Ford’s 8-inch infotainment system with Sync 3 is still good, but we find that the screen is a bit dwarfed compared with the rest of the competition, but apples-to-apples, Ford-to-Ford, both are plenty capable and still retain the fully featured Ford experience, thanks to Apple CarPlay and Android Auto, as well as a 6-speaker audio system. Both are push-to-start, with keyless entry, and both are also equipped with automatic climate control.

However, the main differences lie in the other tech and safety equipment. While the Ranger Raptor is a fully featured, top-of-the-line Ford pickup, the FX4 MAX is kitted out like a mid-ranger with dual front airbags, cruise control, hill descent control, hill launch assist, stability control, traction control, rear parking sensors, and of course, an antilock braking system (ABS) with electronic brakeforce distribution (EBD).

You will find more airbags and more features inside the Ranger Raptor. In the top-end variant, you’re getting side and curtain airbags, bringing the total to 6. On top of the FX4 MAX’s kit, you’ll get a lane departure warning system as well.

There is no doubt that the Ranger Raptor has more kit than the FX4 MAX. Costing substantially more, it should, but it’s not as amazing as the kit found on the Wildtrak with adaptive cruise. Both trucks have Ford’s 2.0-liter Biturbo diesel engine that outputs 210 horsepower and 500 Nm of torque. Both engines are mated to a 10-speed automatic transmission. We expect that the Ford Ranger FX4 MAX will be faster than the Ford Ranger Raptor given that it is lighter. Over rocky roads, however, we’ll have to hand it to the Ranger Raptor.

However, the FX4 MAX will put up a fight because it comes equipped with 2-inch Fox shocks, similar to that of the Ranger Raptor’s. However, the Raptor's shocks measure 2.5-inches in diameter. Aside from that, the main difference between the two is that the Ranger Raptor has coil springs in the front and rear, which means that it will be better for driving performance, but substantially worse for load-bearing. The FX4 MAX has coils in the front and leaf springs in the rear, allowing it to carry heavier loads. If you’ve ever seen a Ranger Raptor’s rear dipping down with its bed loaded, it’s because the truck can only carry up to 748 kg of weight, while the FX4 MAX is sturdier and is able to haul up to 981 kg, making it a more practical option.

In the performance category, it all depends on what you value. If you place more importance on performance and drivability with more comfort and reasonable practicality, then the Ranger Raptor is a perfect choice. However, if you are looking for practicality and load-bearing capability more than driving dynamics, the FX4 MAX is a worthy option. Overall, the FX4 MAX is a jack of all trades which can hold a candle to the Ranger Raptor, thanks to its shock absorbers, but it isn’t as comfortable and doesn’t handle as well, too. One thing’s for certain, you will miss the fun while in Baja mode, which is a feature exclusive to the Ranger Raptor.

While the Ranger Raptor does look like it is the clear winner in this sibling rivalry, the main reason why it’s not a clear-cut winner is its price. It comes in at P1,998,000, just P2,000 shy of the P2,000,000 mark. Capability-wise, it’s a great truck. It drives great, and has a set of killer features and show-stopping looks. At P1,698,000, however, we find that the Ford Ranger FX4 MAX is quite a bargain considering what you get. You get part of the reason why the Ranger Raptor performs so well, and you’ll get plenty more load-bearing capability.