Toyota is a well-established brand not only in the local context but throughout the entire globe. The Japanese automaker has made quite a strong statement in terms of reliability, and it has indeed served as a strong foundation of the brand in building its vehicles. Locally, MPVs continue to flood local roads, and Toyota’s are known to be a leader in this segment. Take the Rush as an example, the model has been selling like hot cakes given that it has the versatility of an MPV infused with a bit of SUV DNA. That is then accompanied by an affordable price that should appeal to the masses.

Years have passed and the local automotive industry has evolved indeed, with new players from China venturing into the Philippines market. In a short span of time, Geely has garnered great success from its two models, the subcompact Coolray and the compact Azkarra. Will the larger yet surprisingly more affordable Okavango garner equal or greater success than its smaller stablemates?

Both of those models above are qualified for a head-to-head comparison. Apart from being 7-seaters, prices of the two vehicles are somewhat close in specific trims, namely the range-topping Toyota Rush 1.5 G AT and the entry-level Geely Okavango 1.5 AT Comfort. With all that said, let us then see which model comes out on top of this battle. We are aware that the Urban variant brings a lot more features with a more expensive price tag, but since we want the comparison to be closer, we’ve opted for the more affordable variant of the Geely to pit against the Toyota. So shall we begin? 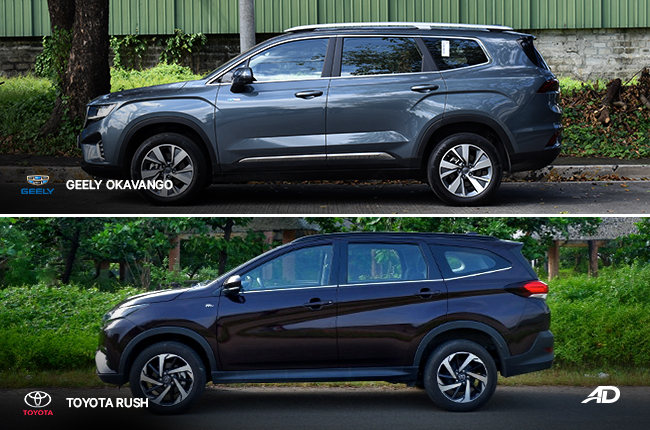 Both vehicles look good, in their own way. While the Geely Okavango shares traits from midsize and compact crossovers, its price is much closer to that of the MPVs and it’s positioned as such in the Philippine market. Just to make it a bit clearer, Geely’s 7-seater showcases the looks of a crossover combined with the features of an MPV, therefore, making it a ‘Wonderfully Distinct’ vehicle. The Toyota Rush, on the other hand, is often described as the ‘baby Fortuner’ given its slight resemblance, at least with the midsize SUVs pre-updated version.

It is worth noting that the exterior dimensions of both models happen to be quite far apart from each other, with the Okavango having a more midsize approach over the Rush’s small MPV size. Respectively the Toyota has a length of 4,435mm, 1,695mm of width, 1,705mm of height, and 2,685mm on its wheelbase. As mentioned, the Geely is indeed larger, and in order to support that, its length equates at 4,835mm, 1,900mm for the width, 1,785mm for the height, and 2,815mm for its wheelbase. However, it is worth noting that the Rush has a higher 220mm ground clearance than the Geely’s 194mm.

Upfront, both models in their respective trims get LED headlights with DRLs, while the Okavango stepped up a bit with the addition of LED units of its fog lamps making it a better adage over the halogen fog lamps found on the Rush. Wheels, on the other hand, have equal dimensions on both the Rush 1.5 G AT and Okavango 1.5 AT Comfort, specifically 17-inches wrapped in 215/60 tires, while the two also get roof rails for functional and aesthetic purposes. Lastly, the Okavango gets a full-LED unit while the Rush only features partial LEDs paired with bulbs.

After a thorough evaluation of both exteriors, we decided to give the crown to the Okavango given its expansive dimensions and its overall execution which does keep this 7-seater in line with the rest of its stablemates. Despite that, the baby Fortuner is still on for a show, it might not be as flashy as the Geely since it is already a common sight and a bit dated, but it certainly does look good in its own way. 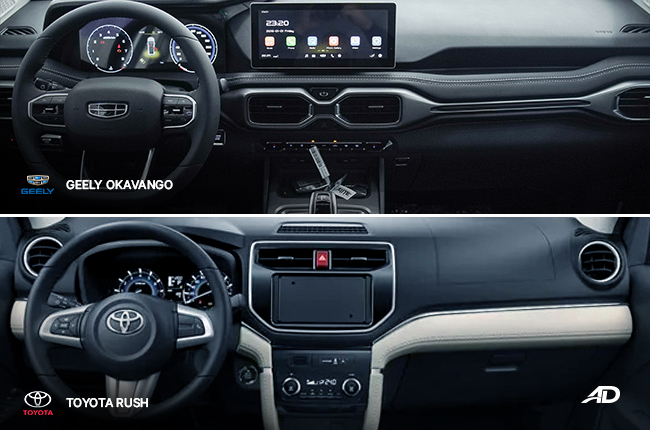 Given that the dimensions of the Geely are larger than of the Toyota, space is perhaps more generous inside. The biggest advantage of the Geely over the Toyota is its flat-folding third-row seats which then translates to a colossal-like cargo. But don’t get us wrong, the Toyota still serves its purpose as an affordable 7-seat transporter.

Since the Rush is being compared with the entry-level Comfort of the Okavango, both vehicles then benefit from fabric seats. While the Geely gets an all-black colorway, the Toyota, on the other hand, made notable efforts of making the Rush’s cabin contrasted with some cream details which does give it a dash of class.

Keyless entry as well as a push-start is also available on both MPVs. The two also come with automatic climate control but only the Geely benefits from a 3-Zone system. For the Rush, only second-row occupants get a taste of the AC, while on the Okavango, even the third-row will be cooled with individual air vents.

Going over the most important aspect of vehicles, the infotainment system. The Toyota Rush 1.5 G AT comes with a 7-inch touchscreen with Weblink Connectivity, while the Geely Okavango 1.5 AT Comfort gets a larger 10.25-inch touchscreen with QDLink. The Rush tops over the Geely with its 8-speaker sound system, with the Okavango Comfort only being equipped with a 4-speaker setup. It is worth noting that the Geely gets an electronic parking brake with an auto-hold feature, something that you can’t find even on the range-topping G AT of the Rush.

The Okavango was sprinkled with lots of features when in comparison with the Rush. However, equipment on the Rush still seems quite generous for its price tag, and all those fancy bells and whistles on the Geely does come at an extra cost. It actually does depend on your budget, but with a bit of a stretch on your pocket, the Geely Okavango Comfort does seem like an enticing vehicle for its price even if it is the more affordable variant. 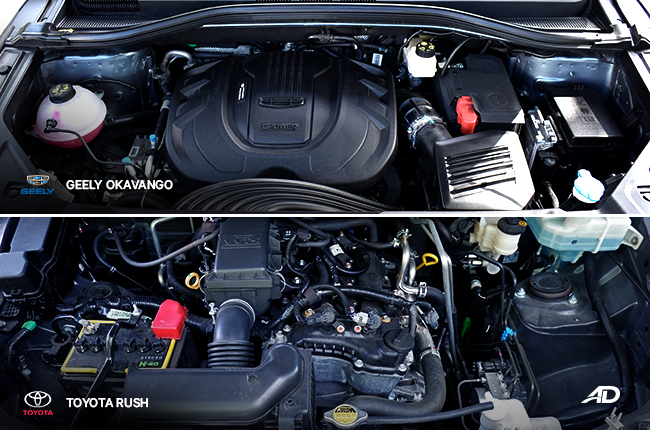 Generally, the Toyota Rush runs with a regular gasoline motor while the Geely Okavango gets fancy with the 1.5-liter 3-cylinder engine that’s combined with a 48-volt electric motor, therefore making it a mild-hybrid. Respectively, power figures of the Okavango rate at 190 hp and 300 Nm of torque, which is miles away from the Toyota’s mill. The Toyota Rush’s power figures equate to 102 hp and 134 Nm of torque which aren’t exciting. Quite surprisingly, you can already acquire such a modern and powerful engine for P100,000 more. The Geely is paired with a 7-speed wet DCT while the Toyota gets a 4-speed automatic. Though we cannot deny that simpler is oftentimes better in terms of longevity, however, the smoothness and the power of the Geely is undeniable especially when on the road.

That said, we hereby conclude this round with the Geely Okavango claiming the crown, once again given its modern yet powerful mill. 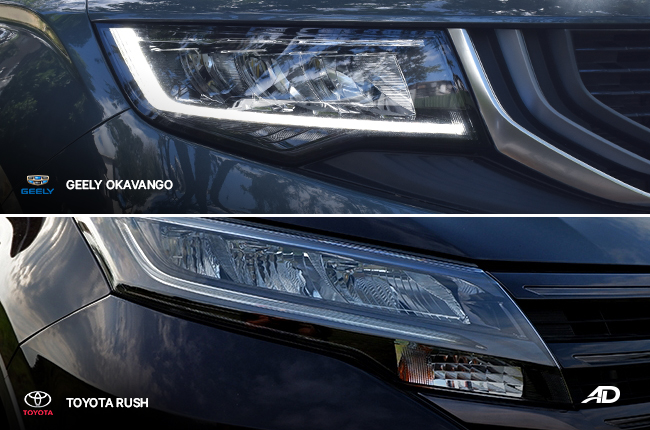 Perhaps, this is where Toyota now takes the lead. While the Okavango Comfort only gets a driver and passenger airbag, the Rush, on the other hand, stepped up given the addition of side and curtain units. As for common safety features, both get Anti-lock Braking System (ABS) with Electronic Brakeforce Distribution (EBD), immobilizer, and rear parking sensors with a reverse camera. Now, there is also some exclusive equipment on the Okavango Comfort, the following include Hill Descent Control, Hill Start Assist, and a Tire Pressure Monitoring System.

While the Geely Okavango does not have any ASEAN NCAP ratings just yet, the Toyota Rush proves its worthiness all thanks to its 5-star safety rating. Therefore, making the Rush a safer choice with a favorable result from the ASEAN NCAP. Now, in the future, there is a possibility that this might change once the Okavango finally receives an official rating from the ASEAN NCAP, for now, we’re declaring the Toyota Rush as the winner of this round. 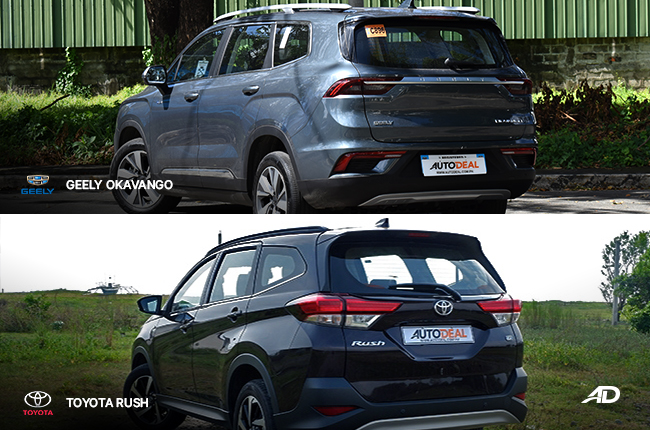 If we are to talk about pricing on both respective variants, the Toyota Rush would come out as the successor. Numerically speaking, the Rush 1.5 G AT is only priced at P1,100,000 while the Okavango 1.5 AT Comfort then retails at P1,208,000. Do take note that the additional pricing on the Okavango does give you a lot more, but since we’re competing in terms of affordability, the Toyota Rush, once again, conquers this round, though that could be subjective as P100,000 can net you a lot more features and tech as well as a better engine. Still more affordable is more affordable, and you’d be buying into the most popular brand in the Philippines, so we cannot deny that factor. 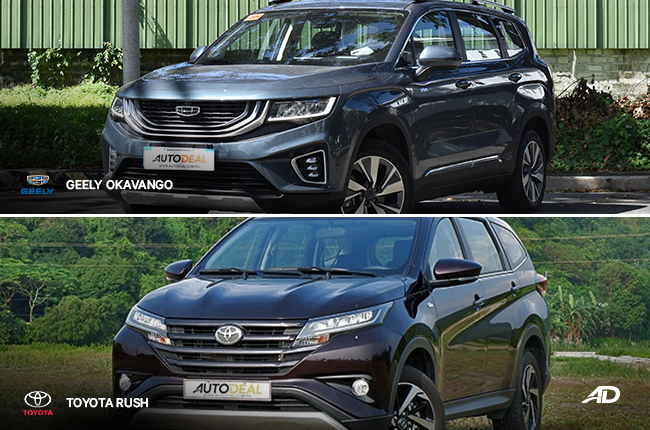 After a thorough assessment of both MPVs, we’ve come to the conclusion that the new kid on the block outranks the ever-popular Toyota Rush in several aspects. Though we do know that the pricing of the Okavango Comfort requires P108,000 more. That additional cost is justified quite well given the number of additions you’d get, from high-tech features to practicality. It just turned out to be a better package. It’s an MPV infused with a bit of SUV, and that is perhaps why this vehicle is tagged as ‘Wonderfully Distinct’.

While the Toyota Rush might have lost this battle, kudos to Toyota for making this MPV affordably priced without sacrificing those much-needed essentials especially its safety equipment, all in a simpler package that will definitely stand the test of time given good maintenance.