The Mazda CX-9 is the Japanese automaker’s flagship model in the Philippines. It comes with the premium feel and the luxury features one might expect from a vehicle of its status. However, the crossover is getting a bit long in the tooth as its design hasn’t radically changed over the past few years. To remedy this, Mazda Philippines has recently brought in the refreshed version of the crossover that comes with minor tweaks to its design along with an updated set of features befitting the vehicle’s premium status. That being said, with these new upgrades is the Mazda CX-9 still worth it, especially in a sea of SUV competitors that come with an advanced feature set? Mazda’s Kodo design language works well whether the vehicle is a sedan, a hatchback, or a crossover. It's the long hood and subtle curves that make the vehicle stylish and unique. It also gives it a premium look. The large grille at the front also complements the vehicle’s design along with its sharp LED headlights. Overall the Mazda CX-9 gives a minimalistic design that just works well. It speaks volumes for itself, especially against competitors that have gone with a bulkier and flashier design. The CX-9 just does things differently with its elegance in its design.

Mazda also recently updated the CX-9 by giving it a new grille along with a new set of wheels and a new exhaust at the back. While these changes are subtle Mazda also changed a few things in the cabin of the vehicle. 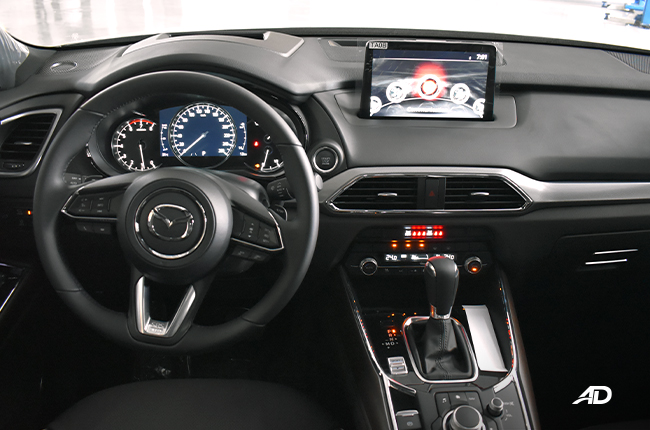 To match its premium and sleek exterior design, the Mazda CX-9 also comes with an equally elegant interior. Staying true to its Jinba Ittai design philosophy, the interior of the vehicle is more driver-centric, however, the materials used are much better and offer a premium feel. Soft-touch materials are plentiful and are positioned strategically in high-touch areas. Climate controls are very easy to use and even sound crisp when you rotate the knobs for it. You can easily tell that someone at Mazda had the job of tuning just the feel and sound of these buttons which is great especially as the CX-9 is positioned as a premium vehicle. Mazda also recently changed up the seats in the crossover and gave it a new design along with a new color scheme to continue its premium look and feel.

Up to date technology The Mazda CX-9 won’t be found lacking in terms of the technology it carries. As it is the flagship model you can expect the best that the Japanese automaker has to offer for the local market. This means that the midsize crossover comes with a 9.2-inch infotainment display that comes with wireless Apple CarPlay and Android Auto capabilities. It also comes with a 12-speaker, Bose sound system, a wireless charging pad, paddle shifters, G-Vectoring, and an auto-hold function for all of its variants. Aside from this the crossover also gets dual-zone climate control, rear parking sensors, a backup camera, as well as cruise control, and the uber convenient keyless entry with push to start functionality. Upper trims will receive adaptive LED headlights, a heads-up display, as well as ventilated front seats, and an auto-dimming rearview mirror. Under the hood, the Mazda CX-9 packs a 2.5-liter turbocharged gasoline engine that pushes out 228 hp and 420 Nm of torque. This power is then sent to either the front or to all four wheels via a six-speed SKYACTIV-Drive automatic transmission. The Grand Touring model, its 4WD system features the brand's i-ACTIV AWD mode, which is consisted of 22 sensors that could adapt to various road conditions. While it may not be as trail-ready as its other SUV-based competitors it can still go on light trails.

As most of the competitors of the CX-9 aside from the Ford Explorer come with turbodiesel engines, this gives the Mazda crossover a unique advantage over them thanks to the smoothness that a gasoline engine can deliver. 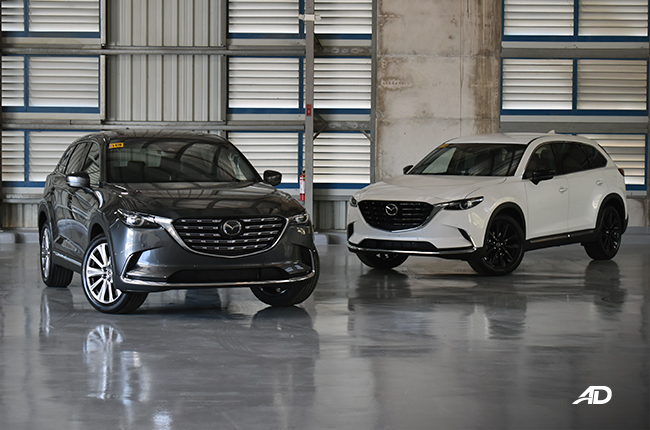 Another key point that the Mazda CX-9 makes against its competitors is its strategic lineup of vehicles. At its most affordable the crossover can be had for P2,490,000 which is already great considering the standard features that the Touring model carries. Moving up a tier and you have the Black Edition model which as its name suggests comes with more black accents. Then you have the cream of the crop in the form of the Exclusive variant which comes with all the bells and whistles and is all-wheel drive.

Overall the Mazda CX-9 has got what it takes to take on its other SUV and crossover rivals in its segment. The only problem is its price point which can be a bit steep for some. However, given the unique proposition that the Mazda crossover gives to prospective buyers, it's definitely worth it if they have the money for it. The unique design separates you from the rest of the traffic, the great driving dynamics make the vehicle a breath of fresh air to drive, and its feature set makes it easy to use and adds to its premium aesthetic.