If you are reading this article, chances are you do live in the Philippines – a country laden with bad traffic, bad roads, and tight spaces. So a small and tall car would be ideal, right? Not really. This is because Filipinos, for some reason, love seats. Whether it is to ferry their bigger-than-average family across the Metro or to bring back the week’s groceries, 7-seaters are becoming a trend for the average car buyer. In fact, the most popular car on our site at the start of 2019 was the Toyota Rush, a 7-seater entry-level SUV.

Our two contenders here are more premium than MPVs, however. They do offer more features for a price. SUVs sit on a body-on-frame chassis, as opposed to crossovers that have a monocoque body construction. SUVs in the Philippines include the likes of the Mitsubishi Montero, Toyota Fortuner, Nissan Terra, and Isuzu mu-X, among others. Minivans, on the other hand, are bigger MPVs with sliding doors. Local examples are the Honda Odyssey, Kia Grand Carnival, and Toyota Alphard. They don’t fall in line with the Toyota Hiace, Nissan NV350, and Hyundai Starex, which are all full-size vans. If you are in the market to buy a vehicle, chances are ride comfort will be high on your list. This will especially hold if you plan on bringing your entire family with you now and then. Ferrying kids will be hard if they are getting jostled about in the cabin because of an uneven road.

While SUVs are reasonably comfortable, their main limitations are their chassis and the suspension setups. Most midsize SUVs have an independent front suspension, but most have a dependent rear in the form of a live axle. Couple this with the multi-piece construction of the frame, while solid, still isn’t as air-tight as a monocoque, because vibrations may seep in between the seams of the chassis’ assembly points.

A minivan, on the other hand, gives you better ride comfort compared to its SUV counterpart.  Since it has a monocoque chassis, it rides smoother and more pliantly over bumps in the Metro. Coupled with fully independent front and rear suspension, it puts ladder-frame SUVs to shame in terms of coddling their occupants. Unlike minivans, however, SUVs can go almost anywhere. With a diesel engine bolted in, and a drivetrain that can come in 4x2 or 4x4 flavors, it can bring you almost anywhere. The added ground clearance does wonders, as well. You might not be gliding over the surface, but the under chassis will come out unscathed over humps and other common obstacles on the road.

In the case of minivans, they can come with either gasoline or diesel engines, while SUVs mostly come with diesel variants, save for the gasoline-powered Fortuner. However, they are less versatile as they won’t be able to go off-road effectively. Some models do come with an AWD system which is great especially if you need that extra pull or push uphill.

There is no question, that SUVs are more performance-oriented. Engines found in these models are capable performers because of all the torque on tap. An option for a 4x4 system is also a bonus. While minivans aren't slouching, they can’t go off-road as capably as an SUV, though why would you try? 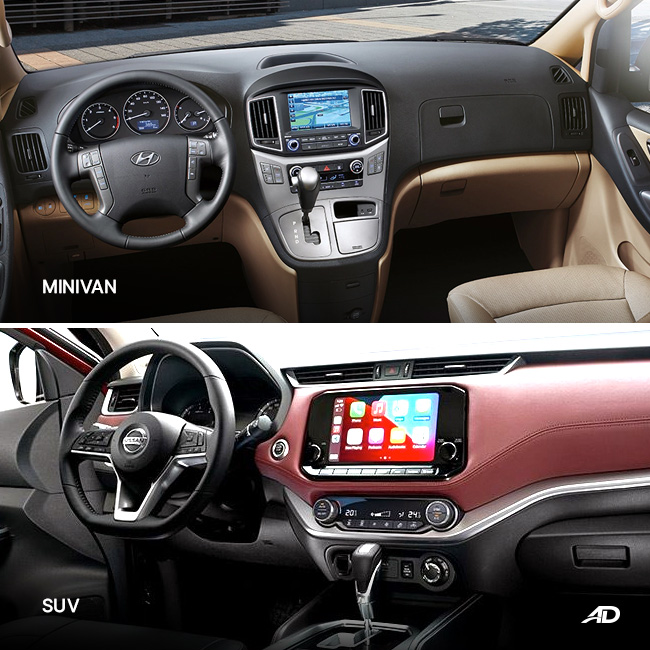 When it comes to being a passenger or a driver in one of these cars, it’s a bit of a split. One offers driver comfort, while the other is geared towards its passengers.

An SUV, on the other hand, is pretty spacious as it is. Granted it is not as spacious as a minivan, but it does get the job done. Where this body style excels is the more driver-centered features. The seating position for the driver is less upright, but only marginally so. This, however, makes some difference when it comes to driving the vehicle. Move on over to the middle or back row and you'll find that the space that you see is pretty much the space that you get. It isn’t as modular or flexible as a minivan. If the middle row has rails, it usually is shorter than the average minivan's. In the back seat, you can forget rails because those things are fixed.

A minivan is a car to be driven in. Especially if the unit comes equipped with captain’s chairs, it’s nothing but comfort and bliss for the entire journey. Some minivans come with benches to maximize the seating capacity, but the legroom is where a minivan excels, provided that you’re not relegated to the rear seats. With four occupants, including the driver, a minivan is a joy to ride. And you also have more adjustment options for the middle and back rows to modulate the leg space. This means that you can maximize space if only a few are traveling, or you can maximize passenger capacity in case you’re hauling a party in the back.

It depends if you want to be driver-focused or passenger-focused. In minivans, features extend to the rear, while in SUVs, you do get rear ventilation, and perhaps some power outlets, or even a TV in some models, but that’s about it. This is where it gets a little interesting. Groceries are undoubtedly a part of family life. You’ll find that both have only a few differences separating the two.

In minivans, since it is very modular, you will find that you can fit almost the same amount of cargo as an SUV. Depending on the model the space should be ample enough to rival the cargo area of its taller opponent, which leads us into our next bit – you wouldn’t have to lift the items so high when loading a minivan. Granted there is no load lip like a trunk of a sedan, but if it means less effort on your part to load your supplies, that’s a win.

SUVs, on the other hand, can hold just as much if not more than a minivan. We also have to consider that while minivans can come with diesel engines in some models, SUVs come with bigger displacements meaning they can pull a lot more weight. The chassis itself is also pretty robust. Since most SUVs in the country are based on pickups, the traits of these capable haulers are passed down to the roofed versions.

So, it depends. Both platforms share some similarities but both also differ in smaller ways. It’ll depend on what you carry and your preferences.

It's a pretty close call between the two as they each come with their specialties that help make them both appealing vehicles to get. ultimately, however, this will all boil down to your personal preferences and needs. A minivan will give your passengers a better ride as these vehicles are more passenger-centric. If you prioritize passenger comfort above everything else then this kind of vehicle might be the right one for you. Take, note that these can be long vehicles so maneuverability might be an issue for you. 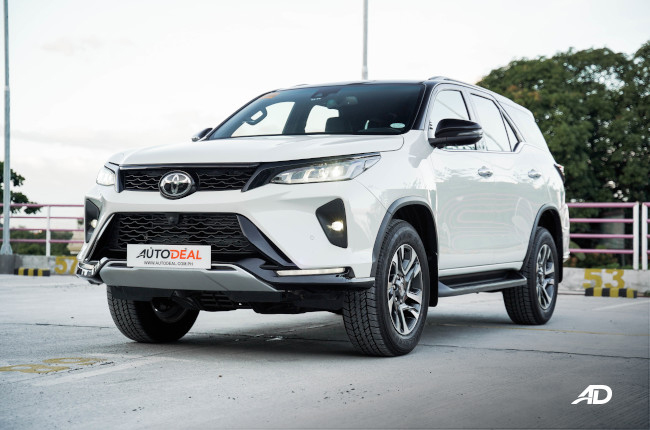 SUVs on the other hand offer you a more versatile platform as they can be used to go off-road. While passenger comfort isn't a priority for these kinds of vehicles, they are tougher and can be used in almost all kinds of terrain.

In the end, the choice is ultimately up to you. Whether you want all-out comfort, or the jack-of-all-trades vehicle is beyond us. We do recommend buying what you can afford and making a good decision. Arm yourselves with knowledge through our selection of reviews and when you’ve decided on the model you want, check out our Which Variant articles, as well.