Volkswagen Philippines invited us on a media drive to test out the 2019 Lamando. The trip took us to the City of Pines where we got to test out the capabilities of the car, as well as take it out to several art locations. The fleet of vehicles consisted of four Lamandos, two dark gray units in the SE and SEL trims one red unit in the SEL trim, and finally an older but important Lamando in white. The white unit, while being the pre-facelift version had the distinction of being one of the launch units here in the Philippines.

The trip started off at Volkswagen Quezon Avenue where we got a product briefing and had our units assigned to us. After that, we set off for Baguio. First on the list of things we had to tackle was traffic, it was easy for the comfortable vehicle. Then we headed for the highway to stretch out the Lamando’s legs and get a taste of the adaptive cruise control. 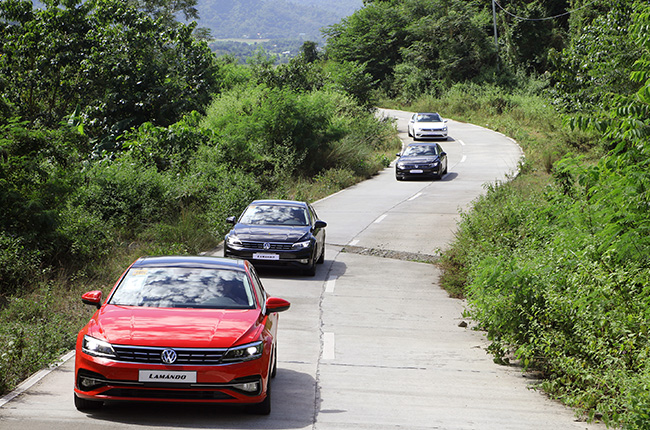 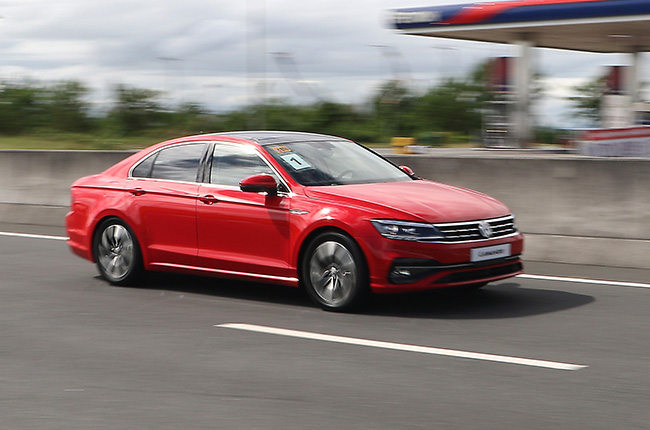 Continuing up to Baguio drive took us to Asin Road, which is an alternate route going up, leading through consecutive tight dizzying turns. The Lamando took it all in stride gobbling up the curves with gusto. The suspension was firm but forgiving. The ride was never jarring even when going over bumps. Even though the tight turns, the Lamando gelt planted and the vehicle always had grip. When wet patches would appear uphill, wheel spin would occur thanks to the turbo but once the tires hooked up, it was all systems go again.

The brakes of the Lamando never faltered, easily stopping the fully-loaded vehicle of four occupants and their luggage. Even in a fully loaded state and taking on the curves of Kennon road, which we got permission to use, the midsize sedan never showed any signs of brake fade. A reassuring feel especially when you are coming downhill.

Power from a small mill The 1.4-liter turbocharged gasoline engine might be small on paper – even coke bottles come in bigger sizes. Don't be fooled, however, the 1.4L power plant has a very noticeable kick to it. Floor the accelerator and the engine scrambles for boost and rockets the car forward. The 7-speed automatic does an excellent job of putting the power down. While it did have its hesitations coming from a stop, on the open road the car just goes. 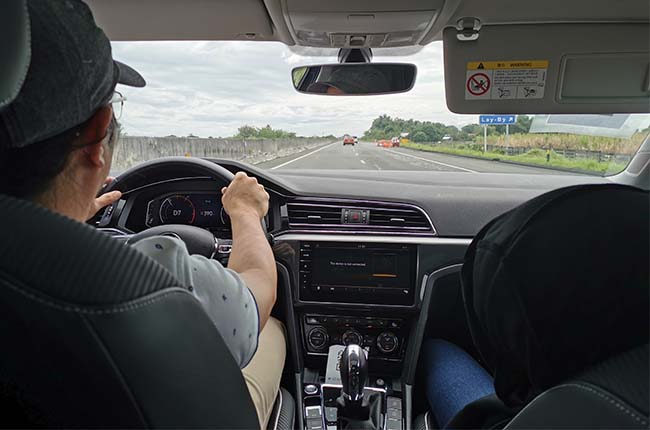 The Lamando has oodles of space and an excellent interior. With four of us in the car, the room was enough space to put out extra luggage in the middle of the second row. Adjusted to our driving positions, we had more than four inches of knee room at any given time. In my case, it reached double. To take it into context all of us in the car where about all above 5’5” feet tall. Even with a 6’10” foot driver at the helm, there was still plenty of room at the back.

The seats were also very comfortable enough so that each of us in the car had our turns catching up in sleep during the drive. The bolstering was soft but firm enough to keep you from sliding from place to place during turns. The heated seat function also came in handy for the colder parts of Baguio. Overall the interior felt just right for its price point. Soft materials were everywhere you would touch and the use of scratchy plastics is minimal.

Even the trunk of the Lamando had impressive space, taking all the luggage we could throw at it. While we did transfer a couple of perishable goods into the cabin to keep them nice and cool during transport, there was still plenty of space around. No menu juggling here as the two Lamandos I drove had easy-to-use infotainment systems. I was spoiled for choice as the white older Lamando had an 8-inch touchscreen and the newer version had 9-inch infotainment. It even has a handy feature of gesture control. This lets the driver focus on the road and impress the occupants of the car.

The 8-inch head unit is also Android Auto and Apple CarPlay capable of making phone mirroring a breeze. The 9-inch, on the other hand, had a mirror link instead. This handy feature made the highway stretches a breeze. There was no need for me to have my foot on the accelerator. The Lamando would do all the work in maintaining a safe following distance and to slow down the vehicle when needed. It even kept the vehicle fuel-efficient coming in at 14 km/L round trip. Impressive to say the least from a small displacement engine. The Volkswagen Lamando is an option worth considering if you want a midsize sedan. They say big things come in small packages and that's exactly what the Lamando's power plant is – a small engine with a big output.

Moreover, the interior quality really does live up to the standards set up by Volkswagen. The cabin feels premium and space is abundant in the vehicle. The infotainment and other features are on par if not better than its rivals in the segment. Its fuel efficiency is an added bonus.