Ford Philippines recently allowed us to go on a long road trip and food crawl with the Ranger Raptor. While we have reviewed the pickup truck before and it proved to be a capable off-roader, we wanted to try something a little bit different. We wanted to see if the Raptor could be an ideal daily vehicle that can also take you on a great adventure.

To start our journey, we decided to go to a few popular spots outside of Metro Manila to see if the Raptor could handle it all. While these were on paved streets, some of the destinations had steep inclines to tackle along with other challenges that would put the Raptor through its paces. Our first stop on the road trip was Coffee Rush. It is a great cafe that is located on top of a mountain within a subdivision. What you get once you reach the top is a great view of Laguna lake, a view of the Binangonan area, and a cool mountain breeze.

As weird as it may sound it was the perfect place to test out the capabilities of the Raptor in terms of how it managed to put the power to the ground. You see, on the way up to the cafe, you will need to pass through a rather tight uphill section of road. This gave us the chance to test the maneuverability of the pickup truck and how it kept its composure throughout the road. We are pleased to say that the Raptor, despite having all-terrain tires and 500 Nm of torque under the hood kept its cool. Where other vehicles were struggling to get up the road in first gear and at high RPMs, the Ford pickup truck took it in stride and simply brushed it off. Parking in Coffee Rush can be a bit of a hassle since it's all parallel parking it was another opportunity for us to test how easy it would be to park the Raptor. While its other competitors may have a 360-degree camera and a whole lot more sensors to aid in the process, the overall maneuverability of the Ford pickup truck was great. We found little issue with getting a spot and parking there promptly without too much of a fuss. A spur-of-the-moment suggestion ended up pointing us in the direction of Tagaytay in the hunt for some affordable yet delicious food. One of our guests on the road trip at the time suggested that we try out Samatha’s. So, we decided to try it out. What we were promised was great-tasting food at an affordable price.

This also allowed us to test out how the Raptor would behave on the highway and if was taxing on a long drive. Safe to say driving the rather large pickup truck was a breeze, especially with cruise control on. We were happily chugging along getting about 10 to 12 km/L on the highway. When we arrived at the venue we were surprised to see that it was still open despite us arriving pretty late into the night. Just as one of our guests pointed out the food was indeed affordable and was great as well. Out of the many food options available on their menu, we decided to go with our trusty pick sisig and rice, because why not plus it was also fairly cold at the time so we wanted something to warm up. 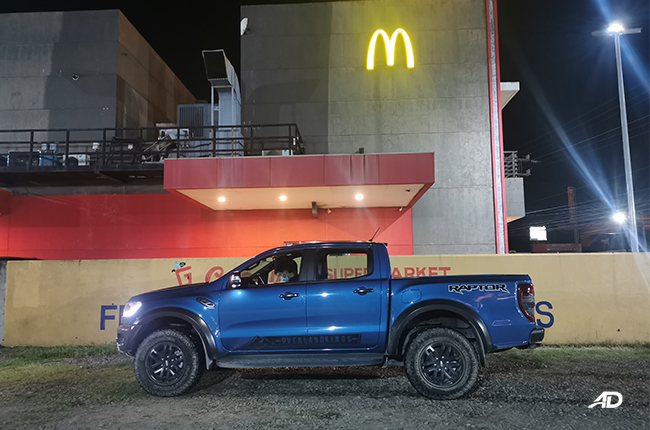 Our original plan the next day was to make a run for King Olaf’s steak house in Sta Cruz Laguna. Unfortunately due to conflicting schedules, we ended up leaving quite a bit late. Despite this, we pressed on to see if we could try to make it before closing time.

We didn’t make it, so we decided to head to a nearby McDonald's instead. Making the best of a bad situation, we thought on our feet and decided to just have a picnic at the back of the Raptor instead. Luckily right next to the Mcdonald's was an empty parking lot we were could have our picnic. We ordered our food and headed to the spot.

Despite the Raptor not having the same cargo carrying capacity as its other Ranger variants, the space at the back is still the same. This allowed us plenty of room to sit down and eat our food while admiring the relative peace of a rural fast-food joint. Even without the fancy steaks we originally set out to get it was still a fun experience. 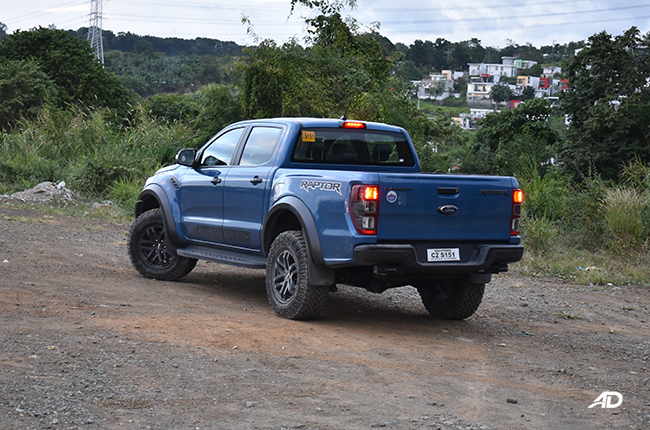 Overall, the Ford Ranger Raptor did everything we asked it to do and more. Its Fox Racing suspension despite being designed for off-road use was very pliant on the provincial roads and gave us the confidence to take on these uneven highways at speed without worrying about breaking any component of the vehicle. The 2.0-liter bi-turbo diesel under the hood also gave us plenty of overtaking power and torque to get us where we needed to go. Whether it was up the steep incline of the road going to Coffee Rush or through the winding roads heading to Samatha’s the Raptor took it all in stride and didn’t falter us one bit.