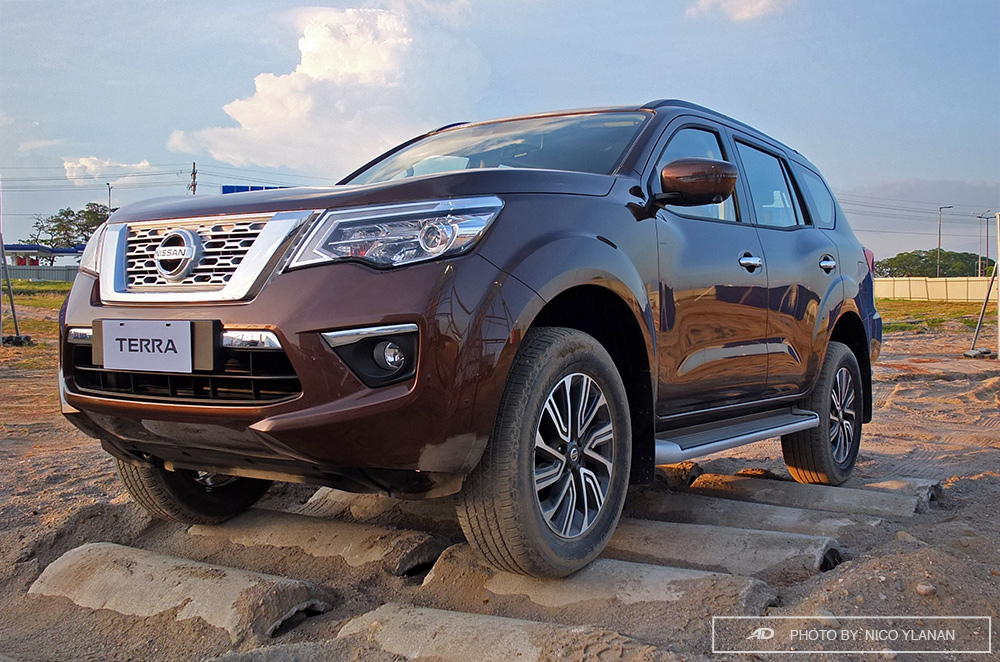 After months of teasing and roaming around the country, Nissan Philippines, Inc. (NPI) finally takes the camouflage wraps off the Nissan Terra. It's a rough and dirty launch, showcasing the off-road capabilities of Nissan's all-new midsize SUV.

The Terra is the newest addition to the automaker’s lineup, after the barrage of refreshed models that NPI introduced at the start of 2018. It’s set to take on the likes of popular nameplates such as the Toyota Fortuner, Mitsubishi Montero Sport, Chevrolet Trailblazer, Isuzu mu-X, and Ford Everest.

If the 2018 Terra’s exterior design is eerily familiar to you, well, you’re right. The all-new ladder-frame SUV is based on the Navara, which explains the lot of similarities with the midsize pickup truck. It’s also sort of a comeback in the segment for Nissan, with the Terrano as its last body-on-frame SUV we can remember. Guess it’s time for a Terra-yes this year. 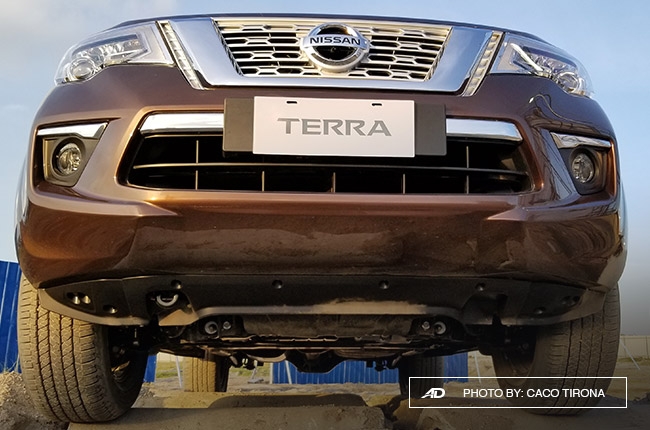 To give you an idea of the Terra’s size, it’s 4,885-mm long, 1,865-mm wide, and 1,835-mm tall, which is shorter and narrower than the Ford Everest, while having the same 2,850mm wheelbase. This places the Terra between the Everest and the Isuzu mu-X when it comes to size.

Up front, the midsize SUV’s scooped, muscular bonnet is highlighted by a wide V-Motion grille. Its automatic LED boomerang headlamps is accentuated by sharp angular daytime running lights (DRL) that make the midsize SUV look bold even at a glance. There are also forgivable splashes of chrome all over the car, just like the other vehicles in its class. In profile, the Terra boasts defined cuts and character lines, seen flowing atop the protruding fender flares and across the two door panels. Visible in this view are the step board for easy ingress and the 18-inch two-tone alloy rims with a design similar to what the 2018 X-Trail has. The vehicle’s 225mm ground clearance, 32.3-degree approach angle, and 26.6-degree departure angle make the Terra capable of conquering off-roads, too.

The aggressive styling continues at the rear, with the wide LED taillight mimicking the sharp DRLs up front. The rear spoiler seals the deal, together with the rear fog light, and skid plate. It's a huge reminiscent of the Patrol, especially with its robust and muscular bumpers. 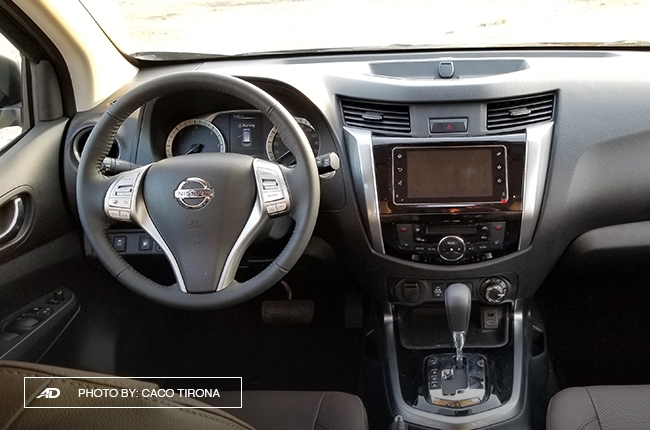 Inside the Terra, you’ll get similar layout as with the Navara, which includes the white headliner, three-spoke steering wheel, curvy dashboard, and the good-looking LCD multi-information graphical display right at the center of the instrument cluster. The use of silver soft plastics and chrome accents is also apparent, as well as the piano-black embellishments surrounding the gated gear shift lever.

Nissan equips the Terra with brown leather, ambient lights, and automatic climate control. Now, what’s new is the one-touch remote fold and tumble for the second row seats, which is the first in its class, by the way. It also has an Around View Monitor – one of the arsenals of the Nissan Intelligent Mobility Suite. As part of the package, the range-topping VL variant gets Lane Departure Warning, Blind Spot Warning, Hill Descent Control, Hill Start Assist, Around View Monitor with Moving Object Detection, and Smart Rear View Mirror that allows to see images from the camera mounted at the rear. The second row gets decent legroom, foldable armrest with cupholders, A/C vents, and a foldable LCD screen from the ceiling. There’s not much toys at the third row except for A/C vents and cupholders, but we reckon that there’s enough room for two average-sized adults.

If you will use the Terra for cargo, the trunk can be maximized by folding all the seats flat with easy access via its lipless bay. 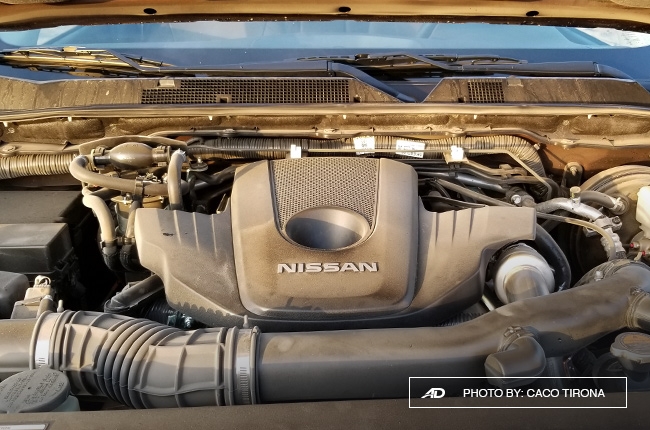 Under the Terra’s hood is the 2.5L YD25 DDTi turbodiesel engine that can produce 190 hp and 450 Nm of torque, partnered with a seven-speed automatic transmission with manual mode. There’s also six-speed manual transmission variants available for those who prefer stick. Both 4x2 and 4x4 variants are available, with the latter controlled by a rotary knob and has rear differential lock for optimum off-road performance. All variants are equipped with six airbags (driver, passenger, curtain, and side).

While many will argue that the Terra’s arrival is a bit late for an already saturated midsize SUV market, it won’t really matter as long as the vehicle offers great value for the Filipino car buyers. Now, will the Terra live up to its expectation on actual roads? We’ll make sure to get our hands on it, and keep you posted with our full, in-depth review.