More than a year after its debut in Los Angeles, Jeep Philippines, under the Auto Nation Group (ANG), finally brings in the 2019 Jeep Wrangler. The fourth-generation off-roader that stands by the code JL is ready to get dirty with Philippine dirt and win the hearts of Filipino car buyers, both off-roaders and in-city dwellers alike.

For starters, the 2019 Wrangler JL Unlimited (four-door) is bigger than its more-than-a-decade-old JK predecessor by 3.5 inches. Even with its size increase, the all-new Wrangler is lighter by 200 pounds than before, thanks to the all-aluminum body. Design-wise, the Wrangler wouldn’t be a Jeep without its seven-slot vertical grille and round headlights. This time, however, it has been re-sculpted to have a more imposing fascia than before plus the addition of horizontal daytime running lights next to the turn signals. The Jeep emblem has been removed at the front while the bumper has been redesigned, as well. Moreover, the top, windshield, and the doors are easier to remove with the lighter aluminum construction. In fact, in a live demo, the executives of ANG were able to “dismantle” the Wrangler in 10 minutes and 12 seconds, converting the boxy SUV into a full-fledged, open-air off-roader.

The sides have been restyled a bit, but you’ll be hard-pressed to find the differences. The overhangs have been increased significantly, though. Nevertheless, the 2019 Wrangler has a 41.4-degree approach angle that’s combined with its 17-inch all-steel black wheels. Rear, on the other hand, remained virtually the same except for the restyled taillights. Under its hood, the 2019 Wrangler Unlimited Sport is powered by a 2.0-liter turbocharged inline-4 gasoline engine that’s capable of producing 268 horsepower and 400 Nm torque. Transmission is taken care of an 850RE eight-speed automatic, sending the power to all four wheels. 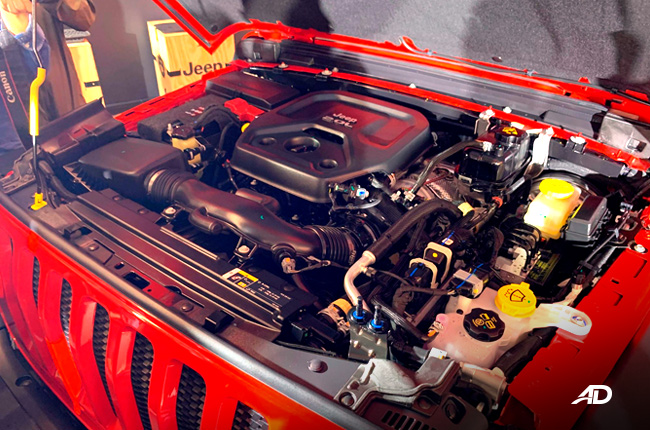 For maximum off-roading capability, the 2019 Wrangler Unlimited is equipped with heavy-duty suspensions with gas shocks. The 4x4 modes can be switched via the SelecTrac full time 4WD system.