Mitsubishi rattled the midsize pickup segment with the 2019 Strada’s (Triton or L200 in other countries) arrival in Thailand. The day for Mitsubishi to show its competitors in the pickup realm what the tri-diamond brand is all about when it comes to utility vehicles has come.

The Philippine market currently has the fifth-generation Strada and has been around the global market since 2015. For 2019, the Strada was groomed to wear the Dynamic Shield design language that has been inherited from earlier-released models like the Montero Sport, ASX, and Xpander to name some. With a set of C-shaped chrome accents making an ‘X’ impression on the bumper, squinting headlights with running lights, and oversized rectangular fog lamps on the bumper, the 2019 Strada seems to be more than ready to face its rivals. 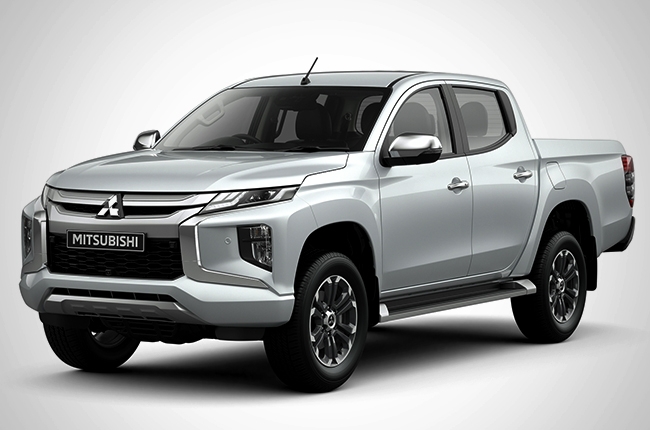 Speaking of the lights, we are aware of the Xpander’s lights being confused by some people. On the Xpander, the upper slim lamps on the same level as the emblem are actually DRLs, while the large lights on the bumper are its actual headlights. For the 2019 Strada’s case, it appears that the top lights are actual headlights based on the official photos. To support this assumption, Mitsubishi described it as “beefier looking lamps located higher up.” Confused? So are we.

Related: Tips & Advice: How to dress up your pickup

On the side and on the rear are re-sculpted body curves, sharp character lines, and extended wheel flares. Its wider front profile along with the Dynamic Shield face-treatment gave the refreshed Strada a more muscular exterior composition, adding up to its intimidating appeal. Include the interior changes, which now features a more modern and robust approach in cabin comfort with soft-pad materials and stitching on the armrest, parking brake cover, and floor console. What is regarded by Mitsubishi as “one of its most important global strategic models” doesn’t only feature a new face, the 4WD system has also been enhanced for a much better off-roading experience. The facelifted Strada’s 4WD models are fitted with either the Super-Select 4WD for optimum all-terrain traction and handling or the Easy-Select 4WD for quicker drive mode switching.

What’s even more interesting is the fact that the two 4WD modes have a new Off-road Mode, which you can use to customize the drive setting whenever you’re traversing muddy, snowy, sandy, or rocky terrain. We can omit the Snow Mode unless global warming gets worse on a major level that we begin having white Christmases. Vehicle speed, on the other hand, is electrically controlled to let the driver traverse steep or slippery descents safer.

Now that we began talking about safety, Mitsubishi is reinforcing the facelifted Strada with a bunch of new safety and driving assistance features. Assisting the driver are the Forward Collision Mitigation, Rear Cross Traffic Alert, and Blind Spot Warning. And, to avoid misuse of the accelerator pedal, the 2019 Strada has been equipped with Ultrasonic Misacceleration Mitigation System, which is also found in the Montero Sport GT. This prevents sudden accelerator inputs from launching the vehicle forward or backwards, common in parking lots and traffic jam situations. Since there is no information regarding a new engine, we could safely assume that the old 2.4 and 2.5-liter mill will remain firm under the hood. However, the current five-speed automatic transmission will be a six-speed automatic on the 2019 model. This promises to give the truck a buff in acceleration and refinement.

Mitsubishi will start selling the 2019 Strada in Thailand on November 17. This will be followed by a sequential release in ASEAN, Oceanian, Middle Eastern, European, African, and Latin American markets. There were no concrete details as to when exactly it will be introduced on the said regions but the Japanese car manufacturer promises that it will eventually go on sale in 150 countries across the globe. Now, let’s keep calm and wait for Mitsubishi Motors Philippines Corporation to make the announcement.