Finally, BMW has pulled the covers off the refreshed 2020 7 Series with major changes inside and out. The facelifted version features bolder design cues, upgraded tech systems, an improved V8 engine, and a new six-cylinder plug-in hybrid electric vehicle.

Looking at the BMW 2020 7 Series, the first thing you’ll notice is the huge kidney grille that has grown by 40% compared to its predecessor, according to the company. The 7 Series also got a more sculpted hood, bulkier fenders, and a new set of LED headlights, which you could also upgrade to BMW’s Laserlight option for an even more powerful visual appeal. With this new look, the 7 Series now closely resembles the brand’s first-ever X7 with three rows. 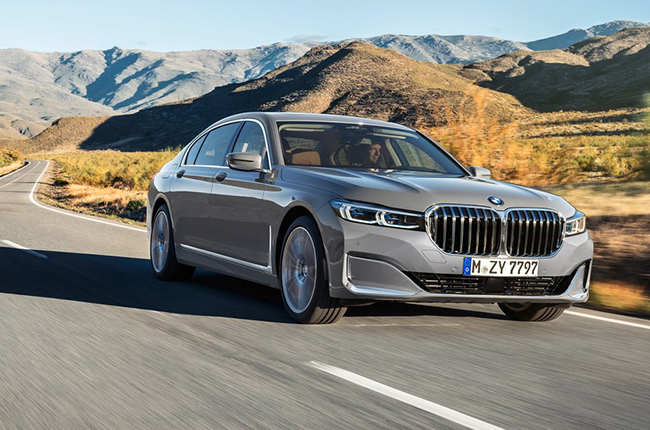 Peeking at the back of the 7 Series, tailpipes have become wider, coated with chrome finish for the standard models, while its M Sport variant is polished with Cerium Grey. The new rear design also features a thin light strip that extends across the tailgate, which connects the rear lights that have slimmed down by 1.4 inches.

Stepping inside the cabin, you will be welcomed by the BMW’s latest generation of the digital instrument cluster and new leather and trim options for premium comfort. If you’re a person who’s always on the go, the 7 series comes standard with wireless charging system placed in front of the cup holders for convenience. Above anything else, one of the huge improvements in the 7 Series is the re-engineered version of the 4.4-liter V8 fitted in the BMX 750i xDrive. This powertrain can now deliver up to 523 hp, which has improved by 80 hp compared to the previous engine, and it can now put out 750 Nm of torque, which has increased by 100 Nm than the outgoing model. This new V8 powered mill can blast off from 0 to 100 km/h in just 3.9 seconds.

Meanwhile, the BMW M760i xDrive is another highlight on the 7 Series, as it is equipped with a V12 engine that has a displacement of 6.6-liters, capable of churning out 600 hp and has the ability to go from 0 to 100 km/h in just 3.6 seconds. According to BMW, the 7 Series will also be offered in a plug-in hybrid version during its launch in March this year. In terms of power, the hybrid version will combine a six-cylinder inline engine that can deliver 280 hp, along with an electric motor rated at 113 hp, which boasts a combined output of 389 hp. These figures then allow the BMW 745e xDrive to accelerate from 0 to 60 mph in 4.9 seconds record time. However, the German carmaker hasn’t disclosed the all-electric driving range yet.

Adding to BMW’s numerous enhancements is the revised eight-speed automatic transmission which is the now the standard gearbox on all models for 2020. This upgrade aims to deliver quicker and flawless gear shifts as it is equipped with a Launch Control function for increased traction during acceleration.

The BMW 2020 7 Series will have five specifications, comprised of four AWD models and one RWD. As of now, the German marque hasn’t released the complete price list yet.

Would this sophisticated sedan be able to land on the Philippine shores? Well, the 2019 7 Series managed to debut here in the country, so this facelifted version isn’t that far from our reach, don’t you think? Let’s keep our fingers crossed, folks!