BMW has launched the facelift for its 5 Series sedan. The refresh gives the vehicle a new mild-hybrid and plug-in hybrid powertrain options. Design-wise the 5 Series still retains a familiar look, however, there is more to the vehicle as it now comes with a new set of headlights. These headlights are sleeker and now come with more linear LED running lights which brings it much closer in terms of looks to its 3 Series sibling. The signature BMW kidney grille has also been updated, which now comes with wider and longer pieces. A revised front fascia is also available for M-Sport models. Even the rear lights of the vehicle get a couple of tweaks in the form of new L-shaped signature inlays that match the headlights. It also now comes with a new set of wheels to complement the new look. 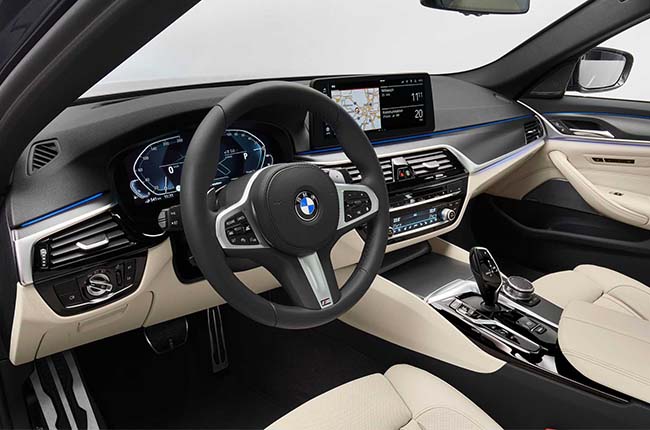 Other new features for the vehicle include BMW’s latest iDrive 7, a new 12.3-inch digital instrument cluster, and a new infotainment system of the same size. The large infotainment system now comes with the German brand’s native navigation software, along with Apple CarPlay and Android Auto. With the addition of this new technology, it has made the vehicle easier to use with its intuitive menu layouts, quick response time, and new graphics. Where power is concerned, the BMW 5 Series will still be retaining the same four powertrain offerings it had before. The standout powertrain for the vehicle is its new 48-volt mild-hybrid system that comes with the 6-cylinder 540i model. The power for the 540i trim level remains the same at 335 hp. With the additional torque, the vehicle’s acceleration has improved but by how much is yet to be tested.

The 530e plug-in hybrid on the other hand produces 288 hp and 420 Nm of torque through its 2.0-liter turbocharged hybrid engine. The addition of the hybrid system gives this specific trim a 40hp over its outgoing model. A new feature is now available in the form of “XtraBoost” which is available for only 10 seconds with the accelerator floor.

Moving on to the M550i XDrive its output remains the same coming in at 523 hp and 723 Nm of torque from its 4.4-liter V8 engine. Acceleration from 0-100 is still quick with a 3.6 second time. This variant still retains the same top speed of 250km/h. In order to keep its performance up the M550i comes with a new sport transmission that lets it shift faster.

As to when the refresh BMW 5 Series will be entering the local market is still unknown. BMW Philippines has yet to release a statement with regards to if and when it could possibly bring in the new model into the country.

Get Notified About BMW 5 Series News