BMW Philippines, under SMC Asia Car Distributors Corporation, is proud to announce the availability of the new BMW 2 Series Coupe and its price starts at just P3,690,000. Joining the coupe was the BMW iX, which will serve as the brand’s first all-electric vehicle for the Philippines. The RSA Motors team introduced the coupe first to much acclaim, also stating that the nameplate will serve as the basis for the M2. BMW Philippines did not state anything else on the matter, but it’s within reason to speculate that the performance coupe could make an appearance in the Philippines sometime in the near future. As for the specifications of the 2 series, the sole version available for sale will come with the M Sport package, which borrows a few styling elements and cues from the M3 and M4 models. Despite being a coupe, the new ‘2’ features a two-plus-two seating configuration. The front end is dominated by a large kidney grille and flanked by two LED headlights. Flowing to the roofline, the 2 series features an elongated hood, sloping roofline, and a short rear end that is also home to the LED taillights. If you look closely, the ‘M’ badge can be found on several panels denoting that it’s a variant with more flare than your average BMW. It’s still rather compact coming in at 4,537 mm long, 1,838 mm wide, and 1,390 mm tall, and it rides on a wheelbase of 2,975 mm. Underneath the exterior enhancements, BMW added a few performance parts to the 2 series in the form of M aero and M Sport suspension. There are also M Sport exclusive alloy wheels that are wrapped in run-flat tires. Jumping into the cabin, you’re greeted in typical BMW fashion, straightforward, well done, and focused on the drive. The driver is cocooned in leather and soft-touch injection molded panels along with high-quality sport seats with Alcantara splashed throughout. Look overhead and even the headliner was touched by the M Sport package, coming in a shade called Anthracite. BMW also outfitted it with a 10.25-inch display for its infotainment and it uses the brand’s iDrive system which is now in its seventh version for this model. The audio system outputs to a 10-speaker audio system by Harman/Kardon.

Powering the coupe is a 181 hp-capable 2.0-liter TwinPower Turbo inline-four engine that also makes 300 Nm of torque. As an entry-level BMW, the motor does well to get up to speed with a 0 to 100 km/h time of 7.5 seconds. While the 2 Series grabbed attention, the BMW iX stole the show. The EV is officially the first all-electric model to be offered by SMC Asia Car Distributors Corporation. As far as premium EVs go, BMW Philippines is in a good position, price-wise, with the iX’s tag tipping the scales at P6,290,000. While that may be a bit of an ask, for now, BMW Philippines state that you will be given everything you need to start off your EV ownership thanks to the wall charger box being included in the sale of the vehicle. On top of that, BMW will install the box in your garage. 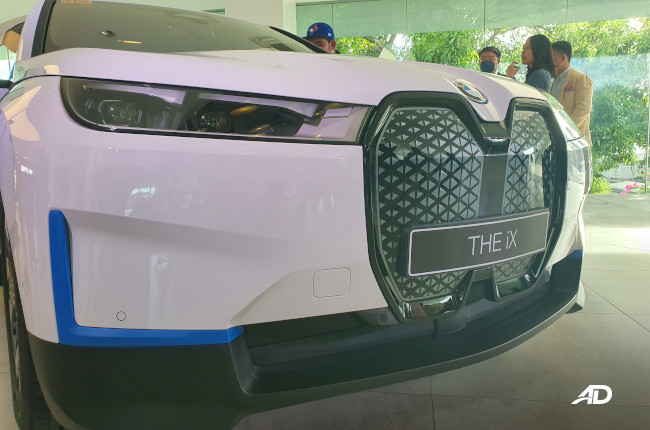 On the vehicle itself, the iX is stunning thanks to its future-forward design that contrasted the angular and aggressive design of the 2 Series presented prior. The design language is smooth and sleek, with BMW’s next-generation kidney “grille” dominating the front end. We say grille because there is no engine behind it hence no need for openings. On top of that, you get several EV-specific design elements like the aerodynamic wheels, smooth front, and smooth rear that maximize efficiency while at speed. 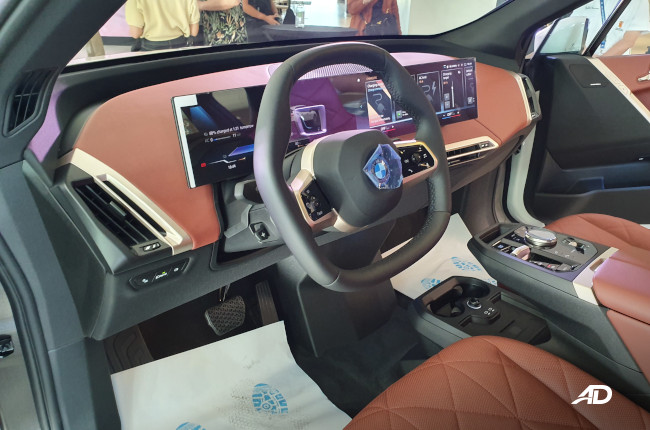 The iX is about the same size as the BMW X5, but its interior is nowhere near the same as the gasoline-powered crossover as it comes with an interior design that is unique to the iX adopting a lounge-like seating arrangement along with an overall minimalist design. The infotainment system is also a radical departure from the standard arrangement that BMW utilizes for its vehicles as it joins the gauge cluster and the infotainment in one continuous panel. Harman/Kardon also played a part in the infotainment system of this vehicle. Powerwise, the iX comes with an all-wheel-drivetrain that uses two electric motors to power both the front and rear wheels. Combined, both motors produce 321 hp and 630 Nm of torque and the iX can last 372 km on a single charge. Currently, the iX is available for pre-order, with a price tag of P6,290,000 and early adopters won’t have to worry about longevity as it comes with an 8-year high-voltage battery warranty, a 6-year service warranty, and a 5-year BMW Factory warranty.