Geely Philippines has been teasing its new sedan for quite some time now, while the specs were still unknown, the automaker has officially decided to launch the new model. Meet the 2022 Geely Emgrand, its the brand’s fourth model in the country and its first sedan. Aside from this, it is also the brand’s first vehicle to come with a naturally aspirated motor. With that said, let's see what the new Emgrand brings to the subcompact sedan area. In terms of style, the Geely Emgrand still retains the brand’s design language. It comes with a sleek front end, which is accentuated by the large grille which is flanked on either side by sharp headlights. In the case of the entry-level model, it only comes with projector halogens, while the higher-end variant gets LEDs.

Moving onto the side of the sedan and you get clean lines throughout along with a nice belt-line that extends from the front of the vehicle and goes all the way to the rear. This belt-line also acts to contour the shape of the sedan giving it a slightly wider look and feel. Aside from this, the Emgrand also gets a set of 17-inch alloy wheels for its higher-end variant, the lower model only gets 15-inch steel wheels with hub caps. At the back, the Emgrand comes with full-width taillights that also come with a unique start-up sequence as a nice party trick. 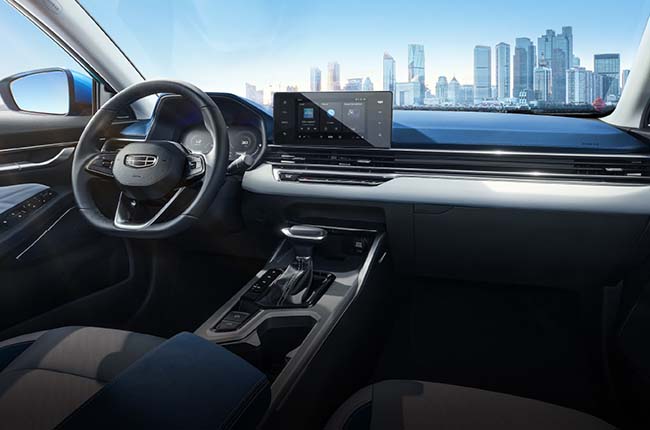 The inside of the new Geely Emgrand comes with a premium-looking and premium-feeling interior. This can be seen in its dual-layer minimalistic dashboard that comes with interior highlights that give the vehicle a much brighter cabin. This holds especially if you choose to go with the Premium variant at it comes with a unique blue and white color combination for its cabin. Just like the rest of the models, Geely has done well to equip the vehicle to maintain a premium yet affordable stance in the market. As for its space, the Emgrand comes with 500-liters worth of it at the rear, thanks to a massive trunk. For its technology, the Emgrand comes with a 12.3-inch instrument panel and an 8-inch infotainment system. It is important to note that the higher-end model does come with a sunroof, but it can only be controlled from the infotainment system. Aside from this, the sedan also comes with an electronic air conditioning system and rear AC vents as well. Here is where the Geely Emgrand separates itself from the rest of the brand’s other locally available models. Instead of being equipped with a turbocharged 3-cylinder engine, the automaker has decided to give it a 1.5-liter naturally aspirated 4-cylinder engine. While it's not the most powerful engine that Geely has to offer, it does produce 102hp and 142 Nm of torque. Power is sent to the front wheels via a CVT that also comes with eight simulated gears. For the lower variants, a five-speed manual transmission is also available. Interested buyers of the Emgrand will be happy to know that there is a P50,000 discount available for the sedan but only for a limited time. Aside from this, new owners will also be entitled to a 1-year free PMS.