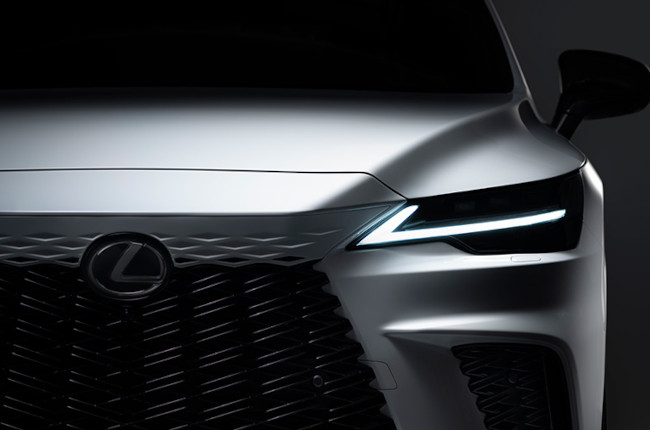 Lexus told us to mark our calendars for June 1, 2022, to anticipate the global unveiling of the brand’s 2023 RX model. Fans of the RX appreciate the midsize crossover for its refinement and space in a premium package that only Lexus knows how to make and deliver.

The teaser image details the front end of the vehicle in which we can pick out a few details.  The headlight and a portion of the front grille has not only kept the spindle pattern that many have grown to love but it also has a new panel that makes the grille look like it’s melting into the front bumper, that being said, it appears that Lexus will be adopting a new pattern for its grilles moving forward. Other design cues that we can take from the teaser include the signature Lexus DRL along with what appears to be a vent of some sort or perhaps an expanded section of the headlight.

This is all just a glimpse of the luxury brand’s newest model, which happens to be one of its best-sellers in the country. The model that we currently have in the Philippines is the fourth-generation Lexus RX which was launched back in 2015. After seven years on the world stage, and a mid-cycle refresh, it seems about right for Lexus to make a change and launch a brand-new model.

No other parts of the model were shown by Lexus, but we can expect the model to still come with gasoline and hybrid variants when it does debut and eventually come to the Philippines. The 3.5-liter V6 engine is still to be expected for the model, as will the hybrid powertrains that the 450h variants of the outgoing RX come with. Following that, however, it’s uncertain whether Lexus will be pushing forward with its EV plans in the future given that the RZ was released last month.

Now the question is, “when will Lexus Philippines bring the new RX over?” That remains to be seen for now, but first catch the global unveiling of the brand new RX at 9:00 AM in Japan on June 1, 2022. For us in the Philippines, tune in at 8:00 AM if you want to see the global reveal.