The original Mitsubishi Xpander made waves when it first arrived in the local market in 2018. The MPV immediately sold like hotcakes as it filled a need for affordable and stylish seven-seater vehicles. After four years of market dominance, it seems the time was right for Mitsubishi to give the MPV a makeover—and that it did.

We first saw the refreshed Xpander last year when it debuted in other markets. Then, in March, we finally saw the new MPV in the metal. Mitsubishi has pegged the facelifted version as an improvement over the previous model, but what are all the things that make it better? The Xpander was already a snazzy-looking MPV at the time of its launch, but the new model ups the ante by going with an even more modern look. It features a redesigned front grille and bumper, matching T-shaped headlamps and taillamps, and sharp 17-inch alloy wheels.

Color options for the new Xpander include Blade Silver Metallic, Graphite Gray, Quartz White Pearl, Red Metallic, and Jet Black Mica. With its updated look and variety of color options, it's clear that the Xpander is looking to stay ahead of its competitors. The exterior isn't the only facet that has been improved. The inside of the new Xpander has evolved as well, this time around featuring a more ergonomic, horizontal dashboard with added soft-touch materials and synthetic leather.

Like the outside, the interior of the Xpander benefits from a modern and minimalist approach. Overall, it's a marked improvement over the previous model. Not to take anything away from that vehicle, but its interior design has started to look dated. After all, it is four years old, and an update was bound to come sooner rather than later. These days, many car buyers include a capable infotainment system atop their list of must-haves in a new vehicle. Mitsubishi is well aware of this. Perhaps it's why it equipped the refreshed Xpander with a new seven-inch touchscreen infotainment unit.

The system comes standard in all variants, and those in the know will quickly realize it's the same unit seen in the Mirage G4. While it's not the largest or most advanced display in the world, it's a significant upgrade over the previous model's system, which Mitsubishi sourced from a third-party supplier.

Now the seven-inch unit comes with Apple CarPlay and Android Auto, two of the leading smartphone connectivity features buyers look for today. It also has button controls, which we believe is always a good idea. The new Mitsubishi Xpander is more technologically advanced than ever before, although we're not sure that's saying much, as it was never a tech-packed vehicle in the first place.

Still, we think prospective buyers will be delighted to know that the Xpander now has features like an electronic parking brake and digital air conditioning controls on the GLS AT model. The same variant also gets hill start assist, traction control, and active stability control for a safer and more convenient ride.

Meanwhile, all variants now get a reverse camera as standard to go along with the usual dual SRS airbags. 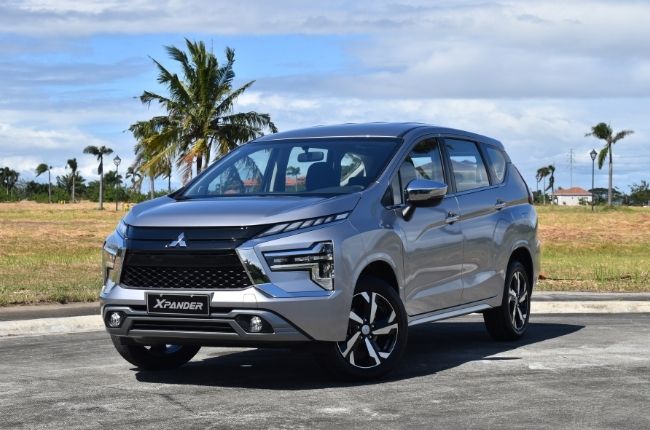 The previous Xpander was already one of the best-handling models in its class, but the facelift necessitated some changes to keep this status intact. The new model stands a few millimeters higher than the outgoing model, so Mitsubishi had to do something to preserve the Xpander's handling.

In that regard, the refreshed Xpander features a retuned suspension system that has likely been made stiffer to mitigate body roll. All things considered, it doesn't noticeably change how the Xpander handles in most conditions, and that's probably a good thing. The good thing is the MPV now boasts a more SUV-like stance than before, and it did this without compromising the ride quality.