The Mitsubishi Outlander has recently made its global debut. Aside from its revolutionary design, this fourth generation model also features a range of technological upgrades as well as interior refinements which make it quite a departure from its predecessor.

Related: Mitsubishi Philippines’ January sales was led by the L300 and Strada Exterior-wise, the compact crossover features the brand’s ‘Bold Stride’ design language, therefore, embodying a bold, adventurous attitude, along with a sense of confidence to move forward. Upon further observation, the body showcases a powerful surface that’s accentuated with some strong character lines.

One of the main highlights of the exterior is Mitsubishi’s next-generation Dynamic Shield frontend, a familiar design cue that has been applied on most of its stablemates. The lighting system also has that Mitsubishi-fashioned setup, like the one on the Xpander, Montero Sport, and even on the facelifted Eclipse Cross. As for the wheels, the all-new Outlander comes with a set of 20-inch alloys. 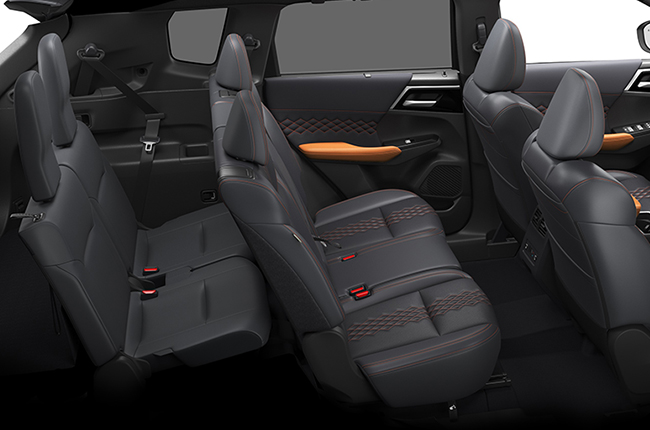 On the inside, cabin space has been enhanced all thanks to its wider body. Legroom has also been increased, plus, it’s also one of the few in its segment to offer third-row seating. Material quality has also been noticeably improved,  compared with  its previous generation. This is complemented by the generous amount of soft-touch points, as well as the genuine leather seats accentuated with detailed stitching. Its interior color scheme and seat material do vary per trim. The all-new Mitsubishi Outlander sits on a newly developed platform and runs on a non-turbo 2.5-liter gasoline engine. Power figures we’re undisclosed, however, it could have similar numbers of the Nissan Rogue/Xtrail’s engine given the ongoing alliance between the two Japanese automakers and Renault. If this is the case, then its mill should produce 179 hp and 245 Nm of torque. As for transmission, it is mated to a 8-speed sport mode Continuously Variable Transmission (CVT). Two-wheel drive models send power to the front wheels, while all-wheel-drive variants come with a Super-All Wheel Control (S-AWC).

Apart from the standard 11 -airbags, the all-new compact crossover gets a suite of advanced driver-assist features such as Adaptive Cruise Control (ACC) and Lane Keep Assist (LKA). Notably, it is also reinforced with Mitsubishi Connect, therefore enabling a driver to reach emergency assistance, theft alert, remote start-up and shut-off, and parking locator when needed.

While we still get the third-generation PHEV model locally, it might still take some time for the all-new model to be available in the country. The three-row setup of the all-new Mitsubishi Outlander could somewhat interfere with Montero Sport sales if it is to be brought here in the future. Then again, let’s just wait for an official confirmation from the brand. In the meantime, our fingers are crossed.