A few months ago, Aston Martin and Red Bull Racing (RBR) Formula 1 team gave us a teaser of their hypercar joint project. Now, they've pulled the wraps and showed the world the fruit of their innovative partnership – the AM-RB 001.

The 3 men who made this concept a reality are Red Bull Racing’s Chief Technical Officer Adrian Newey; Aston Martin Executive Vice President and Chief Creative Officer Marek Reichman; and Vice President and Chief Special Operations Officer David King. Each offer their extensive skills and experience in the automotive industry in building this project. Offered as a road-legal car, the AM-RB 001 is built with a lightweight carbon fiber structure capable of withstanding high levels of downforce. This was made possible by Newey’s brilliant design of the underfloor aerodynamics giving Reichman the freedom to create its shell’s elegant and cutting-edge design.

The AM-RB 001 will also feature an innovative suspension system that will make use of Newey’s skills honed over his 30-year career. Its transmission, which will be designed and built from scratch, will be done by Newey and Red Bull Advanced Technologies. 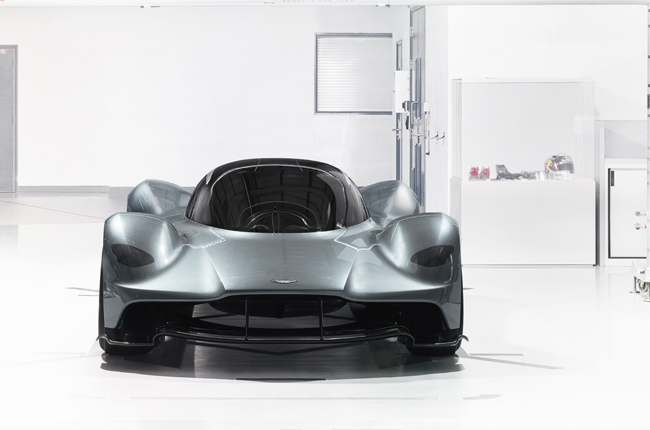 The AM-RB 001 will have a new, mid-mounted, high-revving naturally aspirated V12 engine. Unfortunately, we’ll have to wait a bit for the technical specs. However, they were kind enough to tease us some more. According to Aston Martin and RBR, this hypercar has the potential of producing a 1:1 power-to-weight ratio while offering genuine comfort and space for both driver and passenger.

Aston Martin and RBR also announced that they are developing a track-only AM-RB 001. It is said to have a projected performance equal to today’s LMP1 racecar. King and his team will be building this car from the ground up in the purpose-built facility located in Gaydon, United Kingdom. Around 99 to 150 units of the AM-RB 001 will be built which includes all remaining prototypes and 25 track-only versions. First deliveries will begin in 2018.

For more information about Aston Martin and their vehicles, visit the AutoDeal Car Guide.