We all know that the car’s suspension is constantly at work whenever we hit the road. As it absorbs the potholes and the rough terrain, the suspension moves up and down which generates kinetic energy. With that in mind, Audi is working on how to harness that energy and turn it into electricity.

Audi’s electromechanical rotary dampers, or dubbed as eROT, replace the conventional hydraulic dampers. In this way, the German automaker said that the eROT can absorb the motion of the wheel and transfer it to an electric motor, which converts it to electricity.

To shed more light regarding this matter, Audi board member for technical development Dr. Stefan Knirsch said that, “Every pothole, every bump, every curve induces kinetic energy in the car. Today's dampers absorb this energy, which is lost in the form of heat. With the new electromechanical damper system in the 48-volt electrical system, we put this energy to use.” 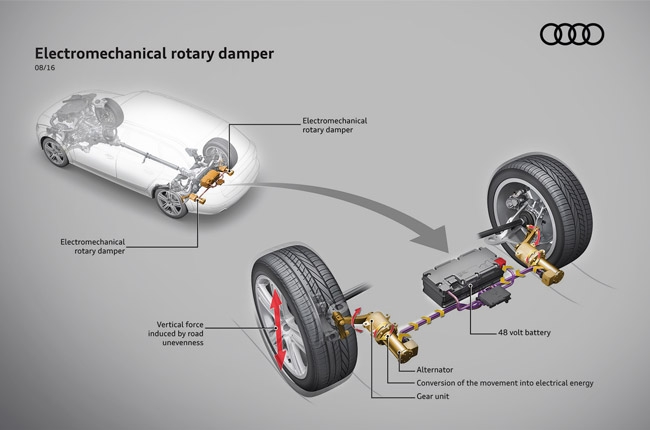 Audi added that the eROT system recovered 3 watts on a freshly paved German freeway and 613 watts on a rough road. The automaker claims that these numbers translates to relatively better fuel economy.

In addition, the eROT system allows configuring or tuning the compression and rebound rates separately. On the other hand, the horizontally arranged electric motors in the rear axle replace the upright telescopic shock absorbers, increasing the trunk space.

For more information about Audi and its vehicles, visit the AutoDeal Car Guide.