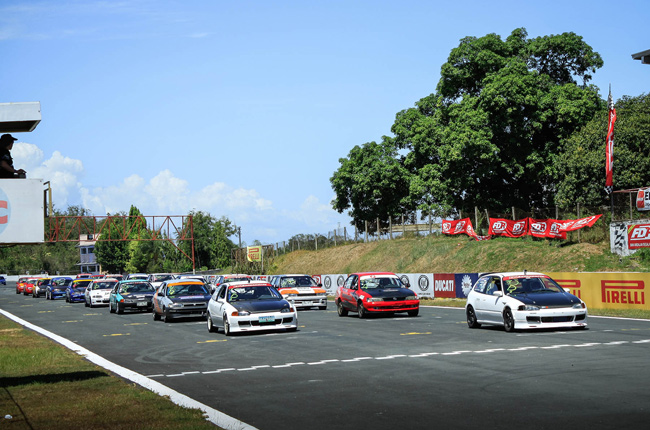 Under the blazing sunlight and the watchful eye of the Automobile Association of the Philippines (AAP), the event boasted a total of 51 drivers battling for supremacy in the Time Trials and Grid Races.

Bracket A was highlighted with the fastest machines on the grid. After the dust settled, Eduardo Suiza came out on top with a blistering time of 1:48.479. Not far behind were Niňo Garcia and Eduardo Pujol who took 2nd and 3rd places, respectively.

Things in Bracket B were as intense as the day’s heat as the top 3 drivers crossed the line within a fraction of a second separating them. The timer stopped at 1:56:240 for Gabby Sohu, thus earning him the top spot. Then, Sydney Sarmiento came in 2nd place at 1:56:255. The 3rd fastest was Dominique Bon with his best time of 1:56:301.

Bracket C was where Gabby’s younger brother Miggy Sohu dominated with a best lap time of 1:59:049. He was closely followed by Joey Howard in 2nd and Paolo Lofamia in 3rd. Bracket D, on the other hand, saw Polo Bautista stopping the clock with a 1st place-winning time of 2:02:220. Coming in 2nd and 3rd places were Sherwin Bargos and Niel Bryan Diaz, respectively.

In Bracket E, Zacharry Mendoza raced home with a 1st place finish, cutting off Raymond De Pano’s winning streak. De Pano settled for 2nd place, just ahead of Miguel Dela Cruz in 3rd. Meanwhile, a total of 9 drivers competed in Bracket F, and besting them all was Anthony Richard Lanting. Behind him were Jack Saquilayan in 2nd and Florentino Gonzales in 3rd.

Down in Bracket G, Robert Tan, Bryan Firme, and Mark Macas stepped on the podium in that order. In the open class Bracket R, Dominique Bon came ahead with the win. He was followed by Eduardo Suiza and Niňo Garcia in 2nd and 3rd places, respectively. Round 1 and 2 winner JC Baguisa failed to clock in a proper time as he was hounded with mechanical problems. The weekend’s action went even hotter during the Grid Races. A total of 18 cars from the combined Grids A, B, and C filled up the starting group. In GT Radial Grid A, JC Baguisa locked up his brakes as he was fighting for the lead. The error caused him to hit Eduardo Suiza. Niňo Garcia capitalized on that incident and crossed the line, 13.144 sec ahead of Rafael La’O in 2nd and Eduardo Pujol in 3rd.

1st and 2nd positions for the Smart Fuels Grid B were taken by Dominique Bon and Andrew De Asis, respectively. Gabby Sohu, Ed Christian Go, and Sydney Sarmiento were all engaged on a tight battle for the final spot. But Sohu proved his prowess and clinched 3rd place. Go and Sarmiento, on the other hand, faced 4-minute penalties after breaking out.

The Works Bell Grid E capped off the race weekend with 11 drivers on track. When the checkered flag was waved, it was Robert Tan who emerged as the winner. Joining him on the podium were Leo Candava and Marlo Marcos who crossed the line in that order.

Catch the intense racing action again on June 4, 2016 as the GT Radial FlatOut Race Series (FORS) heads up North for Round 4 at the Clark International Speedway (CIS). 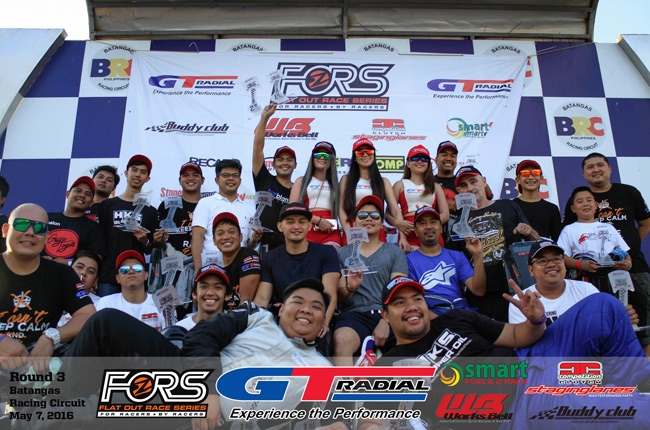