Over 80 entries participated in the 3rd round of the FlatOut Race Series (FORS) held at the Batangas Racing Circuit (BRC) last May 20, 2017. A cloudy overcast and several rain showers didn’t dampen the spirits of the racers as the premier grassroots motorsport event featured thrilling wheel-to-wheel action throughout.

Blanche Racing’s JC Baguisa set a blistering 1:49.792 lap time around BRC during the morning’s Time Attack session. This was enough for him to claim the top spot for Bracket R and Bracket A, as well as the pole-position for the Grid race.

Rafael La O’ in his #1 Honda Civic EK followed just .013 seconds behind in 2nd, while previous champion Eduardo Suiza followed only .016 seconds back in 3rd. In Bracket B, Jero Consing in the #133 Honda Civic EG hatchback earned 1st after a 1:56.006 lap time. Aaron Lao duplicated his performance from the last round and finished in 2nd, while Zebedee Mendoza claimed 3rd.

Meanwhile, Bracket D saw the top 3 drivers Andrei Lim, Kikong Dela Rama, and Arbie Jacinto separated by just .098 seconds. It was Lim who came out on top, followed by Dela Rama in 2nd and Jacinto in 3rd.

Bracket E had the closest gap of the day as only .005 seconds separated Mark Bernardo in 1st and Mars Ocampo in 2nd. Meanwhile, Lars Alonso finished in 1st in Bracket F. He was followed by Robert Tan in 2nd and Ralph Tan in 3rd. Lastly, Bracket G's top honors went to Francisco Blanco in 1st, Andre Makkina Tan in 2nd, and Greg Suing in 3rd.

Dondon Portugal's impressive start helped him jump into the lead of the GT Radial Grid A race. From then on, he was able to create a 20 second gap until he crossed the line in 1st. Pole-sitter JC Baguisa managed to salvage 2nd after an intense battle with Eduardo Suiza, who later dropped to 5th. Rafael La O' finish 3rd in a borrowed Mitsubishi Lancer Evolution after his car broke down in the morning.

Another thrilling battle brewed during the KYB Grid B as Blanche Racing teammates Aaron Lao and Andrew De Asis traded places each lap. Lao was able to finish 1st as he successfully fend off his teammate. He was then followed by De Asis in 2nd and Francis Roger Talan in 3rd. 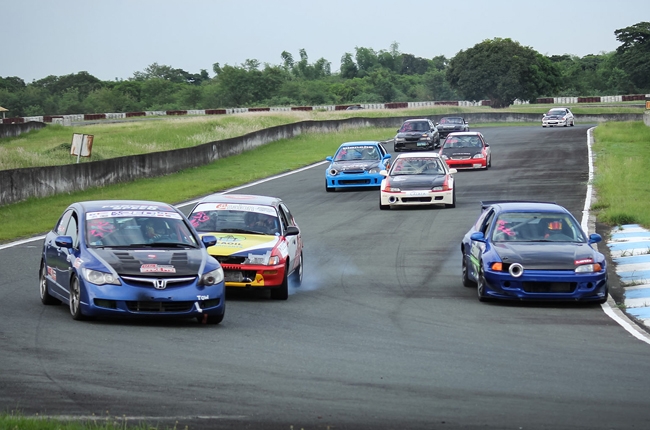 For SmartFuels Grid C, Paul santos cruised to victory in 1st while Arbie Jacinto followed a lap behind in 2nd.

The Recaro Grid D race featured the largest grid with 10 racers. Raymond De Pano in the #480 SB Salon Toyota Corolla AE92 set the pace early on. Unfortunately, he retired with just 3 laps remaining. With the lead up for grabs, Zacharry Mendoza, Mark Edwin Bayan, Jack Saquilayan, Robbie Alvarez, and Andrei Lim were in a 5-way battle for the win. As the race got exciting, all 5 drivers exceeded the maximum lap time and were eventually penalized. As a result, Paolo Santos was awarded with the win, followed by Mark Bernardo in 2nd, and Ronn Catindig in 3rd.

Pathrick Bautista in his #520 Mazda2 won the Works Bell Grid E in dramatic fashion. Bautista crossed the line just .073 seconds ahead of Ralph Tan’s #69 Honda Civic EG while 3rd spot went to Lars Alonso, who was 1.5 seconds behind. The next round of FORS will happen on June 3 at the Batangas Racing Circuit, while the inaugural GT Radial x 4 Oras ng Pilipinas endurance race will be held on June 4.