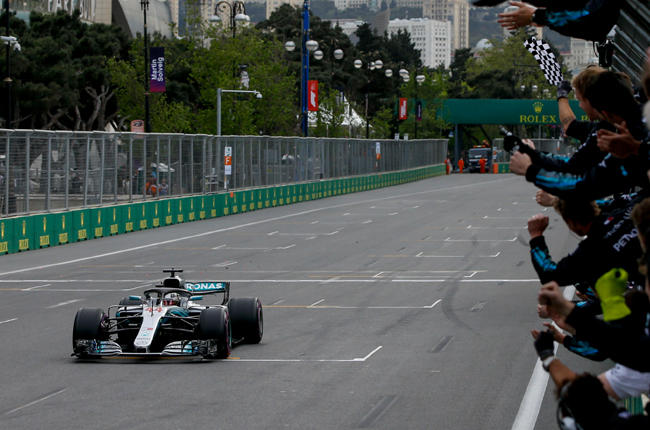 Mercedes-AMG’s Lewis Hamilton survived the dramatic Azerbaijan Grand Prix to claim this first win in the 2018 Formula 1 (F1) season. With this, the Britton is now the leader in the driver’s championship, with a four-point gap from Ferrar’s Sebastian Vettel. The start of the race provided plenty of thrilling action as cars forced their way into the tight turns of the street circuit. The rundown to turn two saw Force India’s Sergio Perez Ocon and Williams’ Sergei Sirotkin briefly making contact with each other, scattering debris on the track.

On the second drag reduction system (DRS) zone, a three-way collision between Sirotkin, McLaren’s Fernando Alonso, and Renault’s Nico Hulkenburg laid down even more debris. Sirotkin’s race would end there, Alonso barely made it into the pits with two punctured tires, while Hulkenburg escaped unscathed.

Turn three also contributed more carnage as the other Force India car, driven by Esteban Ocon, squeezed Ferrari’s Kimi Raikkonen, sending him onto the wall. Ocon, too, had to retire due to the damage. With all this events, the safety car came out allowing marshals to clean up the track. As the race resumed, a tight battle for fourth ensued between Red Bull Racing’s Daniel Ricciardo and Max Verstappen. Just when things looked like both drivers settled their battle midway to the race, Ricciardo made a late lunge towards turn one, placed the car on the right, and then to the left. Verstappen, desperate to keep his position, made two defensive moves (which is illegal, by the way) and left no space for his teammate. This caused a huge collision between the two drivers which put them out of the race and forced the safety car to come out on track once again.

With only eight laps left on the race, a late self-inflicted crash by Haas’ Romain Grosjean made the safety car stay out longer. When the race resumed, fans were treated with a three-lap shootout between 15 drivers, five of which were all in the mix to take the lead. Mercedes-AMG’s Valtteri Bottas was ahead of the pack, while Vettel, Hamilton, Raikkonen, and Perez followed closely behind. Vettel tried to overtake Bottas on turn one but locked his tires, dropping him down to fourth. On lap 50, however, Bottas retired after he ran over some debris on the main straight, which punctured his car’s tires.

Hamilton inherited the lead and maintained it all the way to the finish line. Raikkonen followed in second, while Perez took advantage of Vettel’s mishap to take the final place in the podium. The next race of the 2018 Formula 1 season will be in Barcelona Spain on May 13.